The forthcoming Erdogan-Biden meeting on June 14 comes at a time when Erdogan is experiencing his weakest term in his very long reign. 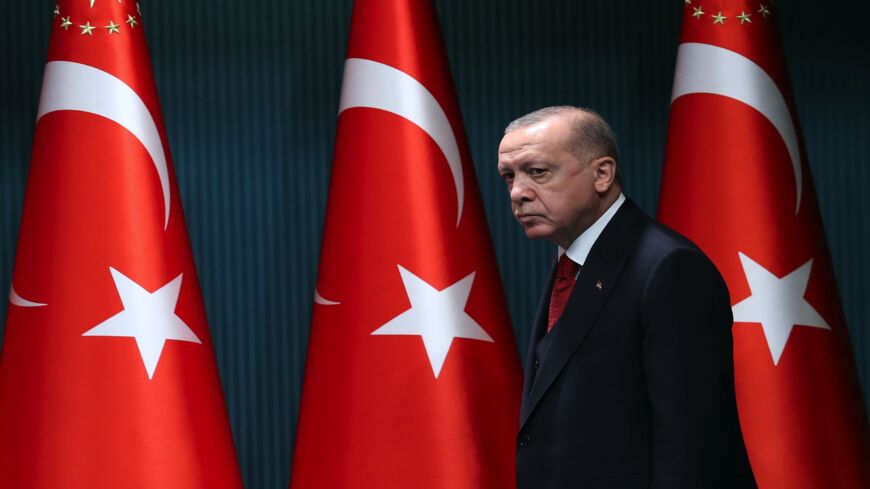 President of Turkey Recep Tayyip Erdogan arrives to give a press conference after a Cabinet meeting at the Presidential Complex in Ankara, Turkey, on Sept. 21, 2020. - ADEM ALTAN/AFP via Getty Images

For a long period of time, Turkey’s President Recep Tayyip Erdogan looked mighty, especially from within Turkey. He was charismatic, a great orator, a shrewd tactician, imposing and even bullish. He mesmerized many of his countrymen. His numerous sycophants called him “Reis” in Turkish, without pronouncing any official title or his name. The connotation of Reis in Turkish is "leader," and nobody needed to inquire who the Reis might be. Nobody could be other than Erdogan. His cronies went that far to glorify him as the “global leader.” His charm and strength could not be confined to Turkey; it had to go much beyond that, to the global level.

Those were the days. Erdogan will be meeting with the president of the United States, Joseph Biden, in the weakest moment of his almost two-decade-old reign in Turkey. He is not coping well with the mounting problems he faces in the economy, further aggravated by the COVID-19 pandemic. Inflation is soaring by double digits, and unemployment is increasing. At the same time, the small businesses that provided solid support to him for years have become the sources of discontent, accelerating erosion of his approval ratings.

The polls indicate his popularity is dwindling every passing day. The elections are scheduled for the year 2023. If the current adverse trends cannot be controlled, it looks more and more difficult for Erdogan to survive politically in the electoral processes, as the local elections in 2019 aptly demonstrated. He lost all the important metropolitan centers that produce two-thirds of Turkey’s gross national product.

His ever-weakening posture inside the country is taking mortal blows from the revelations of a mobster. Once an ardent Erdogan supporter, Sedat Peker, a well-known underworld personality, started to publish video recordings from his self-imposed exile in the United Arab Emirates, revealing the rampant allegations of corruption under the Erdogan regime.

More importantly, by speaking “from within,” the mobster Peker with his allegations pictured the strong bonds between the Turkish state and organized crime. Millions of Turks follow his videos. Many tend to believe in him rather than the refutations of the officials. His allegations have significance not only in domestic politics, but they also have also international repercussions, because he brought up the massive cocaine trade with Colombia via Venezuela with some Turkish officials and their family members at the highest echelons allegedly involved.

“The world's most colorful political psychodrama is unfolding in Turkey, convulsing the country and its power hierarchy. A top Turkish underworld figure, Sedat Peker, has parted ways from the ruling Erdogan party and is posting long videos on YouTube alleging all manner of crimes by leading figures in government and their allies. Crimes from bribery to murder to rape to drug smuggling and much else like threatening opposition media, commandeering zillions from national banks and corrupting the judiciary so routinely that no rule of law can be said to exist. … Viewed by over 50 million people at last count, the videos have paralyzed governance and cracked the legitimacy of Erdogan's regime,” Turkish-American analyst Melik Kaylan recently wrote in Forbes.

Within this backdrop, a much-weakened Erdogan compared to what he was only a month ago will be meeting with Biden in Brussels on the sidelines of the NATO summit on June 14. That could be the worst timing for Erdogan. On April 24, when Biden had gone the extra mile in recognizing the Armenian Genocide, an unusually submissive Erdogan had emphasized that he and Biden would meet in June. Even then, he was in a better position against Biden despite the heavy blow he had taken.

Yet now, in June 2021, the once-mighty strongman of Turkey is so cornered that he sent signals he is ready for a reset in the troubled relationship between the United States and Turkey for his survival. That is interpreted to mean he is prepared to concede to his American counterpart on many fronts of the American-Turkish controversy.

That is why a respected Turkish international affairs scholar, professor Ilhan Uzgel, assessed that “an administration that once claimed to be the hegemonic regional power is [now] presenting itself only as a ‘useful ally’ for the United States.”

Unlike Donald Trump, Biden does not seem to favor a “transactional relationship” with Erdogan and Turkey. If Biden remains true to his emphasis on the importance of human rights, the rule of law and democracy, and if he prioritizes these for a reset with Turkey, the long-awaited Biden-Erdogan encounter will not provide many dividends some pro-Erdogan hopefuls in Turkey expect.

Some pundits appeared to counsel Biden for a reset even in the United States, but their suggestions mostly sound like appeasement for Erdogan. Their arguments seemingly developed for the sake of the interests of NATO, therefore keeping Turkey on board. However, experience demonstrated that if the relationship is based on give-and-take, it legitimized the unruly, autocratic elements and those who never acted as real and trustworthy allies. Whenever the allies worked upon shared principles, the alliance became functional.

Unless Erdogan can promise Biden to return to the rule of law and respect human rights and fundamental liberties in Turkey with a sustainable plan, there is nothing significant he can give. Not S-400s, which has become a sine qua non for the amelioration of the relationship. He can only make a pledge on that which he cannot keep. He cannot because only strong leaders of well-functioning countries can play a balancing game between powers. Erdogan is too weak to play such a game between Biden and Putin, and Turkey is not in its moment of diffusing strength.

Wishful thinking cannot reset Turkish-US relations. Neither can the asymmetry between a newly elected American president, who is in a relatively strong position and enjoying an economic revival in his country, and his weakened and ever-weakening Turkish counterpart confronting the economic problems of a country rocking with corruption scandals.

The reset will need to wait for another round.