National Security Council coordinator for the Middle East and North Africa Brett McGurk has worked closely with the Turks for many years on a range of knotty issues, and the growls from Ankara suggest that Turkey continues to pin US policies that it doesn’t like on "rogue" individuals. 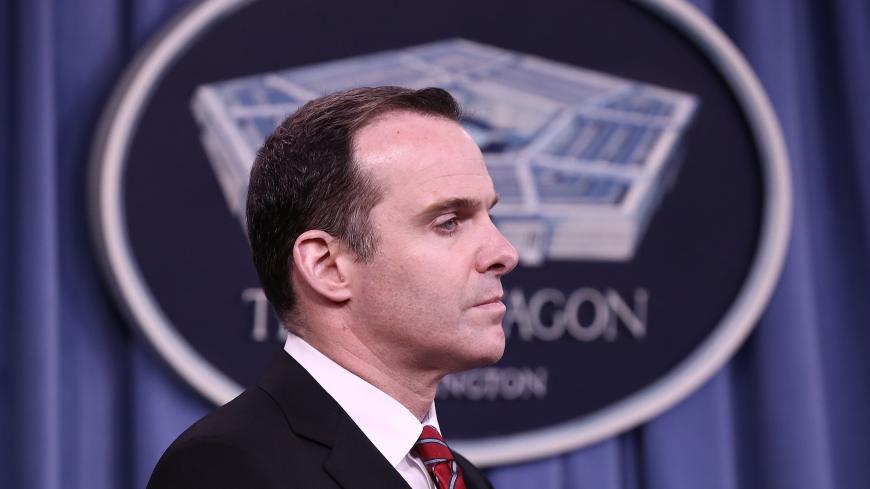 Special presidential envoy for the Global Coalition to Counter ISIS Brett McGurk listens to questions from reporter during a Pentagon briefing May 19, 2017, in Arlington, Virginia. - Win McNamee/Getty Images 1

With the inauguration of Joe Biden as US president, Turkey’s designated nemesis, Brett McGurk, has formally taken over his new position as the National Security Council coordinator for the Middle East and North Africa. “The McGurk thorn in Turkish-American relations,” fumed English-language government mouthpiece Daily Sabah in a Jan. 18 op-ed. The headline summed up the mood in Ankara, where McGurk is widely expected to use his power to undermine Turkey at every opportunity.

“McGurk was the chief architect of the United States’ relationship with the Syrian offshoot of the [Kurdistan Workers Party] PKK terrorist organization, the [People’s Protection Units] YPG. The appointment has dealt a heavy blow and could impact the mending of ties between Ankara and Washington. McGurk’s appointment has sullied the picture,” complained the op-ed’s author, Batu Coskun. Will it really?

The narrative being pushed by circles close to Turkish President Recep Tayyip Erdogan stems from McGurk’s role as counter-Islamic State envoy under two presidents, Barack Obama and Donald Trump. McGurk, together with the US Central Command, oversaw the highly successful partnership with the Syrian Kurdish YPG to defeat IS.

Turkey remains incensed by the alliance because of the YPG’s close links with the PKK, which has been waging an armed insurgency against Turkey since 1984. The reality is, though, that Ankara treats any arrangement empowering the Kurds, be they in Iraq, Iran, Syria or Turkey, as an existential threat. By May 2017, Turkish Foreign Minister Mevlut Cavusoglu was openly campaigning for McGurk to be dismissed. “It would be beneficial if this person is changed,” he told the private broadcaster NTV.

While it’s easy to see why having its NATO ally arm, train and decorate members of a group that was established as the PKK’s Syrian wing would drive Turkey mad, the reason the partnership grew is not McGurk. It’s Turkey’s failure to come up with an alternative force and its laissez faire attitude toward the thousands of foreign fighters who poured into Syria through the Turkish border to expand the “caliphate” that gave rise to Turkey’s image as a patron of the jihadis.

In truth, McGurk worked closely with the Turks for many years traveling to Ankara, meeting with Erdogan and striking up an amicable relationship with his intelligence chief Hakan Fidan, among others, to work on a range of knotty issues including Iraq and its oil trade through the Kurdistan Region.

Yet the anti-McGurk growls from Ankara suggest that Turkey continues to pin US policies that it doesn’t like on individuals and claim those individuals have gone rogue.

“McGurk is not a rogue actor. He’s someone who’s deeply committed to advancing the missions assigned to him by his commander-in-chief and he’s done it for three presidents,” said a Western source with close knowledge of McGurk. “He’s never believed in carving up Syria, just like he’s never believed in carving up Iraq. He’s trying to cultivate strong local partners to advance US interests. He’s driven by matching means with ends and he’s often given few resources to accomplish significant tasks,” the source added. One of his notable successes was negotiating the 2016 prisoner swap with Iran that saw four Americans of Iranian descent including Washington Post reporter Jason Rezaian freed in exchange for seven Iranians who were held on charges of violating sanctions.

A defining characteristic of McGurk is the ease and single-mindedness with which he shapes the missions that he’s assigned. He’s a master at navigating power — a strategist, not an ideologue. As such, if Ankara were to turn a new page, as it keeps claiming it wants to do, it may well find a constructive partner in McGurk, be it in Syria, Iraq, Iran or Libya, over which he now holds sway.

And the Syrian Kurds may discover as their Iraqi brothers did that McGurk does not always pick their side. He was among the fiercest critics of the Iraqi Kurds’ 2017 referendum on independence.

In the first year of the war against IS in 2014, McGurk spent more time in Turkey than any other country in the region. He negotiated the deal to get Turkey to let the coalition carry out airstrikes against IS. It took almost a year. It was again McGurk who secured Turkish agreement to let Iraqi Kurdish peshmerga warriors transit through Turkey to help the YPG end the IS siege of Kobani, the Syrian town on the Turkish border where the US partnership with the Syrian Kurds was first forged.

Yet even after Kobani, Washington’s plan A was to use the Turkish-backed Syrian opposition against IS. Massive US air support helped those forces cross the so-called Marea line and move east to Manbij. The mixed Arab-Kurdish town where IS had planned the bloody Paris attacks would soon become the locus of Turkish-US tensions in Syria.

However, when Turkish-backed forces failed to capture Manbij, the Pentagon gave the YPG-led Syrian Democratic Forces (SDF) the green light on Manbij, allowing them to seize territory west of the Euphrates River for the first time, something Turkey was viscerally opposed to.

The same pattern was repeated in Raqqa. Turkey was given over a year to come up with a rebel force to seize the jihadis’ capital. Ankara instead demanded that the Pentagon provide more US forces — some 10,000 of them — than it was willing to deploy of its own. Once again the SDF stepped in. Raqqa fell in 2017.

The emerging consensus was that Turkey was more motivated to attack the Syrian Kurds than to clear IS from its border.

“Ankara did seek to build with the United States an alternative force through the Train and Equip program. The program failed,” said Aaron Stein, research director for the Foreign Policy Research Institute, a think tank based in Philadelphia. He was referring to a now defunct CIA program to arm and train Syrian opposition rebels inside Turkey. The US plan then became to defeat IS and “given the reality of geography and the need to work through a proxy, the YPG was the only option. Whereas it was a secondary priority for Ankara, as they focused first on the clandestine program to push [out Syrian President Bashar al-] Assad and then to frustrate the YPG’s efforts,” Stein added.

Domestic politics also played a big part in deepening the US-Turkish divide. The Kurds’ dizzying gains in Syria spooked Turkey into pulling the plug on peace talks with the PKK. Up to this day, Erdogan remains convinced that the United States had a finger in the failed attempt to bloodily unseat him in July 2016. It is frequently cited as one of the reasons the Turkish leader decided to acquire Russian S-400 missiles that are designed to shoot down US-made F-16s, which the coup plotters used to bomb the Turkish Parliament.

The move has pushed Turkish-US relations to the brink. Caving to congressional pressure in December, the Trump administration slapped sanctions on Turkey’s state defense procurer under the Countering America’s Adversaries Act.

Turkey has already been kicked out of the F-35 consortium and will not receive any of the fifth generation fighter jets until it's removed the S-400s, or as Stein puts it, “verifies nondeployment” and “nonuse” through a credible monitoring mechanism. Antony Blinken, the Biden administration’s pick for secretary of state, made clear that there will be no shift during his confirmation hearing on Jan. 19. “The idea that a strategic — so-called strategic — partner of ours would actually be in line with one of our biggest strategic competitors in Russia is not acceptable,” he said, hinting that further sanctions might follow.

Erdogan remains adamant, however, that Turkey will take delivery of a second shipment of S-400 batteries. Might he believe that the Biden administration will seek his ouster? His legendary paranoia will have been fed by Biden's refusal to indulge his request for a telephone conversation, as initially reported by the Middle East Eye.

Turkey’s assault against the YPG in October 2019 offered a glimpse of what might follow, with Biden lashing out at Trump for greenlighting the invasion. Biden said he would have never allowed it and called Erdogan an "autocrat."

In December 2018, McGurk quit the administration in protest at Trump’s announcement that he was pulling all US troops out of Kurdish-controlled northeast Syria. (Faced with a congressional outcry, Trump didn't follow through.) Freed of his bureaucratic straitjacket, the 47-year-old former lawyer began publicly taking aim at Turkey over its lax attitude toward IS. How else did Abu Bakr al-Baghdadi find sanctuary so near the Turkish border, McGurk mused in a series of tweets.

In sum, Turkey’s real and self-inflicted problem is with a bipartisan consensus in Congress - and with the new president - that it's Ankara, not McGurk, that is going rogue. The priority, certainly as far as Syria is concerned, will be to undo the damage Trump appointees wrought by silently condoning Turkish aggression against the Kurds and turning a blind eye to the horrific abuses by its rebel proxies. As of Jan. 20 the message from Washington will likely be, “No more free rides."