US and Syria's Kurds: Love on the rocks?

PKK violence is complicating US relations with Syria’s Kurds just as Turkey steps up its cooperation against the Islamic State. 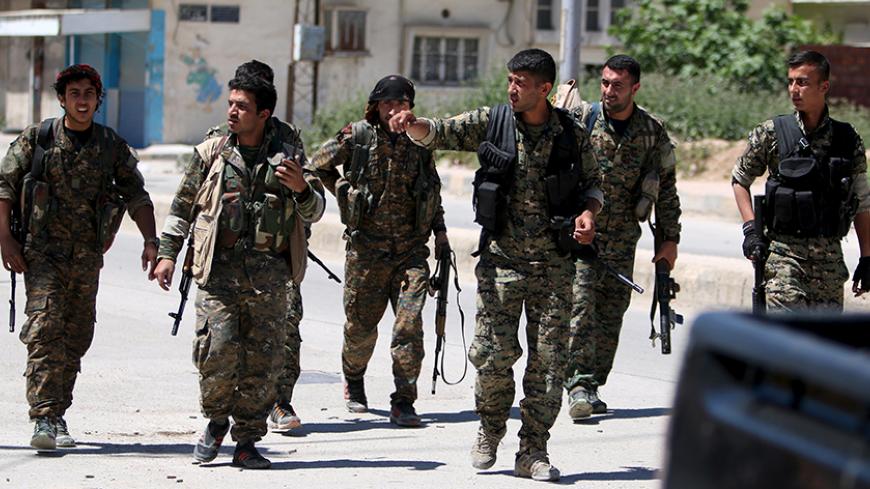 Kurdish fighters from the People's Protection Units (YPG) walk along a street in the Syrian city of Qamishli, April 22, 2016. - REUTERS/Rodi Said

“The Kurds have no friends but the mountains.” This well-worn adage conveys the Kurds’ isolation in the face of centuries of suffering under successive rulers. In Turkey, Iran and Iraq, where the largest concentration of Kurds live, there are plenty of mountains that have provided sanctuary to Kurdish civilians and rebels alike. Not so in Syria, where some 2 million Kurds are largely confined to the arid plains bordering Turkey, putting them at the mercy of their oppressors and the flat terrain.

Yet, in recent times, the Syrian Kurds have seemed invincible. Fighting under the banner of the People’s Protection Units (YPG), they are at the vanguard of the US-led campaign to eradicate the Islamic State (IS) in Syria. Since 2011, when the Syrian conflict erupted, they have gone from being a systematically suppressed minority to a significant player, simultaneously allied with Russia and the United States.

Despite their gains, however, the constantly shifting dynamics of the conflict have left the Syrian Kurds once again feeling vulnerable. In off-the-record conversations with Syrian Kurdish fighters and politicians, a constant theme emerged — whether their newfound partner the United States has an end game for Syria, and if so, where the Kurds fit into it. Barzan Iso, a local analyst with close ties to the Syrian Kurdish administration, summed up growing concerns in a question: “Is the United States’ alliance with the Syrian Kurds part of a broader strategy, or will they dump us and pack up once Daesh [IS] is defeated?”

The question gained urgency on April 20, when Syrian government forces arrested several Kurdish youths in the northeastern border town of Qamishli, where the regime continues to maintain an uneasy presence alongside the Kurds. YPG sources said the youths were detained for avoiding mandatory service in the Syrian army. The ensuing clashes between regime forces and the Asayish (a local Kurdish police force) left dozens dead, but the Kurds prevailed, seizing control of several government positions and dictating the terms of a truce declared April 24.

The regime of Bashar al-Assad remains squarely opposed to Kurdish self-rule. Some speculate that the Qamishli dustup was linked to last month’s declaration of the Federation of Northern Syria, uniting the three Kurdish-majority regions into a single entity. The government and members of the Syrian opposition swiftly denounced the declaration as “illegal.” Washington said it does not recognize the new federal entity either.

Many analysts believe that so long as defeating IS remains the Obama administration’s primary goal, it is unlikely to reverse its policy of avoiding military confrontations with the regime, not even in defense of its Kurdish allies.

“The United States has little interest in engaging the Syrian regime militarily,” said Aaron Stein, a senior resident fellow at the Atlantic Council, in an interview with Al-Monitor. “Such an escalation would run counter to the current strategy, particularly the narrow focus on the Islamic State.”

Daniel Neep, an assistant professor at Georgetown University’s Center for Contemporary Arab Studies, agrees. “If YPG militias were to come under sustained attack from the Assad regime, the US would presumably provide arms and equipment, but chances of air strikes or boots on the ground are effectively zero,” he told Al-Monitor.

US officials, however, have tried to reassure the Kurds that their concerns are unfounded, reminding them that without US military intervention in Kobani, they would not be where they are today. President Barack Obama’s recent authorization for the deployment of 250 additional Special Forces personnel to the 50-member contingent already operating in YPG-controlled areas ought to be proof of the US commitment, officials contend.

In any case, the Syrian regime is unlikely to mount a full-scale attack on the Kurds any time soon. It can ill afford to open a new front against the Kurds while it remains bogged down by rebels elsewhere. The presence of US Special Forces in the Kurdish-controlled areas is another big deterrent.

“The US would not allow its forces to be targeted, so there is obviously a line that the regime cannot cross,” Stein said. Such arguments offer scant comfort to Syria’s Kurds, however.

The United States continues to ignore the Kurds' calls for diplomatic recognition. Unlike Russia, Washington refuses to back the Syrian Kurds’ demands to take part in the Geneva peace talks. Just as critically, Washington refuses to support the YPG’s long-running ambition to punch a corridor through the Manbij pocket, a 60-mile strip of territory IS still holds on the Turkish border.

The corridor would connect Kurdish-controlled areas east of the Euphrates River with the mainly Kurdish Afrin enclave to the river's west. Turkey has threatened to intervene militarily to stop the Syrian Kurds from doing so on the grounds that the YPG is no different from the Kurdistan Workers Party (PKK).

The PKK is on the State Department’s list of terrorist organizations, but the YPG is not. Washington seized on this loophole to deepen its partnership with the Syrian Kurds. That distinction has been wearing thin since last August, however, when a two-year cease-fire between the Turkish army and the PKK collapsed, together with peace talks between the Ankara government and PKK leader Abdullah Ocalan. The conflict has since been escalating, with hundreds of casualties on both sides. In February, the Kurdistan Freedom Falcons, a PKK-linked group, mounted two successive suicide bomb attacks, leaving scores of Turkish security personnel and civilians dead.

“Unless Turkey’s Kurdish problem is resolved, and without a distinct Syrian Kurdish leadership apart from the PKK, Syrian Kurdish autonomy will continue to be constrained,” predicted Denise Natali, a senior research fellow at the Institute for National Strategic Studies in comments to Al-Monitor. The YPG’s cozy ties with Russia haven’t helped either, Natali added.

In an effort to show support for Turkey in the face of PKK attacks, the United States has resumed support for Turkish-backed rebels in recent weeks, sending a clear signal to the YPG that it is no longer the only game in town. Despite sustained coalition aerial support, however, the Turkish-backed groups have failed to make a dent. IS wrested back much of the territory the rebels had captured in an offensive in early April. Not only that, the extremist group has stepped up cross-border attacks against Turkey, shelling Kilis, killing 18 civilians so far.

It is little wonder then that Washington, with the help of the YPG-led Syrian Democratic Forces (SDF), is pressing ahead with plans to capture the city of Manbij, thought to be the operational nerve center of IS.

The SDF was established last year in part to address Turkish fears of Kurdish hegemony along its borders. Although the YPG remains the dominant force, the SDF includes Arabs, Christians and Yazidis. The number of Arabs within the SDF is growing, which makes strategic sense, because only Arabs can hold Arab-majority population centers like Manbij and — more critically — Raqqa, the “capital” of IS’ self-declared caliphate. There is some speculation that newly arrived US Green Berets will train the SDF to become the “moderate rebel” force that Washington long dreamed of establishing in Syria but has failed to achieve.

Where does all this leave the YPG, which says it will take part in the battle to retake Raqqa only if the United States helps it link up the areas under its control? Much hinges on whether Turkey and the YPG’s PKK mentors find a way to settle their differences. The rhetoric emanating from both sides suggests neither is so inclined.