European parliamentarians and rights groups are calling for Turkey to end the detention of two students behind bars for three months for protesting the government-appointed rector of Bogazici University. 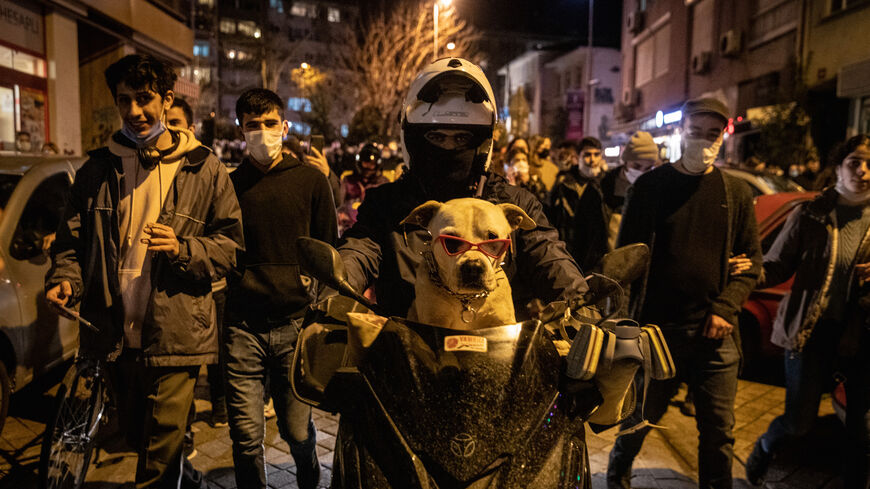 A protester rides a motorbike with his dog during a protest against the appointment of new Bogazici University rector Melih Bulu in the Kadikoy district on Feb. 2, 2021, in Istanbul, Turkey. - Chris McGrath/Getty Images

Members of the European Parliament and international and local human rights groups called on Turkey to release two university students who have been behind bars for more than three months for participating in protests against the government-appointed rector of one of Turkey’s top public universities.

The calls come as the protests at Bogazici University, where students and academics have been fighting against the reach of President Recep Tayyip Erdogan, mark their first anniversary. Since Jan. 3, 2021, the picturesque campus overlooking the Bosporus has been filled with security guards and iron barriers that have prevented access to the offices of the rector. Nearly a thousand students were detained and about a hundred lost their scholarships for participating in the protests. A dozen academics sympathetic to the student protests were removed from duty.

“We have been observing with great concern the arbitrary repression of the state security forces against the students of Bogazici University in Istanbul … protesting against the arbitrary appointment of the rector by President Erdogan,” four European Parliament members said in a joint statement this week, ahead of Friday’s trial of 14 students facing six to 32 years' imprisonment.

Claiming that the students had simply been using their constitutional rights, the lawmakers added, “They have been paying a very high price for exercising their fundamental right to protest and demonstrate for some time now: the students are being clubbed down, terrorized, arrested, and, in some cases, tortured.”

In a similar vein, a statement from 22 nongovernmental associations and rights groups, including Bogazici support and alumni groups, said the arrests were “arbitrary” and “used as a tool to suppress students' movement and to intimidate and scare students." They called on the courts to acquit the students.

Among the 14 students who will be standing before the court, two in particular have become symbols of Turkey’s heavy-handed treatment of the student protesters, who have been called “terrorists” by Erdogan and “venomous snakes” by his political ally, ultra-right leader Devlet Bahceli. Ersin Berke Gok, a senior in the physics department, and Caner Perit Ozen, a student of history, have been behind bars for 94 days, about half of it in solitary confinement. According to their lawyer Burcin Sahan, they have been denied access to medicine, their school exam papers and visits by friends.

“We are curiously waiting to see just what the prosecution would submit to the court on Gok and Ozen, because when we look at the videos of the events on Oct. 5, what we see is the security forces shoving the students, not the other way around,” Sahan said. “Though Ozen is detained for inflicting injuries on a security guard, there is no medical injury report. On the contrary, Ozen’s shoulder was injured and he suffered for 10 days without any medical treatment.”

The charges against Gok include hijacking an official vehicle. During a protest Oct. 5, the slim young man with huge eyes and disheveled hair jumped on the rector’s car, and shouted for academic freedoms and made a victory sign. Hours after the images went viral, Erdogan said, “Students who try and stop a rector’s car, those who disrespect their teachers, that is unacceptable. These cannot be students, but terrorists who have infiltrated our universities.”

Asked her expectations from the trial on Jan. 7, Sahan said, “Acquittal would be the right thing to do, but we think it is unlikely and that the case will drag on. So we would at least like to see the release of the two so they can continue with their lessons.”

“Nearly 1,000 students have been detained, some over and over, ever since we first started the protests,” Doruk Tunaoglu, a graduate student and a member of the Bogazici Watch group, told Al-Monitor.  “Many of the students who have participated in the demonstrations were deprived of their scholarships. We are trying to provide scholarships for them through the help of our alumni.”

The public university, the only Turkish institute to be listed among the top 200 international universities, has been a liberal bastion where the bright-but-poor kids of Anatolia rubbed elbows with the children of Turkey’s economic and cultural elites for generations. Its alumni and faculty have long been key personalities in the Turkish political and cultural scenes, including two of Turkey’s former prime ministers.

The university has a tradition of choosing its rector among its own academics through a peer vote, but the ruling Justice and Development Party has been undermining the practice since the mid-2010s. The final straw came on the last day of 2020, when Erdogan appointed Melih Bulu, a party man whose academic credentials were tarnished by allegations of plagiarism. Since then, the university has become a scene of demonstrations calling for academic autonomy and police suppression with gas and rubber bullets. Following months of protests on campus and around Turkey, the unpopular Bulu was removed from the post, only to be replaced by his iron-fisted deputy Naci Inci despite fervent protests from the Bogazici academia.

“Inci proved to be more repressive than Bulu,” Tunaoglu told Al-Monitor. “It is he who brought the specialized combat police to the campus and got them to shred our resistance tent to pieces.”

Inci has ended the contracts of various academics who have openly supported the students’ movements, including documentary maker Can Candan, and banned him from entering the school's grounds. He has also ended the contracts of the university’s coordinator on sexual harassment affairs and the editor of the university’s publishing house, making both bodies defunct. The LGBT club was shuttered.

“Just look at what is done in Bogazici and you’ll get a good idea how many institutions in Turkey are undermined or their autonomy is structurally destroyed,” said Seren Selvin Korkmaz, the executive director of IstanPol Institute, an Istanbul-based think tank. “It is similar to what is done to the Central Bank or the Turkish Statistical Institute. It has become a power game, a way of replacing merit with loyalty and extending control on institutions that should be autonomous.” 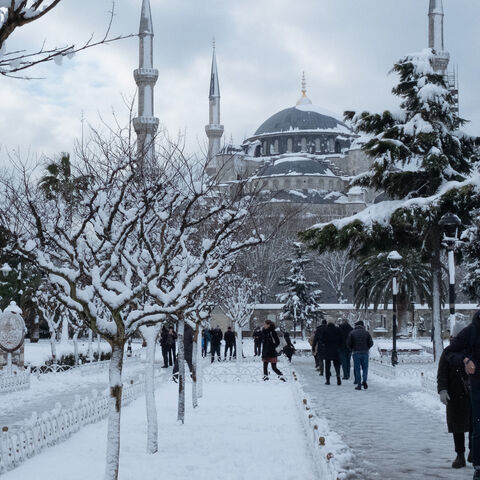