After cracking down on media, is Turkey going after academic freedom?

With a new regulation, Turkey’s private universities that are deemed as enemies of the state by the masters of the state may soon be confiscated by the state. 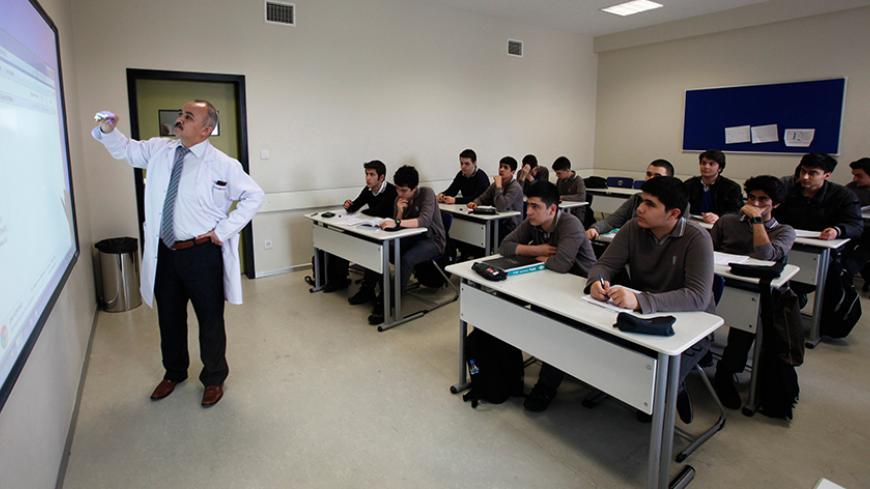 On Nov. 19, Turkey’s Official Gazette, where every new law gets published to become valid, published a bizarre amendment to the regulations of the Council of Higher Education (YOK). This government institution, established by the military after the 1980 coup, controls all Turkish universities, even private ones, as one of the icons of Turkey’s highly centralized and unabashedly overbearing state system. But now the YOK will have even more power, the Official Gazette announced, for it will have the authority to close down private universities if their administrators “execute or support activities against the state’s indivisible integrity.”

This means, in more practical terms, the private universities that are deemed as enemies of the state by the masters of the state may soon be confiscated by the state. The new regulation says such universities will not be closed down, but only taken over by the YOK, which will appoint new administrators and put it under an existing state university. It is a polite way of saying that they will be confiscated.

The regulation increases the authority of the YOK on every level, making every university liable to inspection by YOK at any moment. It also gives the YOK the authority to suspend certain programs in universities, suspend taking new students or close down the whole institution indefinitely. Some of the listed reasons for these punishments may be relatively objective criteria, such as cheating in exams, grades or student transfers. But other criteria seem just draconian, such as “not giving the YOK the necessary documents for inspection at the right time.” The most worrying part, the crime of “executing or supporting activities against the state's indivisible integrity,” is clearly a very vague clause that can easily be used to punish political dissidents.

Many people in Turkey think that this new draconian YOK regulation was planned by the government — or, more probably, by the Presidential Palace — with a specific target in mind: the universities that are affiliated with the Gulen movement, President Tayyip Erdogan’s biggest “enemy within.” Turkey has a total of 190 universities; 114 of them are public, 76 of them are private, which are called “foundation universities.” Of these foundation universities, 17 are affiliated with the Gulen movement, and thus they may soon be closed thanks to this new regulation, as a pro-government pundit zealously celebrated in his column.

Yet there is really nothing that can justify this new regulation. First of all, as for the Gulen movement, some of its members in the police and the judiciary are blamed (and not just by the government) for crimes such as illegal wiretappings and manipulation of evidence in politically charged cases. The prosecution of these allegations is legitimate. However, in the past two years, the government extrapolated from such controversies to depict the whole Gulen movement — which has schools, kindergartens, nongovernmental organizations and media — as the enemy of the state. The result has been nothing but a witch hunt — not the prosecution of real crimes, but the attempted destruction of a whole civil-society movement.

Moreover, there is nothing that guarantees that the scope of this new regulation will be limited to the alleged treachery of the Gulen movement. The pro-government media does not shy away from condemning all opposition circles (including independent media) as traitors to the nation and enemies of the state. Therefore, not just Gulen-related universities, but others whose political line may rattle the government may soon find themselves committing the crime of “executing or supporting activities against the state's indivisible integrity.” Meanwhile, most private universities, afraid of being taken over by the government, may simply fire their professors who displease the government with their critical views. Consequently, Turkey’s universities, just like its media, can be gradually sanitized from “treacherous” (i.e., non-pro-government) voices.

It should be also added that this confiscation business is already on in its way regarding the media and business. Just last month, the Gulen-linked Koza Ipek Holding, along with the two newspapers and two TV stations it owned, was confiscated by government-appointed “trustees.” Since then, critics have been speaking of the coming of a “confiscation regime,” where anti-government circles will be stripped of their property rights. Ironically, this sounds very similar to the early years of the Republic, the 1920s and ’30s, when the state confiscated the properties of “enemies within,” such as the foundations of non-Muslim minorities. The ruling Justice and Development Party (AKP), which has always been critical of that era and even proudly corrected some of its misdeeds, is now leaning toward a similar path.

In fact, in general, the AKP is rapidly returning back to the “Old Turkey” standards that it used to criticize and even condemn. The very strengthening of the YOK, which was severely criticized by pro-AKP voices in the early years of the 2000s as a bulwark against academic freedom, is a case in point. YOK was then opposed by the AKP because it was at the hands of the hardcore secularists who imposed their views, such as by banning the Islamic headscarf in the campus. But once the AKP took control of YOK after 2007, the problem was solved. The problem was not authoritarianism per se; it was merely the secularist content of authoritarianism.

Notably, an exceptionally liberal figure in the AKP, Nihat Ergun, who was a minister of science and technology for years but who is now sidelined, had warned his colleagues against this course back in 2008. In an intra-party discussion about the future of the YOK, Ergun supported then President Abdullah Gul’s call to decentralize universities, and said:

“YOK was founded in 1982, when we were students. Those who protested the YOK in those years [the leftists] became its ardent supporters once they took control of it. Then they began to tell us, ‘You cannot abolish the YOK.’ In my view, we should take steps in order to be not like those people who first opposed the YOK but then claimed it. … The institution should either be abolished or just turned into a mere coordination body.”

Sadly, the AKP indeed proved to be “like those people who first opposed the YOK but then claimed it.” Moreover, the AKP is now further strengthening the YOK’s iron fist with the mind-boggling powers to confiscate “harmful” universities. It is a sad lesson about Turkish democracy, which, for some curious reason, never takes lessons from the past.