How the AKP subdues Turkey's universities

The new dictum in Turkish universities is not “publish or perish,” as at US universities, but “be pro-AKP or perish.” 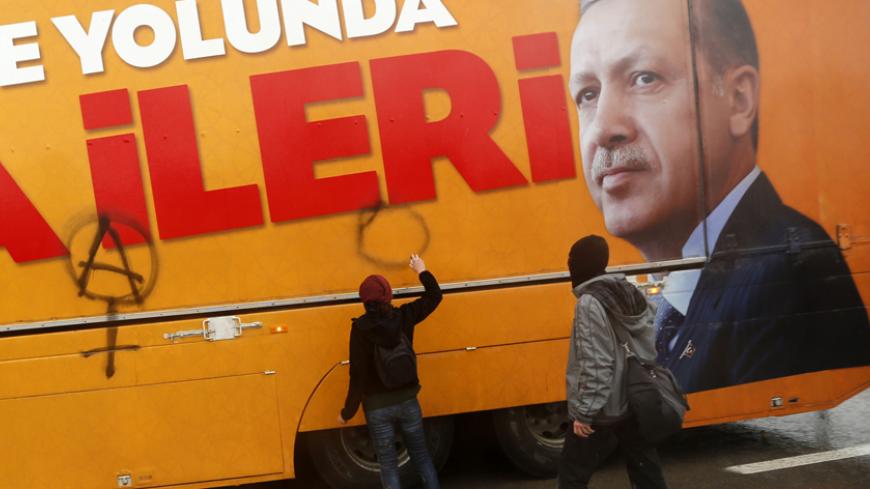 Protesters paint a truck of Turkey's ruling Justice and Development Party during a demonstration at the Middle East Technical University campus in Ankara, Feb. 25, 2014. - REUTERS/Umit Bektas

Until March, Sedat Laciner led Canakkale Onsekiz Mart University (COMU), one of Turkey’s largest state institutions of higher learning, with more than 35,000 students. Laciner, a professor of international relations with a doctorate from King’s College, London, is also a public figure, frequently writing op-eds and appearing on political TV talk shows. He once was sympathetic to the Justice and Development Party (AKP) government, but in the past two years had grown critical of President Recep Tayyip Erdogan’s authoritarianism. This led some pro-Erdogan commentators to suggest that Laciner might be a “parallel,” in other words affiliated with the much-despised Gulenist movement headed by Fethullah Gulen. Others noted that he had a photo of former President Abdullah Gul in his room, not one of Erdogan, allegedly making his politics suspicious.

Thus, the new rector of COMU was chosen by none other than Erdogan. Prior to the appointment, COMU scholars had held a mini-election in late February, giving Laciner the highest number of votes, 237 out of 670. Yet Erdogan, using his constitutional authority, shortly thereafter appointed a different professor, Yucel Acer, as rector, although Acer had received only 180 votes in the mini-election. After assuming office, Acer proudly declared to the pro-AKP press that he would initiate a "cleansing” of the “parallels" at the university.

Laciner soon realized that he had lost more than his rectorate. The computer in his office was confiscated by order of Acer. He was also transferred to a much smaller campus of the university 100 kilometers (62 miles) away. The new rector’s henchmen examined CCTV footage from cameras near Laciner's university-sponsored residence, looking for “crimes.” Not just Laciner but his entire former team came in for a share of the new administration’s wrath. They too will all soon be sent to remote districts. “It is kind of a witch hunt at COMU,” Laciner said to the press.

Notably, COMU is not the only focus of the hunt for the parallels. The pro-Erdogan media is busying itself with exposing “parallel academics” at other universities and calling for their dismissal. Gazi University, in Ankara, is a key target, with its rector, Suleyman Buyukberber, a medical doctor, accused of being one of the most nefarious parallels, packing the university with his comrades. Daily Sabah, one of the most vocal pro-Erdogan papers, has targeted Buyukberber in a series of sensational stories. On April 20, the paper featured the huge headline "Parallel rector in panic."

Objectively speaking, the Gulenist movement can indeed be accused of “cadre building,” as it is called in Turkey, at universities and other state institutions. Even before the current witch hunt, even objective journalists had reported such criticisms of the movement. The current witch hunt, however, is itself nothing more than another wave of cadre building. Now, all state institutions, including state universities, are being packed with AKP loyalists. Moreover, for ordinary people, the best way to prove that one is not a parallel is to wave the AKP flag.

The ideal, iconic rector in this brave new Turkey is perhaps Mansur Harmandar, who has headed Mugla Sitki Kocman University since 2010. In 2013, he briefly left his post to run for municipal elections as an AKP candidate. When he lost, he returned to the rector's chair at the same university. On April 20, he made news by leading the opening ceremony of the AKP election bureau in Mugla and hosting AKP members for a picnic at his campus. He left no doubt that the ruling party and his university were in the midst of a love affair.

The obvious problem with this entire scenario is its depriving Turkish universities of the fundamental requirements of academia — that is, objectivity, autonomy and freedom. It leaves no room for meritocracy, a system that Prime Minister Ahmet Davutoglu alludes to in his speeches, because the most important merit is being pro-AKP, not hard work, creativity or proficiency. The main dictum is not “publish or perish,” as at US universities, but “be pro-AKP or perish.”

To be fair, one should recall that pre-AKP Turkey was not much different. At that time, especially in the 1990s, the dominant ideology was not Erdoganism, but Ataturkism, and the best way to become a university rector was to be a dedicated Ataturkist. Such academics proved their merit by frequently visiting Ataturk’s mausoleum and launching witch hunts against the “enemies of Ataturk,” among them “religious reactionaries,” who were typically identified by their headscarf or having a wife who wore one.

The AKP, indeed, got rid of that “Old Turkey” and ushered in a new one. The novelty is not in the rules, however, but in the rulers. For a truly new and admirable Turkey to emerge, a much more meaningful transformation must take place. It needs to replace hierarchy with pluralism, the rule of the winners with the rule of law and a culture of domination with a culture of freedom.