Turkey Relieved Obama Did Not Use 'G' Word

Ankara is pleased, again, that US President Barack Obama did not use the word “genocide” on this Armenian Remembrance Day, writes Tulin Daloglu. 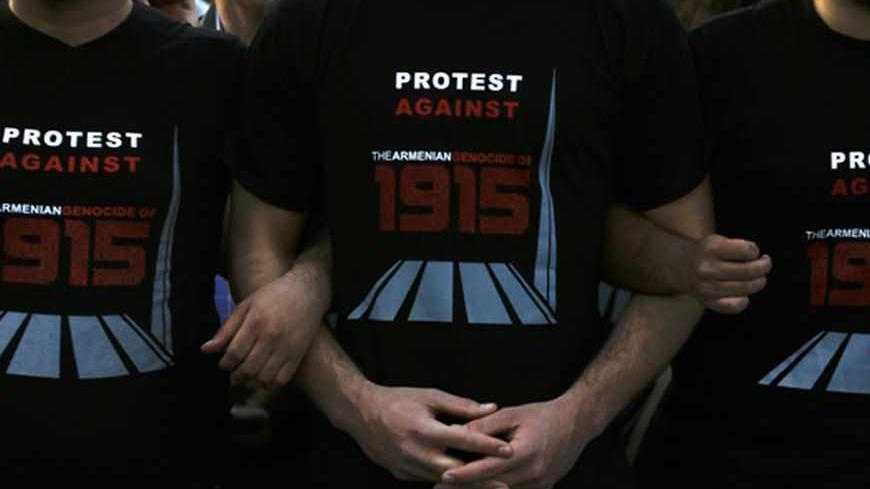 Armenian protesters shout slogans against Turkey during a demonstation near the Turkish embassy in central Athens, April 24, 2013.

“Today, we commemorate the Meds Yeghern and honor those who perished in one of the worst atrocities of the 20th century,” President Barack Obama said today [April 24]. “Ninety-eight years ago, 1.5 million Armenians were massacred or marched to their deaths in the final days of the Ottoman Empire.” He then went on to say: “I have consistently stated my own view of what occurred in 1915, and my view has not changed. A full, frank and just acknowledgement of the facts is in all of our interests. Nations grow stronger by acknowledging and reckoning with painful elements of the past, thereby building a foundation for a more just and tolerant future.”

The Turkish media has expressed relief that Obama once again ignored to use the word “genocide.” However, the Turkish Foreign Ministry released a written statement late evening [April 24] condemning Obama's remarks. "We find [President Obama's] statement [on Armenian Remembrance Day] troubling in all ways, and condemn it. These kinds of one-sided statements under the influence of domestic politics and with a selective sense of justice in interpreting a controversial historical event [like this one] not only harm Turkish-US relations, but also make it more difficult for Turks and Armenians to achieve consensus over a just memory," the Turkish Foreign Ministry said.

"We expect from an important ally such as the US not to further complicate this matter, but instead to encourage the Armenian side for a more realistic and negotiable scientific research and make constructive contributions to resolve this issue." In other words, neither Obama's remarks nor those on the Turkish side regarding Armenian Remembrance Day - since the president came to office - changed at all.

For at least the past three decades, since the White House decided to release a statement in recognition of the Armenian Remembrance Day, one of the main missions of the Turkish ambassadors and Turkey’s lobbying firms in the US capital have been to prevent the US president and Congress from uttering the word “genocide” on this day. The last time the House Committee on Foreign Affairs voted in favor of a resolution on the subject in March 2010, Turkey withdrew its ambassador from Washington. In 2006, when a similar resolution was discussed, Ankara even threatened the US administration that if they were to recognize what had happened to Armenians as “genocide,” they would end the US use of Incirlik air base, which served as a crucial supply line to the troops on the Iraqi battlefield. Whatever the US presidents' personal opinions on this issue have been, none have used the “g” word in their official capacity. Ronald Reagan used it once in 1981, but he refrained from citing it again while in office.

That aside, Turks have been fiercely engaged in controversial debates for the past decade on their historical record — including what happened to Armenians at the end of World War I. While there is a unique polyphony in society over this sensitive topic — and Turkish Prime Minister Recep Tayyip Erdogan’s government takes the credit for allowing Turks to extend their limits of “freedom of speech” like never before on such taboo issues — the ultimate question still remains the same: Will Turkey recognize the events of 1915 as “genocide”?

“Depending on the time and the conjecture, the prime minister says different things. One day he denies all possibilities that our forefathers could have done such a thing. At other times, he sounds different,” Ferda Balancar, a correspondent for the Turkish-Armenian weekly AGOS, and coordinator of the Oral History Project at the Hrant Dink Foundation, told Al-Monitor. “Although the official Turkish position is not yet getting closer to us in a pace we wish, there is nevertheless a change [for the better]. I’m more optimist for the near future …as the centennial nears by.”

Balancar explains that Erdogan’s government has taken a more critical look at the Young Turks era, or the single party period [1923-1952], which only helps society as a whole, including its minorities, to overcome the horrors of the past, and start healing. “It’s not only the government approach though,” Balancar said. “In the past decade, Hrant Dink [the editor in chief of AGOS] really worked hard to raise awareness about this issue and his assassination revoked a very sincere reaction by the people.”

“I may see myself as frightened as a pigeon, but I know that in this country people do not touch pigeons,” Dink wrote in his last column in January 2007, where people learnt that he had been receiving serious death threats for some time. He became the first Armenian-Turk to fall victim to a political murder. His assassination took Turks to the streets in massive numbers to support “freedom of speech” for the first time ever in the republic’s history. Since then, talking about the events of 1915 as being “genocide” is no taboo in this country.

And if Balancar proves to be right, and that the government recognizes at some time in the near future the events of 1915 as "genocide," two things will be certain: Americans will be relieved that this is no longer an issue in their bilateral ties with Turkey, and that Turkey won’t be spending millions of dollars to lobbying firms to defeat resolutions in Congress on this issue. If the Erdogan government, however, has no willingness to change the state policy on this controversial issue, it’s evident that it won’t get any easier to defeat potential upcoming resolutions, or to prevent Obama from uttering the word “genocide” in 2015.