Turkey’s Constitutional Court overturned a bill strengthening the powers of the minister of justice over the Supreme Council of Judges and Prosecutors. 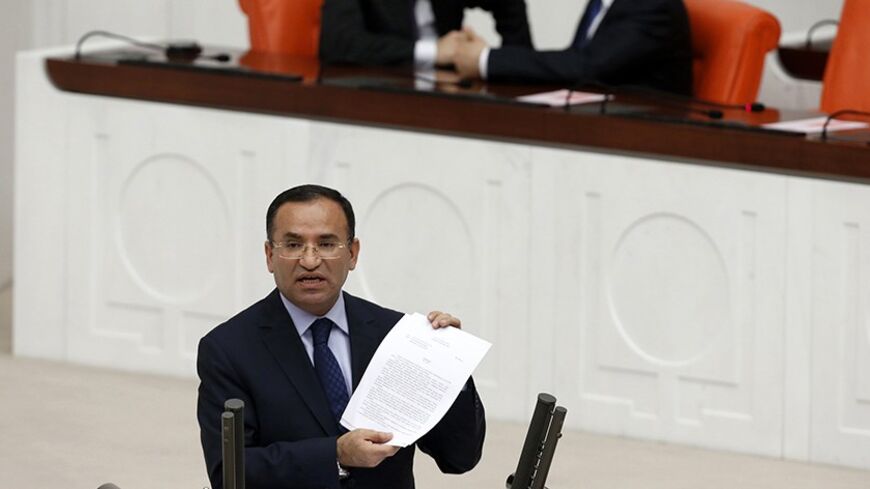 While signing into law the controversial bill on the Supreme Council of Judges and Prosecutors (HSYK) on Feb. 26, Turkish President Abdullah Gul said he found at least 15 articles in violation of the Turkish constitution and that he was assured that the ruling party would make the necessary adjustments at the Parliamentary Justice Commission to amend those violations.

Turkey’s main opposition Republican People’s Party (CHP), however, did not agree and filed suit at the Constitutional Court on March 2 for this law’s annulment. The court decided on April 11 that the new articles in this law that bolster the control of the minister of justice over the HSYK are actually unconstitutional because they attempt to overrule the independence of the judiciary with respect to the executive.

Turkey’s Justice Minister Bekir Bozdag said in his first reaction to this top court’s decision that it is “unacceptable” and that he does not understand what it is that the court found “unconstitutional.” While Bozdag also cast doubt over the timing of the decision, hinting that it could be politically motivated, it is also a fact that the ruling party proposed this change into law only after the Dec. 17 graft probe, which brought the country’s strong prime minister into a power struggle with the followers of a US-based Sunni cleric Fethullah Gulen, who are well-established in key state institutions like the judiciary and law enforcement.

The graft investigation is widely perceived as the end of the alliance between the Gulenists and the ruling Islamist-based Justice and Development Party (AKP). In fact, it has been the AKP government for over a decade that provided full support to the Gulenists to strengthen in number and high-level occupations in these key state institutions. Now, however, Turkey’s Prime Minister Recep Tayyip Erdogan has gone so far as to depict the Gulenists as a “terror organization” and vowed to purge them from state institutions, announcing an all-out war against the “parallel state” formed by the Gulenists.

On May 7, 2010, the Erdogan government, with its majority in the parliament, approved a bill to reform the country’s constitution. The pillars of these reforms call for overhauling the Constitutional Court — the ultimate guardian of Turkey's secular constitution — and the restructuring of the HSYK, responsible for managing the judiciary. Since the number of parliamentary votes was not enough to enact this bill, the AKP government took it to a referendum on Sept. 12, 2010, with the slogan, “It’s not enough, but yes!”

Since he was elected to power over a decade ago, Erdogan has not suffered a defeat at the polls, and this time, too, he won an easy approval from the people. But back then, Erdogan and the Gulenists were in a cozy relationship of convenience. Today is clearly a different story, though.

The annulled law gave the justice minister unprecedented control of the HSYK. Take for example the authority given to the justice minister as the head of the HSYK to have direct control over all three chambers of the board and to initiate an investigation against HSYK members. This would have clearly opened the door for the ruling party to threaten those judges and prosecutors who act against the ruling party’s will with investigations. Clearly, no one could operate well under such intimidation.

It is key to look closely into the AKP’s actions rather than its words of goodwill. Since the graft probe surfaced, for example, the government has reassigned hundreds of judges and prosecutors, as well as thousands of police officers who were involved in this investigation. The opposition parties consider this an attempt to cover up the corruption and bribery investigation in the absence of clear evidence as to what law these people violated.

Last but not the least, the tweet that the AKP’s Ankara deputy Zelkif Kazdal sent out on April 11 attracted lot of attention as he suggested proposing a bill making changes to the Constitutional Court’s powers. “For the sake of the national will, it has become clear that we should overturn by law the authority of the Constitutional Court on annulment,” he wrote. While Erdogan has clearly proved that he can get the support of the people at the polls to make any changes to the law or whatever, the country’s top judicial institution nevertheless stood firm, giving a message that he can do so if those changes are compatible with the rule of law and the principle of separation of powers as it should be in a democracy.

Bozdag, however, acts as if he wants to depict the court as the new opposition party by casting doubt over the legality of this top court’s reasoning against the AKP in one case after another. The court decided unanimously on April 2 that the government must immediately end the ban on access to the social media site Twitter. Erdogan also publicly shouted out that he disrespects the court's decision, and that was perceived as an attempt of the government’s public machine to hurt the court’s credibility. Interestingly enough, the court opened a Twitter account today, @AYMBASKANLIGI, as it delivered its decision on the HSYK.

Still, the question remains whether the AKP could change the constitution in a way to reshape the authority of the Constitutional Court. Since the country's next election season — for president — is in August, and the national vote is scheduled for summer 2015, it looks quite unlikely that Kazdal’s suggestion hinting at such constitutional revision would go anywhere beyond populist and opportunist consumption. However, an AKP strengthened by the upcoming polls and a likely Erdogan presidency can introduce unprecedented changes into Turkish jurisprudence.