A Turkish prosecutor filed a criminal complaint against Kemal Kilicdaroglu, chairman of the Republican People’s Party and anti-corruption crusader, potentially expanding a crackdown that has already targeted other members of the parliamentary opposition. 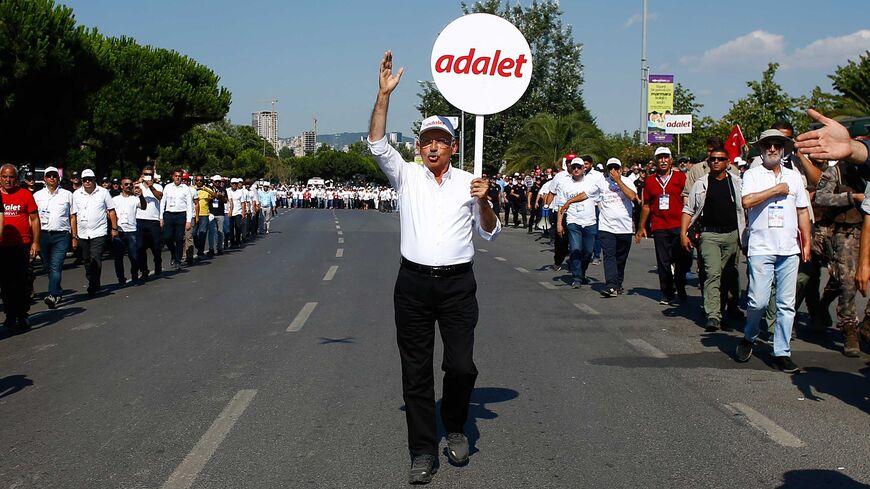 A Turkish prosecutor this week demanded parliament strip opposition leader Kemal Kilicdaroglu of immunity from prosecution for comments he made about a controversial constitutional referendum, raising the specter that the government’s broad crackdown could now extend to its main political challenger.

It is not the first prosecutor complaint against Kilicdaroglu, chairman of the Republican People’s Party (CHP), parliament’s second-biggest grouping. This one, however, coincides with heightened political tensions in recent weeks, sparked by Kilicdaroglu’s dogged allegations of financial impropriety against the government.

According to media reports, the prosecutor’s office said in a statement released Wednesday that it had submitted a legal file to parliament concerning Kilicdaroglu's criticism of the state election board’s decision to count non-validated ballots during an April referendum that expanded presidential powers. The prosecutor also submitted complaints on unrelated matters against two other CHP lawmakers, including the outspoken Sezgin Tanrikulu, and two members of the Peoples’ Democratic Party (HDP).

“These motions are an attempt to engineer politics with the hand of the judiciary, which the government controls,” said Tanrikulu, who faces at least six separate prosecutor complaints. “The files are not based on a crime or an insult, but solely on our political criticism.” The latest complaint is for comments he made about civilian deaths caused by unmanned aerial vehicles.

“Investigations have been opened against almost all members of our party caucus,” Tanrikulu told Al-Monitor. “Things we thought could never happen have happened under this government, so it is very hard for me to predict what will occur now.”

Parliament scrapped prosecutorial immunity for its members in 2016, allowing the assembly to vote to give a prosecutor the authority to pursue a case against a member. The measure, which some CHP lawmakers backed, had initially targeted the pro-Kurdish HDP, which has seen its two joint leaders and seven other lawmakers jailed on terrorism-related charges.

Prosecuting the head of a party established nearly a century ago by the founder of the modern secular republic, Mustafa Kemal Ataturk, would be unprecedented. Some observers believe it unlikely, in part because it could backfire on President Recep Tayyip Erdogan’s ruling Justice and Development Party (AKP).

“I don't think that there's any question that jailing Kilicdaroglu would be a bad move for Erdogan,” said Howard Eissenstat, a Turkey researcher at St. Lawrence University and a senior nonresident fellow at the Washington-based Project on Middle East Democracy.

He told Al-Monitor, “The CHP serves a useful function for the AKP. It gives the party a clear domestic foil, and it preserves the appearance of a competitive democracy. In that sense, the CHP leadership would be much more dangerous to the AKP in prison than it is in parliament.”

Still, a litany of graft charges that have emerged in recent weeks appears to have unsettled members of the AKP, who may worry that the charges could deter voters if a general election is moved forward to next year. Tensions between the CHP and AKP boiled over in the legislature this week, with fistfights erupting between lawmakers.

The 68-year-old Kilicdaorglu, who rose to national prominence a decade ago as an anti-corruption campaigner, late last month revealed documents that he claimed proved Erdogan’s family had sent millions of dollars to an offshore company. He did not accuse Erdogan or his family members of criminal wrongdoing, but implied tax avoidance.

Erdogan said Kilicdaroglu would “pay a price” for what he described as lies and filed a lawsuit demanding 1.5 million Turkish lira ($386,000) in damages. Prosecutors cast doubt on the authenticity of the documents Kilicdaroglu presented. When parliament dismissed a CHP motion to probe the allegations, the party, in a curious twist, filed another motion, requesting that Kilicdaroglu and his family’s finances be investigated “to serve as an example for all political party leaders.”

Pressure on the CHP has also taken other forms. The Interior Ministry forced out a CHP mayor on corruption charges, which Kilicdaroglu described as an act of intimidation. Then, Interior Minister Suleyman Soylu himself took aim at Kilicdaroglu, accusing him of threatening a pro-government television channel.

“Kilicdaroglu, your mind is rotten and your rope is about to break. I’m saying this very clearly, you are finished,” Soylu said at a provincial AKP meeting Dec. 10.

Undeterred, Kilicdaroglu this week called on the government to reopen an older corruption case against public officials after an Iranian-Turkish gold trader, Reza Zarrab, testified in a New York court that he had bribed AKP ministers and state bank officials to bypass US sanctions imposed on Iran for its nuclear program.

The opposition’s claims of corruption and authoritarianism have done little to dent support for Erdogan, who has ruled Turkey for almost 15 years and last year thwarted a military coup. The CHP, which draws its support from secular-minded and progressive Turks, has been unable to increase its share of the vote above 30%.

Kilicdaroglu did briefly galvanize a fractured opposition over the summer, when he undertook a 260-mile “Justice March,” from Ankara to Istanbul, to protest the jailing of tens of thousands of Turks, including journalists, politicians and academics, in the post-coup clampdown.

Kilicdaroglu has failed to sustain that momentum, however, and other opposition factions, including those disappointed with the lack of a more robust response from him over the imprisonment of HDP lawmakers, may not now rally to his defense.

“The CHP is clearly at risk of being hanged on scaffolding that it helped build,” Eissenstat said, referring to the party’s partial backing of the immunity measure last year. “I think Kilicdaroglu knew at the time that his party might be targeted eventually, but feared the opposition was already dying by 10,000 cuts.”