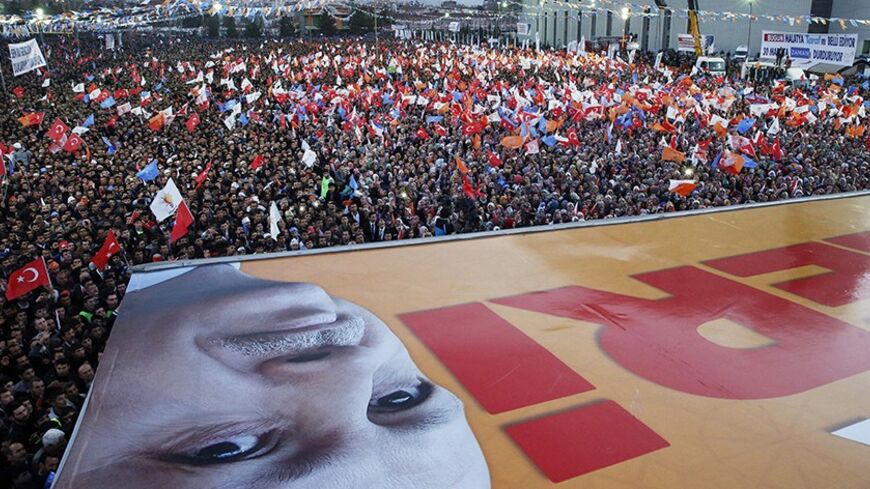 Almost every evening since Dec. 17, Turks have been listening to audio recordings leaked on YouTube, starring Prime Minister Recep Tayyip Erdogan, as they are gripped by awe, horror and shock as if watching a thriller series.

This aspect of the war between the Justice and Development Party (AKP) and the Gulen community has left us in shame over the state the country has plunged into.

One evening we listen to Erdogan instructing his son, Bilal, to remove huge stashes of cash from family homes. Another evening, we hear him working behind the scene to cancel a defense tender awarded to Koc, the business empire that drew his ire during the Gezi revolt for sheltering protesters in its hotel — that is, we hear the prime minister committing the crime of tenderrigging.

In several consecutive leaks — now widely called the “Hello, Fatih!” series — the prime minister phones a top media executive by the name of Fatih, telling him to censor a broadcast, black out the local election campaign of a leading candidate and fire a talk-show host. Yet another recording reveals he is unhappy with the $10 million amount that a businessman wants to send him through his son, Bilal.

Ironically, a prime minister who has had so many embarrassing or critical conversations wiretapped is trying to turn Turkey into an Orwellian country. Last month, Erdogan passed new restrictions on the Internet through parliament, and after the March 30 local polls, he is planning to pass a law that would give the National Intelligence Organization (MIT) sweeping powers of surveillance, wiretapping and information-gathering over the populace. But the prime minister himself seems to have lived unsuspectingly in a “Big Brother” house, an embarrassing revelation that further discredits the government and the state.

Some of the recordings were obtained legally. The court orders targeted not Erdogan, but people around him. So, when he spoke to those people, he too was wiretapped. Other conversations were illegally wiretapped. Yet, they are so outrageous in exposing how Erdogan flouts the norms of democracy, transparency, good governance, press freedom and the rule of law that their illegality fades to negligible significance in comparison.

The tape posted on YouTube on March 3 was the undisputed number-one hit of the week. Wiretapped illegally in early July 2013, it contains Erdogan’s conversations with then-Justice Minister Sadullah Ergin, in which he seeks to make sure that Turkey’s media giant, Dogan, receives a heavy sentence in an ongoing court case. Dogan remains Turkey’s largest independent media group, even though it was forced to contract under government pressure, with Erdogan known to be bent on destroying the group.

In the first call, Erdogan makes the following remarks: “We’ve spoken about a case, the Aydin Dogan case … I guess there is a hearing tomorrow at the lower court … You need to follow things up. The hearing may be held on Tuesday as well … Follow it closely to make sure it’s not neglected.” The justice minister answers: “Understood, sir. We’ve been already following it.” Erdogan then says: “Apparently, there will be a very heavy thing for them … That’s why it’s important.” Ergin answers again, “Understood.”

What Erdogan means by “a very heavy thing” is obvious: He wants a very heavy sentence for the Dogan group. The court case in question pertains to Dogan’s purchases of low-tax paper via off-shore companies in the late 1990s. According to sources close to the group, Dogan was acquitted five times in the case, but each time, upper courts overturned the ruling. Erdogan’s second conversation with the justice minister comes right after the sixth acquittal.

What Erdogan tells the minister in short is this: “Look, the case was heard. The man issued the ruling … He insisted on the earlier ruling. He acquitted them all.” The minister’s response reveals a highly problematic mindset: “There was information the judge is an Alevi.”

We need to open a parenthesis here. The Alevis are estimated to make up 10 to 15% of Turkey’s population. The Sunni doctrine of the ruling Islamists regards Alevism as a heterodox sect. The Alevis complain vocally of being ostracized and subjected to discrimination under AKP rule. The fact that the minister links the acquittal to the Alevi faith of the presiding judge indicates that the judge has been investigated and profiled. It is a dramatic example exposing how far discrimination has gone.

Moreover, the justice minister points directly to the judge’s sect to explain the acquittal rather than bringing up any legal argument, a reaction suggesting that justice has become a political instrument in Turkey. According to this logic, the Dogan group would have received the heaviest possible sentence, just as Erdogan wished, had the judge been a Sunni.

Now, let’s go back to the recording. Erdogan asks where the case will go next, and Ergin replies it’s the Appeals Court’s General Penal Assembly. And here is how the conversation continues:

Erdogan: What will happen at the General Penal Assembly?

Ergin: There won’t be much problem there. Things may turn out like this with an individual judge [the Alevi judge], but the General Assembly is a crowded body. It won’t work out there, sir … I will talk to the head of the General Penal Assembly on Monday or Tuesday before or after the cabinet meeting. We’ll make sure they pay the necessary attention.

The minister’s remarks suggest he intends to personally interfere with the upper court and tell them how to proceed — conduct that constitutes a vagrant violation of the constitutional provision on judicial independence and hence a constitutional crime.

The Dogan group reacted with a statement: “In the recording, which we do not want to believe is authentic, the prime minister speaks to the former justice minister about a judicial process involving Dogan Holding Honorary President Aydin Dogan, which repeatedly ended in dismissals of proceedings or acquittals. Such a conversation amounts to a clear interference in the judicial process … The independence of the judiciary is the fundamental of a democratic regime based on the rule of law. If genuine, this conversation will further shake the Turkish judicial system beyond creating an individual grievance … We expect immediate proof that this conversation did not take place and is not genuine.”

But what happened next was exactly the opposite of what Dogan expected. On March 5, Erdogan confirmed and defended the conversations: “What could be more natural than that? … We surely know what schemes were under way … Dirty affairs. Inevitably, I had to tell him [the minister] to closely follow the issue. I had to ask this in the name of my country and nation.”

Erdogan has dismissed as “montage” and “dubbing” the five calls he had with his son Bilal on Dec. 17-18, in which he asked Bilal to remove the money he kept at home. Certainly, one should not expect Erdogan to categorically deny as “montage” all the recordings that keep hitting the Internet.

By presenting his interference as an ordinary and natural move, Erdogan is trying to eradicate the perception of a constitutional crime. His intention is to reduce judicial interference to a commonplace occurrence.