Neither the ballot box nor a harsher regime seem to be able to rescue Turkish Prime Minister Recep Tayyip Erdogan from his current political troubles. 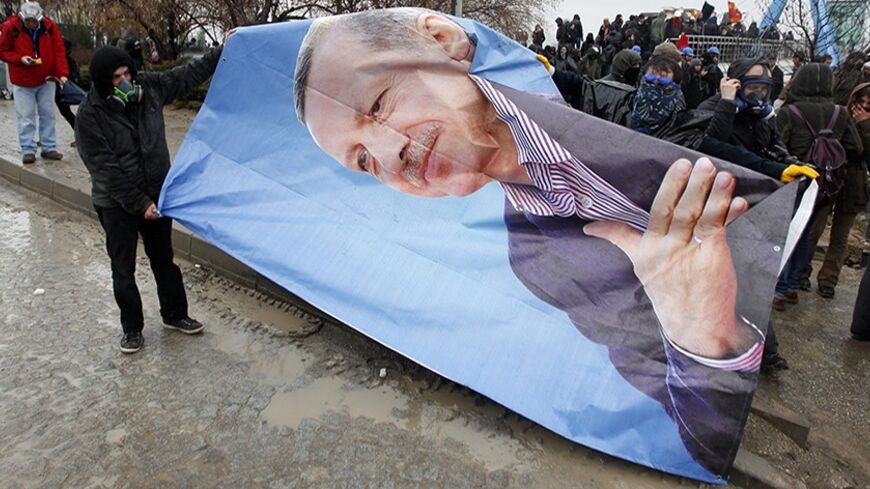 Protesters seize a portrait of Turkey's Prime Minister Recep Tayyip Erdogan during a demonstration against the opening of a new road that goes through a part of the Middle East Technical University campus in Ankara, Feb. 25, 2014. - REUTERS/Umit Bektas

Though Dec. 17, 2013, will go down in history as the day that a "grand corruption and bribery operation" targeting the government was launched, it was also the day that the conflict between the Justice and Development Party (AKP) and the Gulen movement, a US-based faith organization, became an all-out war. In the 2½ months since, the damage inflicted on the AKP and its leader, Prime Minister Recep Tayyip Erdogan, can be simply summarized: loss of legitimacy. Had Erdogan and his government not blocked the investigating prosecutors — in breach of the constitution — the legitimate battlefield for the comprehensive accumulation of corruption and bribery files would have been the judicial process. Yet, since the government has barricaded the route to the judicial proceedings, evidentiary material based on voice recordings — which should have been cited in indictments — is being revealed through social media.

The turning point in this all-out war was the Feb. 24 appearance on YouTube of five separate telephone conversations from Dec. 17-18, purported to be between Erdogan and his son Bilal. These five conversations addressed the urgent transfer of huge amounts of money, which Bilal stored in his residence, from illegitimate sources. From the son’s words, we understand that the money belonged to his father. The amount of money in question is very large, with Bilal telling his father that he couldn’t find a place to stash 30 million euros. In the end, father and son agree to use the money to buy real estate. Erdogan claims that these recordings are fake, consisting of montages and dubbings.

Two days after the recordings were revealed, another recording surfaced of a conversation between Erdogan and his son, regarding the latter receiving $10 million in cash from a businessman. In the recording, the prime minister sounds displeased with the money offered, saying of the businessman, “He will sit on our lap.”

The "legal reactions" of the government to these allegations have created further questions of legitimacy. For example, with regard to the bill that restricts Internet freedoms on the grounds of "protecting private lives and personal rights," it is obvious that this law was enacted to prevent access to incriminating audio and visual recordings. But while doing that, the executive branch is given the power to arbitrarily ban access to the Internet.

Another example is the law reorganizing the Supreme Board of Judges and Prosecutors (HSYK), the country's highest bureaucratic body that determines judiciary assignments. The HSYK law, just like the Internet law, is part of the war against the Gulen movement, aimed at annihilating the power and influence of Gulenists, first in the HSYK, and then in the entire judiciary. But this new arrangement — which allots the HSYK's authority to the minister of justice — places the judiciary under the sovereignty of the executive branch, and as such delivers a fatal blow to democracy’s vital "separation of powers" feature.

All these legal arrangements point to worrying perils facing the sustainability of democracy, specifically by giving legal cover to the extraordinary war that the government is waging against its former partner, and thus moving toward an even tighter authoritarianism.

Four important government ministers were compelled to resign after the Dec. 17 operation because of bribery and corruption allegations based on solid evidence. Erdogan has no intention of resigning like his ministers and seeking an acquittal in court. To the contrary, he charges the Gulen movement, which he calls "the parallel state," of plotting to stage a coup against his rule, and he portrays himself as a "victim of a coup attempt."

It is, of course, very clear that the Gulenists are trying to force the prime minister to resign.

These political realities, however, do not erase the corruption and bribery phenomena, which are backed by strong findings. Some questions will be answered in the coming days: How can Erdogan continue to govern his country amid an environment of a frightening legitimacy crisis, of which he and his family are in the center? How can Turkey continue to survive in this toxic atmosphere that enfeebles the people and the state, and plants the seeds of strife?

Think of a country where the opposition leader calls the prime minister "the prime thief," and where some opposition members unfurl banners at AKP rallies stating, "Watch out, there is a thief," at the risk of getting beaten up or detained. Anyone who shouts "shoe box" at a public rally — in reference to where the CEO of a state-owned bank stashed $4.5 million in his home — is detained by police.

Another question comes to mind: Does the prime minister have a valid strategy to exit from this crisis of legitimacy? What we see now is the prime minister’s efforts to turn the March 30 local elections into a referendum to acquit him at the ballot box. Nowadays, in his speeches, he challenges the opposition, “We will settle this at the ballot box.”

Senior AKP officials have already lowered their expectations; gone is any thought of reaching the success ratio of 50% plus one vote that referendums require. For the party officials, if the AKP obtains more than the 38.8% of the votes it received in the 2009 local elections, then it will be a success.

There is a point that should not be overlooked. In democracies, the ballot box is not a laundromat for the government to wash its dirty linen. Votes can neither convict nor acquit officials against allegations of theft, corruption and bribery. In a culture of legality and democracy, it is accepted that officials facing such charges would be found guilty or not guilty in independent courts.

No matter how many votes Erdogan and his party receive in the local elections, they won’t restore the AKP government’s lost legitimacy. Any local election result that the government can boast of as a success, can only be interpreted as voters consenting to corruption. This is something that will have to be looked into by sociologists and political scientists.

Erdogan is seen as planning to justify his intentions, which are to make his regime even more oppressive, should he end up with a vote percentage that he can declare a "success." It appears that Erdogan has opted for an "oppressive regime" as the exit path to overcome his legitimacy crisis. A discussion of a draft bill, which was to give extraordinary powers and immunity to intelligence organizations, was deferred until after the local elections.

An oppressive regime is not the solution for Erdogan and his party. If they take this route, the AKP may suffer considerable losses from their loyal constituency. It will then be impossible for the AKP to move forward with the formula "AKP without Erdogan." It would be impossible for Erdogan and his party to obtain their constituency's support for an oppressive regime. Why? Erdogan’s popularity with his conservative constituency rests on two pillars: the “conservative Sunni” political-cultural identity that he identifies with and offers to his constituency, and the relatively big share the low-income conservative base obtains from economic growth and prosperity.

If Turkey heads toward a more authoritarian and oppressive regime under Erdogan's rule, then that pillar of prosperity will be damaged. Economic growth will be even lower, and the government will be unable to provide prosperity. Erdogan will begin to lose the support of his base. He will not be able to stand on a single pillar, and will, in the end, leave.

Let’s explain: Turkey, whose economy constantly produces a deficit due to structural reasons, had no choice but to rely on a growth model based on financing the current deficit. Turkey, which for a time created a reliable economy with its EU membership hopes and reforms, was successful with this model and achieved growth. To sustain its growth, Turkey has to finance its current deficit through international financial markets or direct foreign investment. To this end, it has no option but to have a regime based on supremacy of law and respect for human rights and basic freedoms. A Turkey that chooses the path to isolate itself from the world, and to be arbitrarily governed by an authoritarian regime, will not get the foreign investments and money it needs. Then, there will be no growth and the country will become poorer.

Turkey is bereft of any crucial instrument that could provide immunity against the international system, as some authoritarian regimes have. For example, Turkey has no gas and oil. Turkey is not a rentier state; it has to keep producing and integrate with the world. It can’t survive otherwise.

Erdogan, who is avoiding dealing with the corruption charges, cannot preserve his government on the dead-end street he has entered.