Turkish Prime Minister Recep Tayyip Erdogan and his supporters are denying that recordings of conversations between the prime minister and his son are authentic. 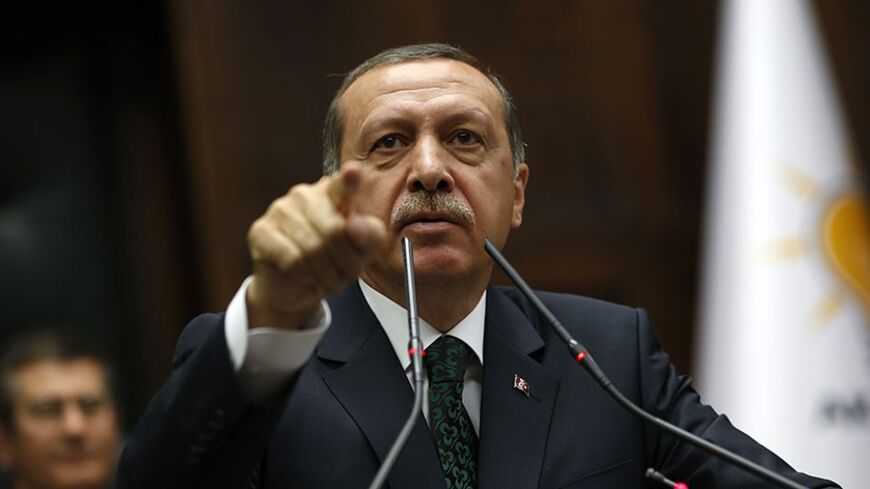 After the evening of Feb. 24, Turkey will never be the same. Around 9:00 p.m., recordings of five telephone conversations appeared on YouTube alleged to be between Prime Minister Recep Tayyip Erdogan and his son, Bilal Erdogan. The conversations are said to have taken place Dec. 17 and 18. Was this the anticipated big bang expected to change the course of political developments in Turkey? Is there more to come?

We will have a wait a bit longer for the answer, but what is beyond question is that this is the most serious and damaging blow to Erdogan since the government corruption investigations became public in December. Whether it is a lethal blow remains to be seen. It might, however, have inflicted a fatal wound to the man who until recently was a larger-than-life Turkish political leader and an international statesman whose grip on power was presumably secure and would remain so for years to come, perhaps until the centennial of the Republic of Turkey, in 2023. Not anymore.

Erdogan's credibility, already shaken by the graft probe, has reached such a low point that his chances of survival are increasinly slim. No one is certain whether he will survive politically through 2014. Even if he does, he will not be the formidable and uncontested leader that he was until just recently.

In the alleged tapes of the Erdogan’s telephone conversations, it sounds as though the prime minister has asked his son to remove $1 billion from the homes of family members and conceal it. When news of the recordings broke, the senior leaders in the opposition parties — the center-left Republican Peoples Party (CHP) and nationalist-right Nationalist Movement Party (MHP) — held emergency meetings and declared the end of the legitimacy of Erdogan and his government.

Around the same time, Erdogan met with the undersecretary of the National Intelligence Organization and the interior minister. They issued a brief official statement asserting that the YouTube tapes had been faked.

The next day, Kemal Kilicdaroglu, leader of the main opposition CHP, addressed his party members in the parliament building and played the tape in its entirety on a giant TV screen behind the rostrum. Some TV channels, afraid of Erdogan’s reaction, immediately halted live transmission of the CHP meeting, but four channels aired the full conversation between the prime minister and his son.

The tapes broke YouTube view count records in Turkey. Before the day was over, two million people had listened to the alleged discussion on how to hide a billion dollars. The affair ballooned. The tapes were played on ferry boats across the Bosphorus and at the exits of several metro stations.

Demonstrations resembling those recently witnessed in Ukraine were staged in many cities, most notably in Istanbul. Clashes erupted between the police and citizens in Kadikoy, the center of Istanbul’s Asian side. The pepper-gas scenes were reminiscent of those from 2013 in Taksim, the center of the city’s European side.

A statement by Kilicdaroglu referring to Erdogan as a thief is one indicator of how intense the situation has become. Kilicdaroglu said, “A thief cannot occupy the prime minister’s chair” and that he no longer recognizes Erdogan as Turkey's leader.

The opposition MHP called on the judiciary to take action. Selahattin Demirtas, the chair of the Kurdish Peace and Democracy Party, said there is nothing left to discuss with a “prime minister under suspicion.” This was particularly important, signaling that Erdogan may no longer has a Kurdish lifeline to hold on to.

Some excerpts of the alleged conversation between father and son are quite telling. There are five of them circulating on YouTube. The first one is date stamped 8:02 a.m., Dec. 17. Erdogan, in Ankara, informs his sleepy son in Istanbul about the graft probe that had just gotten under way and asks him to hide a huge amount of money. Here are a few excerpts:

Erdogan:  Are you home, son?
Bilal:  Yes, father.
Erdogan:  Now! This morning [they] made an operation. [Businessman] Ali Agaoglu, [Iranian businessman] Reza Zerrab, [former minister] Erdogan [Bayraktar]'s son, [former minister] Zafer [Caglayan]'s son, [parliament member] Muammer [Guler]'s son, etc. … All their houses are being searched now.
Bilal:  Say again, father.
Erdogan:  I'm saying that Muammer's son, Zafer's son, Erdogan's son, Ali Agaoglu, Reza Zerrab, etc. — they are searching the houses of 18 people under a big corruption operation thing.
Bilal:  Yes.
Erdogan:  OK? Now, what I say is, you must move out everything that you have in the house. OK?
Bilal:  Dad, could that be done? There is your money in the safe.
Erdogan:  That's what I mean.

Bilal:  What should we do with these, daddy, where should we put them?

Erdogan instructs his son to cooperate with other family members in removing the money. They speak again the same day, and Bilal tells his father he is waiting for darkness to move the money out of his house. He assures the prime minister:

The fourth and the last conversation of Dec. 17 between the two is stamped 11:15 p.m.

Bilal:  Hi daddy, I am calling to … we did [it], mostly. Eee, did you call me, daddy?
Erdogan:  No, I did not. You called me.
Bilal:  I was called from a secret number.
Erdogan:  By saying 'mostly' … did you fully get rid of it?
Bilal:  We did not get it down zero yet, daddy. Let me explain. We still have 30 million euros that we could not yet conceal …

Bilal complains of the difficulty of transferring such a large amount of money. He says, “We were able to hide this much for now. It is already hard. It takes too much space. We are putting some of it in another place.”

The full conversation can be heard on LiveLeak, where transcripts in Turkish and English are also posted.

Erdogan and his supporters are passionately and desperately claiming that the tapes are fabricated. The report says that the phone conversations between the prime minister and his son took place via encrypted lines, which means either the encryption was broken or the prime minister was taped by the telephone service provider.

In Turksh we have a proverb that goes, “You can chose the way you want to die.” That is where Erdogan is: If the tape is authentic, contrary to his claims — and it looks that way — it would mean he has committed a crime that would require a trial before the Supreme Court. On the other hand, if his converations were manipulated to create the tapes, how can someone who cannot even control his encrypted phones govern a country like Turkey for another 10 years?

With this, it seems Erdogan is finished. There will be a gap between his being finished and his eventual departure, but at the moment, that gap is where he is.