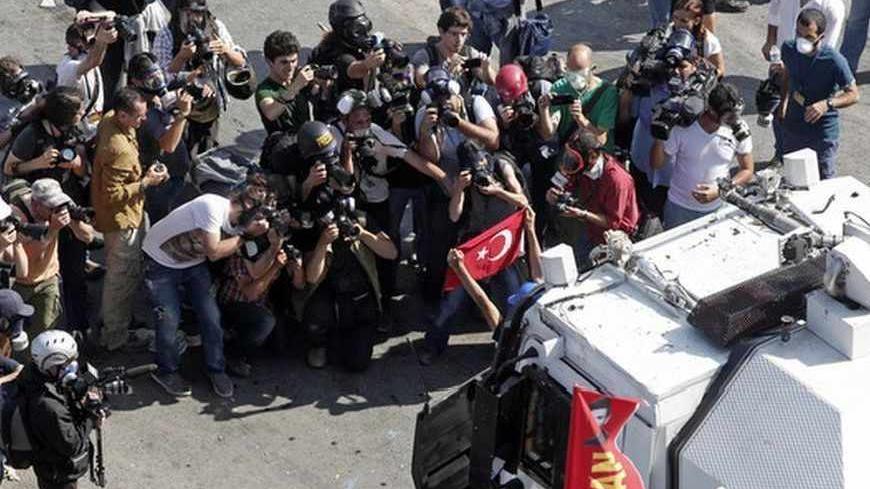 Photographers take pictures of a protester holding a flag in front of a riot police vehicle during a protest at Taksim Square in Istanbul, June 11, 2013. - REUTERS/Osman Orsal

Did you know that CNN anchor Christiane Amanpour would be arrested if she set foot on Turkish soil? For the first time in Turkey, a newspaper editor has made an official complaint about a foreign media correspondent. The editor’s complaint states, “Ms. Amanpour has abused the powers of CNN while reporting about the Gezi protests. She caused loss of life and property by disseminating false news and provoking people.” As the Gezi protests and their aftershocks stretch to fill a month's time, we must ask: What is the Turkish government’s biggest loss?

After days of on-location observing, I have come to the conclusion that Turkish Prime Minister Recep Tayyip Erdogan’s biggest loss is the erosion of the Justice and Development Party (AKP)’s intellectual support base. This loss curtails Erdogan’s ability to control Turkish public opinion significantly because the average Turk has lost his trust of the mainstream media, and the internal rifts within pro-AKP media establishment are taking their toll. Let’s start with the second piece of the puzzle.

Al-Monitor contributors explained the notorious "penguin incident" (when police attempted to evacuate Gezi Park on May 31 and hundreds of protesters poured into Taksim, none of the major TV channels reported it, one opting for a nature show about penguins) to demonstrate how mainstream media now walks the government line. Either run by friends of the AKP or manipulated through different means ranging from incentives to outright crude pressure, media outlets that are functioning today are only semi-independent when it comes to political news. Over the years, the AKP has structured a professional army-like media apparatus, where the information flow is under military-level control. It works efficiently in disseminating not only the news to be reported, but how it is to be framed. The pro-AKP media apparatus has so far functioned rather well in molding public opinion to its advantage.

Indeed, several respectable pundits have lost significant professional credibility. Only those with direct personal affiliation to the AKP-sponsored institutions continued to convey Erdogan’s rhetoric during the protests. Everyone else was either quiet or in support of the protests. This silence angered all Turks, especially several AKP elites. Indeed, one of those pundits, Jalal Kazdagli, penned a searing piece asking, “What good is a Turkish media that fails to publish the headline 'Deep Provocation' on the first day of the protests?” The allusion, of course, is to the “deep state” charges against government security services that operate clandestinely to orchestrate coups or to coerce the government.

Kazdagli goes on to label major newspapers known to be run by pro-AKP editors as useless. He explains how these editors were too timid to criticize the protesters and failed to support Erdogan promptly when it was most needed. He concludes that the “new Turkey” does not need such media. In Kazdagli’s analysis, we see acute resentment for almost all AKP media outlets, as now the party portrays the protests as a direct “operation to topple Erdogan from his position,” almost a coup d’etat with the media as collaborators. The repeated argument by core AKP elites is that even those outlets that were considered pro-AKP (partisan) were not friendly enough to the party. Kazdagli ends uncompromising: “This is the end of most of the pro-AKP media; they signed their own death warrant.”

As exemplified through Kazdagli’s analysis, the penguin incident indicates the AKP’s failure to control Turkish public opinion. AKP elites are well aware of this. An internal debate has started to pinpoint the AKP's liabilities in the media. Both ends of the political spectrum, pro-AKP and its critics, agree that this is the end of the Turkish mainstream media, although for different reasons.

On the other side of the coin, the Turkish public no longer trusts the media. Going over the opinion pieces of several well-respected pundits in Turkish, you will see the echoes of Erdogan’s words: “Why are these people protesting?” asked the prime minister, and his favorite pundits followed, “There are no real grievances for the masses to take the streets.” Political repression has eroded the intellectual capacity of the regime’s “independent” pundits. As one protester in Ankara explained to Al-Monitor, “It is the same dish served in different-colored plates, no satisfaction for us.” Another chimed in, asking, “Could you please tell us one opinion here that is unique in all these columns?” When asked why they read these pundits, the reply was, “We really do not, we just hear some of the sentences because they are repeated in the news and we utilize them to connect with others through different virtual meeting places such as Twitter, Eksi Sozluk (an unofficial collaborative online dictionary for entertainment purposes) and Facebook.”

In addition, when dissenting opinions are continuously punished in courts as well as through other means (social media attacks, threats, loss of prestige or maybe employment), voicing any sort of criticism becomes an act of bravery The system has perfected itself so much so that corruption monitoring and transparency in government spending remain unspeakable.

The Gezi Park protests revealed a subculture which seems united only in its humorous and effective methods of critiquing AKP rhetoric. This is the biggest blow to the AKP’s legitimacy because these subcultures are now out in the open for the view of the general public. Gezi activists are one subsection of this alternative information flow. This is not limited to the “secular” Turks; indeed, there are groups in this resistance who criticize the AKP for not being “Islamic enough.” What was deemed marginal has now evolved into reputable and mainstream.

In the writings of this alternative media, Turks refer to all mainstream media as "Pravda" (a nod to state/party control of the media in the Soviet Union) and pay attention to it only to mock the rather barren political rhetoric. This is evident in recent public-opinion polls. The first was a very controversial statement that ignited an uproar among pundits as a mid-June survey reported support for the AKP has fallen to 35%, and several other polls show Erdogan’s Syria policy remains unpopular.

The loss of respectability by pro-AKP pundits may be irreversible. Have the AKP cheerleaders become a liability for Erdogan’s political future? How will the government satisfy the young, vibrant, politically engaged population’s curiosity? This produces a delicate equilibrium for AKP elites. They are well aware of this, yet unsure of how best to handle the situation. So far, the AKP has opted to silence all possible critical voices. None of the tactics adopted in the post-Gezi repression is new. The witch hunt of activists and journalists, assigning blame to ambiguous “foreign” enemies, unknown internal illegal organizations, Orwellian investigations, increasing paranoia and fear for personal and national security — these and other methods have been applied for decades. However, the intensity of the repression is now expected to increase because the AKP’s confidence in its intellectual base has decreased.

It is true that opposition to AKP still lacks leadership and adequate unified political representation in the parliament, but now the AKP lacks a credible intellectual base to mold public opinion.