Jubilant reactions by pro-AKP pundits to Turkey downing a Russian jet were tempered by those of concerned AKP elites and a worried and satirical public. 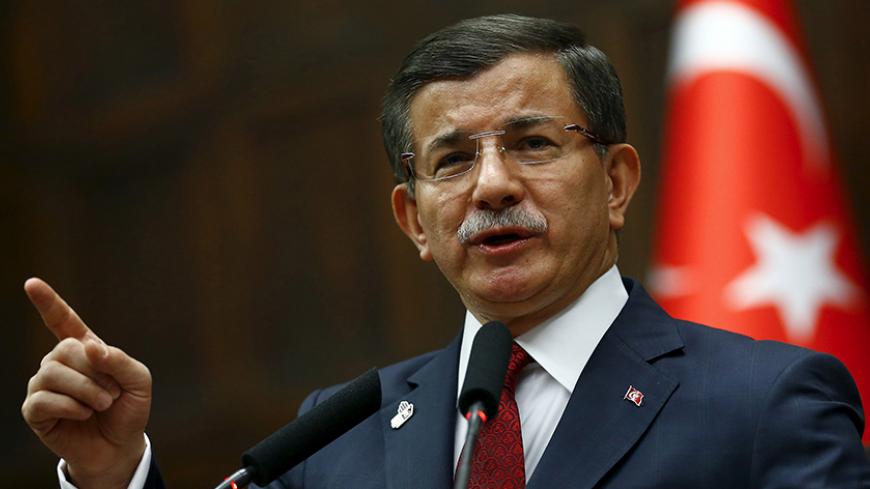 Turkish Prime Minister Ahmet Davutoglu addresses members of parliament from his ruling Justice and Development Party during a meeting a day after Turkey downed a Russian jet near the Syrian border, Ankara, Turkey, Nov. 25, 2015. - REUTERS/Umit Bektas

On Nov. 24, Turkey shot down a Russian Su-24 fighter jet. Across Turkey, the instantaneous reactions on social media included the exuberant, the sober yet accusatory and the satirical.

Perhaps the most surprising were pro-AKP pundits' joyful and gloating responses. They appeared reckless and gleeful in the face of a crisis situation. Some of their social media posts were carried by the mainstream print press.

Ceren Kenar, a columnist for the daily Turkiye, tweeted a photo of Turkish President Recep Tayyip Erdogan in a pilot’s jacket at a testing of the Turkish-made Hurkus jet in June 2012. The heading, in English, read, “With Love from Turkey,” and a caption at the bottom, read, “Yes you can Obama,” an obvious reference to US President Barack Obama’s campaign slogan “Yes we can.” A commenter on Eksisozluk, a collaborative online website, reacted to Kenar’s tweet with the entry, “Those who make money with their ignorance.”

The photo in Kenar’s tweet was also used in a video mocking Russian President Vladimir Putin. The video had thousands of hits within the first few hours of being posted. It also contains footage from the recent G-20 meeting in Antalya, where Putin and Erdogan met briefly, and in one part one can hear Erdogan in the background saying to Putin, “See you.”

Ragip Soylu, the Washington correspondent for Sabah and Daily Sabah, tweeted in English, “Obviously Turkey sent a fuck you message to Putin, since Russia kept bombing Turkmen rebels in Latakia despite several diplomatic protests.” Soylu faced harsh criticism on social media, with one commenter writing, “If Russia cuts off the natural gas supply, then I will see about your arrogance.” Both of the newspapers Soylu works for are owned by Calik Holding, whose CEO, Berat Albayrak, is Erdogan’s son-in-law and Turkey's newly appointed minister of energy and natural resources.

Ibrahim Karagul, columnist for the pro-AKP daily Yeni Safak, issued a series of tweets, including “A Russian-Iranian invasion of our southern border cannot be accepted. This scheme will not stand. The attitude of the Russian plane was arrogant and it was taken down.” He also posted, “At this rate Putin’s charisma will be wiped out shortly. He will realize that Syria is not Ukraine. The price of yielding to Iran’s pressure may be high.”

The Anadolu Agency, the state-run official news agency, also became the target of criticism after it failed to report Putin’s reaction to the attack on the Russian plane. The absence of reporting on the response from the Russian leader was so conspicuous that someone joked on social media, “Let’s report the news from Russia for the Anatolian Agency.”

The headlines and articles in several right-wing, pro-AKP newspapers exhibited a certain cockiness. Yeni Akit wrote, “With Damaged Charisma, Russia Starts Counterattack.” Yeni Safak ran an op-ed titled “Fire and Forget: Those Who Can Attack a Superpower Can Attack Anyone.” Sabah chose the headline “Turkey Taught Putin a Lesson,” similar to the Daily Telegraph story “The Russians Had It Coming to Them.”

Almost all the pro-AKP pundits made sure to note that the United States was backing Turkey’s right to defend its borders and the rules of engagement. This intense and newfound love for the United States was ridiculed by an anonymous Eksisozluk commentator who wrote, “This event demonstrated that Turkish nationalism rests upon Americanism. Those who support the attack on the plane and engaging in ‘great nation’ rhetoric almost always have the same follow-up sentence: ‘We are safe as long as we have US backing.’ This precisely is hamburger nationalism.”

One early and extreme reaction came from AKP parliamentarian Samil Tayyar, who wrote, “Thanks be to God. Let us be the one to be condemned for a while.” The reaction to his incautious attitude was voluminous and harsh. Most people bluntly told Tayyar that if a war were to erupt, he would flee the scene, leaving ordinary people to bear the cost of the AKP's arrogance.

Of course, not all reactions were along the lines of the chest-thumping AKP punditocracy, and in fact, with the passing of time, the pro-AKP pundits’ enthusiasm waned significantly. One example of this is “A Turkey That Can Say No and Can Shoot Down a Plane,” a contribution by the popular Turkiye columnist Yildiray Ogur. Ogur’s reaction provides clues about the thinking of AKP bureaucrats, who tended to be sober and guarded. Except for the bold title, there was little comment about the actual attack except to criticize Turkish citizens who view Russia as a victim or dare to defend Russia's actions. On their social media pages and pronouncements, the AKP elite did not directly target Russia, gloat about the attack or try to provoke hatred toward Russia. Rather, they chose an easier target: the Turkish opposition.

Takvim and Yeni Safak referred to critics in the opposition as “traitors among us” and mostly targeted pro-Gulen movement social media accounts. This group was accused of being pro-Russian and pro-Assad, but not Turkish, and branded as Russian spies and collaborators. Journalists, government officials and gendarmerie who in January 2014 had apprehended truckloads of weapons allegedly being transferred by the National Intelligence Agency to Turkmens in Syria were illogically accused of somehow being responsible for the current crisis with Russia. Erdogan remarked, “Our people will not forget those who stopped the MIT trucks.”

A senior AKP bureaucrat privately told Al-Monitor that the joyous columnists and pundits did not represent the government’s view, pointing out that they were employed by private media companies. He said, “I don’t approve of this arrogant and jubilant tone. Turkey did what it had to do, but there is no reason to gloat.” Those in a more somber mood were focused on the rules of engagement and the multiple warnings issued to the Russians, the sentiment evident in a Turkish flag splattered with eggs in Moscow and a veiled threat from Chechen leader Ramzan Kadyrov that Turkey would come to regret its actions.

Although criticizing Russia for spreading propaganda about Turkish support of the Islamic State, the AKP elites were savvy enough not to pontificate on the potential economic and security-related repercussions of the attack for Turkey. Yeni Safak columnist Ali Bayramoglu instead wrote, “To down a plane because it has violated our airspace for 5 minutes, rather than escorting it out, seems like an exaggerated and half-witted show of force. Let’s hope the crisis will not escalate.” Bayramoglu’s concerns were seconded in hundreds of posts on social media.

Some of the more interesting reactions were to be found in satirical anonymous accounts. In one example, a user posted a photo of Putin with a flaming gas burner as a halo and joked, “The plane isn’t that big a deal, but it was carrying [natural] gas.” A troll account with a profile photo of a young woman claiming to be perpetually single tweeted, “As a response to the bombing of their plane, I would suggest Russian girls avoid Turkey.” There are a large number of Russian brides in Turkey, and they are a source of resentment among some Turkish women.

In a tweet with an animated video, Putin and Erdogan are sitting at a bar, and Putin suddenly grabs a mug and strikes Erdogan with it. The caption reads, “Putin: Damn it, Reco [Erdogan] … a Russian plane.” As another tweet suggested, if you have to shoot down a plane, go attack one that belongs to Papua New Guinea or Bangladesh. Why are you messing with Putin?

That last post raises the most interesting question about the incident: After five years of diligently crafting policy toward Russia to maintain a working relationship despite the deep rift over Syria, why did Turkey mess with Putin by reacting the way it did?