Comments, both arrogant and jubilant, celebrating Paris massacre on social media rub salt into the unhealed wounds of IS attacks in Turkey. 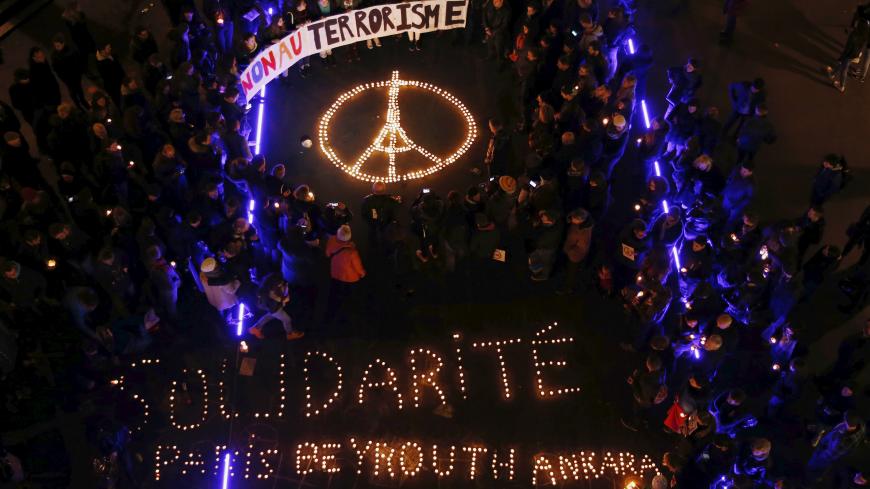 People gather around candles during a ceremony for victims the day after a series of deadly attacks in Paris, in Lausanne, Switzerland, Nov. 14, 2015. The banner reads "No to terrorism" and the candles read "Solidarity Paris Beirut Ankara." - REUTERS/Denis Balibouse

As Paris was experiencing a series of bombings and explosions Nov. 13 that left at least 129 dead, Turkish social media and pundits were quick to comment. While a majority simply shared their feelings of sympathy, sorrow and prayers, there are a few groups whose reactions were almost cheerful and celebratory in Turkey. Indeed, these groups are not exclusive to Turkey, but can be seen in various parts of the world, from Egypt to the United States.

Turkish Islamists’ reactions were slightly different this time in comparison with the appalling Charlie Hebdo attacks in January. Here is a short list of the most notable reactions making waves in Turkish social media:

Since June, Turkey has been attacked twice by IS suicide bombers and lost 130 people. These attacks, how they were perceived in the world and how the Turkish government handled them turned into another rift between certain groups after the Paris massacre as well.

For example, AKP parliamentarian Samil Tayyar asked, “Has there been any stupid party leader, civil society member or former deputy in France who claimed these attacks to be the work of the French state (intelligence agencies)?” He was making a reference to the HDP, and more specifically Demirtas’ comments after the Ankara massacre. However, reactions to Tayyar's question were less than pleasant. Commentators responded with potent questions such as “Did the French government tell the parents of the attackers, ‘We cannot arrest suicide bombers until they blow themselves up’ when the parents shared their suspicions about their own kids with the government before the attacks took place?” and “Did the attackers pass three police checkpoints until they reached their target?” and “Did the French police gas the victims after the attack?”

Indeed, observers compared several images of the Paris attacks with those of the one in Ankara. Also, journalist Ilhan Tanir tweeted, “After Ankara bombings where over 100 people died, [Turkish President Recep Tayyip] Erdogan issued a written statement. After the Paris attacks, he offered his condolences on live television, just 15 minutes after [French Prime Minister Francois] Hollande.” Another pundit, Ozlem Dalkiran, asked, “IS has taken responsibility for Beirut and Paris bombings, but not for Oct. 10 Ankara bombing, why not? My mind has indecent answers, but maybe someone has a decent answer.” References have also been made about there being being visible solidarity between citizens in Paris, while there were mixed reactions when the Ankara bombings happened.

Sadly, messages of congratulations and jubilation poured from anonymous or troll accounts. Some of these were regarded as pro-IS accounts tweeting in Turkish. While they rejoiced the high number of victims, one wrote, “Paris attacks are sufficient to demonstrate the operational strength of global jihad. This means in Russia blood will flow like an ocean.” Anonymous accounts carrying the AKP banner tweeted, “Center of Paris is exploding. You can’t solve this by unplugging Eiffel Tower. You must respect the Muslims.” Another commenter wrote, “City of love, Paris. We loved you in flames. Christians are terrorists.”

The same account also tweeted, “If I had a newspaper, this would be my headline: The lions of Baghdad hunted down the French.” One account posted the photos of the Charlie Hebdo attackers and said, “We did not forget you, brothers. You guys are the highest ranking engineers of these holy events. May peace be upon you.”

Yet, the largest volume of comments on social media focused on the global question “Is this true Islam?” Cartoons in global circulation were also shared among Turkish social media users along with an intense debate about how to deal with Islam and terror. Prominent pundit Nuray Mert penned a searing column titled “Poor man’s consolidation: this is not true Islam.” She argued that Muslim scholars and commentators have to stop praising leaders of radical groups and their ideologies and making excuses for them. Given the fact that Prime Minister Ahmet Davutoglu has gone on the record trying to justify IS, and mainstream media outlets such as the Milliyet daily have referred to Turks who have died fighting for IS as “martyrs,” Mert’s call is a tall order. It has also been claimed that Turkey ranks seventh in the volume of pro-IS tweets. A quick search on social media for the hashtag #ISISandAKP reveals dozens of cartoons, alleged quotes and remarks in English and Turkish about AKP members’ baffling remarks about the organization over the last two years. One commentator reminded everyone that it was the 12th anniversary of the Jewish synagogue bombings, adding, “It was not true Islam then either.” As “true Islam #GercekIslam” became a trending topic on Nov. 14 for Turkey, one cheeky tweet read, “As true Islam still cannot be found, a group of unreal Muslims accepted responsibility for Paris attacks.”

Although there are many unanswered questions, the Paris attacks indicate that postelection Turkey remains deeply divided even in the face of human tragedy.