Ever since last week, Turkish women have been giving their male counterparts a taste of sexist remarks by switching sex in popular sayings or political statements. 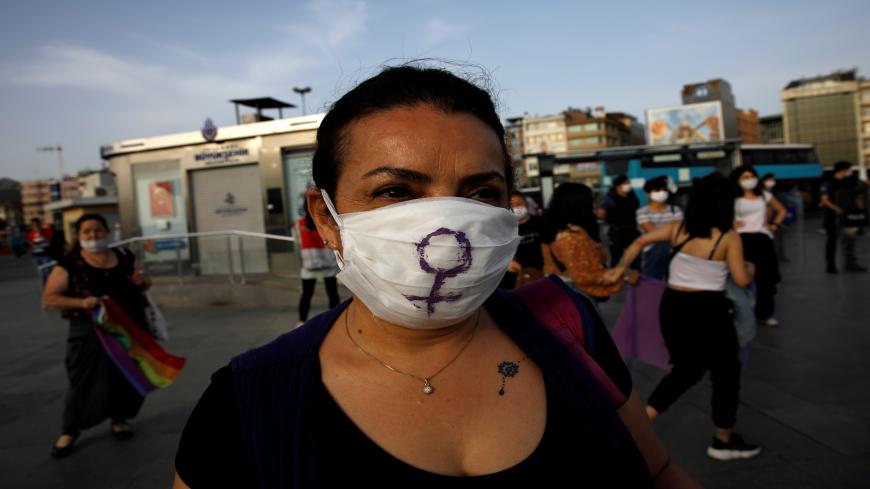 A woman wears a protective face mask as demonstrators keep social distance by holding onto purple ribbons as they protest for women's rights and against child abuse, amid the spread of the coronavirus, Istanbul, Turkey, May 20, 2020. - REUTERS/Umit Bektas

An unprecedented flurry of reverse sexism raised its head in Turkey’s lively Twittersphere last week. “I am a modern woman, so I help my husband with housework,” said a tweet, whilst another declared, “The greatest gift a man can offer his wife is his virginity.” Simply by switching the word “woman” with “man” and “wife” with “husband,” Turkish women — and some men — of all walks of life mocked misogynist or chauvinistic expressions, idioms, maxims and particularly political statements that discriminate against women.

“Thousands of tweets under the hashtag #menshouldknowtheirplace were witty and impactful,” Meltem Agduk, gender programme coordinator at the United Nations Population Fund in Turkey told Al-Monitor. “No wonder that some [conservative or chauvinistic] groups felt threatened by it and tried to counter it with another hashtag — #womenshouldknowtheirplace — or criticize it with media declarations. But these attempts have been futile; even after a week, the online campaign is still going strong.”

The spontaneous campaign started June 3 with a single, punchy tweet, “My husband can work if he wants” — an allusion to an often heard saying by men who try to drive home the point that they “allow” their wives to work. A 2001 legal amendment gave married women in Turkey the right to work without seeking spousal consent. But traditions, mentality and a host of legal and structural obstacles — such as the absence of child care centers and gender pay gap — prevent many women from joining the workforce. Only 34.5% of women in Turkey work, which is nearly half of the European Union average (61.4 %).

Replies to the tweet by Ruq, who now has more than 95,000 followers, poured in, repeating all-too-familiar sentences with the roles reversed: “I would never allow my husband to work, his job is to take care of my kids” and “Since we both work, I lend a hand to my husband while he does the housework. I even load and unload the dishwasher or shop on the weekends. What’s the big deal with housework anyway?”

But it was only after Gaye Su Akyol, a singer, activist and wit, started the hashtag #menshouldknowtheirplace that this initiative snowballed into a trending topic. Retweeting Ruq’s tweet, Akyol commented, “Men should be chaste. They should not laugh out loud in public.” This was a reference to a comment in 2014 by Bulent Arinc, one of the heavyweights of the Justice and Development Party (AKP) then and a notorious anti-feminist, who said that women should be chaste, act with modesty and “refrain from laughing out loud in public.”

Within hours, many women’s rights activists and Twitter users joined in creating a chronicle of headline-grabbing sexist statements by government officials or acts of violence against women. One said that a man wearing shorts on public transport is “asking to be harassed,” which alluded to a nurse who was kicked for wearing shorts on a bus in Istanbul in 2016. “Why would a decent man be out on the streets in the early hours of the morning?” joined in a male tweeter, referring to some of the statements made when a 19-year-old was threatened with a knife and raped in Istanbul’s posh Bagdat Caddesi four years ago.

Most of the political satire targeted AKP officials whose statements often border on chauvinistic and misogynist. Many users switched around President Recep Tayyip Erdogan’s remarks that motherhood was the highest honor bestowed upon women and that women who rejected motherhood were “deficient.” Others mocked the words of an ex-minister who said that family values were threatened if “men” did not know how to bake a good traditional borek.

Opposition politicians joined in the campaign. “We are going to put up men from each constituency [in key posts] so that men can start being actors in politics, not mere accessories,” tweeted Canan Kaftancioglu, the Istanbul chair of the Republican People's Party (CHP). Some CHP municipalities started tweeting that they were considering the launch of “blue buses” so that men can commute without harassment, mocking the AKP initiative of women-only pink buses.

Ruq was surprised by her newly-found fame. “I posted a [similar] tweet last year but nothing happened then,” she tweeted. Akyol explained that the campaign had snowballed because women have become tired of femicides, domestic violence and daily demonstrations of sexism. “We are tired of this nauseating system where the name of the murder suspect is disguised, but the morality, life and choices of the victim are questioned. … It is 2020 and we want to do something about this.”

“The initiative showed us plainly how sexism exists in the everyday life in word and deed,” Agduk noted. “It compliments, motivates and encourages other — more formal and structured — gender equality campaigns that international organizations and private groups carry out in Turkey.”

One of those groups — Koc — launched in 2017 a Manual for Gender Mainstreaming in Communications, proposing alternatives for sexist forms of speech.

“From a communicator’s point of view, this was a brilliant campaign,” agreed Zehra Gungor, a communications expert and an activist for women’s entrepreneurship. “The tweets were spontaneous, intelligent and very, very funny.” She told Al-Monitor that she had also joined with a tweet that read, “We support our male colleagues who want quotas for men in political parties.”

Not everyone was amused. While most women’s groups, such as Stop Femicides Association, applauded the campaign, Women and Democracy Association (KADEM), vice-chaired by the president’s daughter Sumeyye Erdogan Bayraktar, lambasted it, saying it was against the “values of society.” On June 9, Ismail Kilicaslan, a columnist of Yeni Safak, also blasted the initiative, saying what started “innocently” had turned into offending religion by paraphrasing certain words of the prophet. “This is a dark project,” he wrote, comparing it to the attempted coup against the government on July 15, 2016.

A feisty Akyol retorted with a tweet saying she was surely on the right path if her tweets irked conservative and chauvinistic groups. Posting an image of herself on a sunbed, she said she was toasting “to bury bigots who are disturbed [even] by the ‘f’ of freedom and the ‘w’ of woman in the dusty pages of history.”