The July 20 attack on Suruc was designed to send a strong message to Kurds, the United States and Turkey. 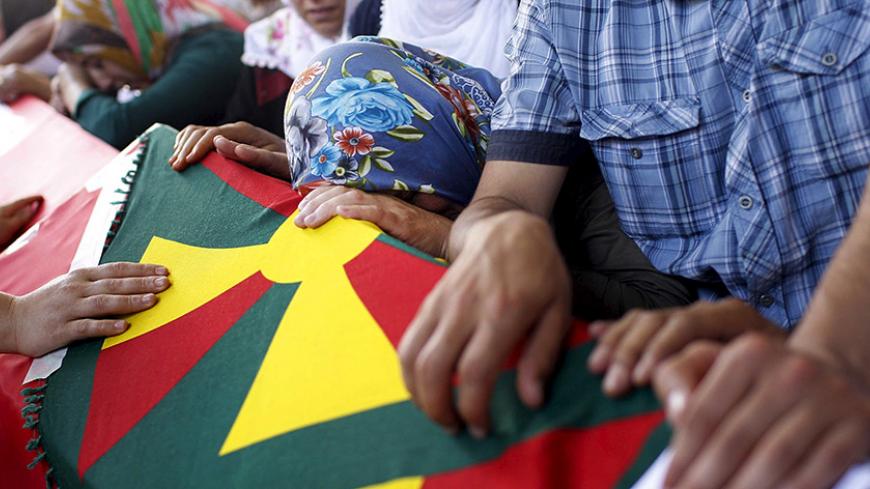 Relatives of victims who were killed in the July 20 bomb attack in Suruc mourn over the coffins at a cemetery in Gaziantep, Turkey, July 21, 2015. - REUTERS

While money, weapons, people and all sorts of contraband freely flow across the border from Suruc, Turkey, to Syria, toys could not make it across. More than 30 young people who had launched a campaign to take humanitarian relief supplies to Kobani lost their lives July 20 in an apparent suicide attack just as they were briefing the media on their project. About 100 of the activist leftist young people also were wounded.

The Islamic State (IS) has not yet officially claimed responsibility, but reports from the field suggest it was an IS suicide attack.

It appears IS did not wait to be classified as a terror organization in the Turkish legal system before adding to its list of bloody attacks against Turkey.

Turkey had already encountered IS operations in a March 2014 clash at Nigde in which three security officials were killed; the June 2014 seizure of the Turkish Consulate at Mosul; the siege of the Tomb of Suleiman Shah in October; the January suicide attack against a police post in Istanbul; and the June bombing of the pro-Kurdish Peoples' Democratic Party (HDP) election rally at Diyarbakir.

The target was a youth civil society association with high media visibility related to Kobani, which is a sensitive issue for Turkey. It is noteworthy that the attackers chose a civilian, leftist and pro-Kurdish activist group instead of a military facility or a state institution as it usually does in Egypt, Jordan and Iraq.

The timing of the attack was well-chosen. That the attack was carried out in a Turkish town instead of Kobani indicates the primary intended audience was public opinion in Turkey, especially that of the Kurds. The attack also coincided with a political crisis prevailing in Turkey in the aftermath of the June 7 elections.

That the attack most likely was a suicide operation is a signal of power and challenge. If you ask who the recipient of the message was intended to be, I — unlike many others — believe that it was not Turkey but the US-supported, Kurdish nationalist Democratic Union Party (PYD) and the Kurdistan Workers Party (PKK). With this attack, IS was sending a message to the PYD and the PKK to watch their steps after their success at Tell Abyad, if they are now thinking of advancing toward Afrin in the west and Raqqa in the south with close US air support.

By moving the conflict in the opposite direction of Raqqa to Turkey, IS is trying to ease the pressure it is under at Raqqa and Azez in northern Syria.

I believe the perpetrator of the attack is a Kurdish-origin citizen of Turkey. Most of those who joined IS from Turkey are Kurdish-origin nationals. According to available intelligence reports, the pool of potential attackers IS has put together for attacks against Turkey is made up of Turkish Kurds. By selecting a Kurdish-origin suicide attacker, IS is sending the message that jihadi ideology is more powerful than ethnic nationalism.

It has to be emphasized that this attack by IS attempts to draw Turkey more into Syria while transferring clashes in Syria to Turkey.

The message of IS to Turkey, its secondary intended recipient after the PYD and the PKK, is, in short: "If you step up attacks against us, you will pay the price.” Turkey had indeed stepped up operations against IS inside Turkey over the last six months; that resulted in detentions of 450 people in several major cities. Border controls between Syria and Turkey were reinforced, resulting in the capture of about 300 IS militants who wanted to cross the border in both directions. Until now, about 15,000 foreign nationals were put on the blacklist banning their entry-exit through Turkish borders. About 1,500 foreigners were deported for their IS connections. Over the last six months, 1,100 people were refused entry to Turkey.

Another message to Turkey is that IS is aware of socio-cultural and political fault lines of Turkey that it can cross at any time.

The Suruc attack, immediately after a high-level US delegation's visit to Turkey to discuss strategies against IS, also had a message for Washington. That message was that IS is an indigenous local player able to execute its will despite US efforts to mount a war of proxies — and that US efforts to embolden its anti-IS allies won’t work.

Did the attack serve its purpose?

Witnessing the controversy in Turkish public opinion after the attack — and seeing that the political elites could not even come up with a message of unity against such an attack — one has to admit that the attack has served its purpose. It is not a surprise that IS targeted either the PKK or the pro-Kurdish HDP in all its bloody attacks in Turkey, as dictated by the well-known IS strategy of provoking confrontation between the government and Kurds. A cursory review of social media in Turkey clearly shows a split in public opinion with the "they had it coming" wing made up of Justice and Development Party (AKP) supporters, Turkish nationalists who see the PKK as more dangerous than IS and, of course, local IS sympathizers. The other wing is the "we will avenge" group of PKK sympathizers and radical local leftists.

The remark by HDP leader Selahattin Demirtas, "Our people have to ensure their own security,” was interpreted by many as a desire to legitimize armed PKK presence in cities and an expression of hope that coming up with “local security structure” is an alternative to the state. The PKK appears to be using the Suruc attack as a promising opportunity for its long-aspired "local security" setup. It won’t be a surprise if now, with the legitimacy provided by the Suruc attack, the PKK’s urban structure, the Kurdistan Communities Union (KCK), will set up roadblocks, check identities, question people they see as IS sympathizers, raid IS-related facilities and prevent state security forces from entering areas where mostly Kurds reside. The temperature in the streets is bound to increase in coming days.

Neither AKP elites nor the PKK nor the HDP intends to denounce the Suruc attack and search for new beginnings together. Both want to capitalize on the ramifications of the massacre for their own political ends.

There is also a perceptible split between the elites and the street after the attack. Anger accumulated by radical Kurdish and leftist groups is already visible in the streets and is likely to be turned against the AKP decision-makers and the state next. Worried about massive street protests, the AKP government has instructed security forces to maintain law and order without tolerance.

With the uncompromising attitude of security forces, it is inevitable that the current tensions will only increase.

In short, it is not far-fetched to say that with this attack, IS is trying to:

Unfortunately, given the timing, method and goals of the Suruc bombing, more attacks of the Suruc type are strongly possible given the capacity deficiency of Turkish intelligence and security bureaucracy, the AKP government’s ideological blindness and unwillingness to take on IS and the gaps in the Turkish legal system, especially in processing IS militants.