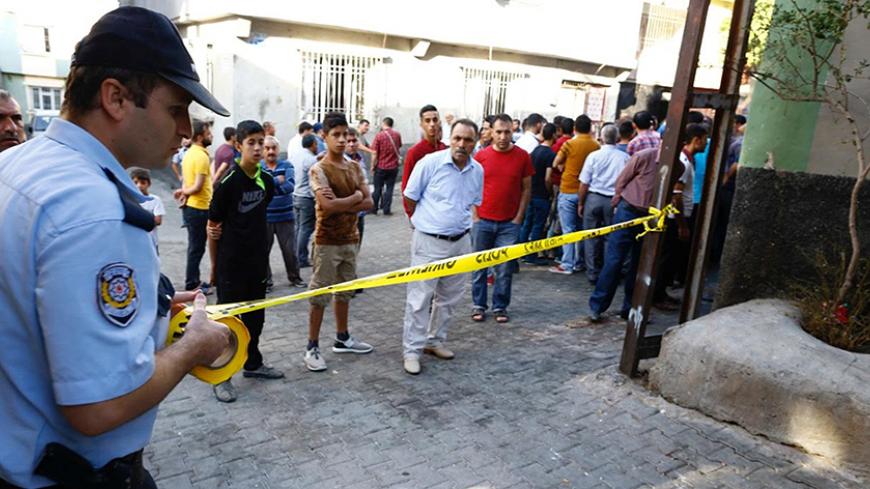 A police officer secures the scene of an explosion where a suspected suicide bomber targeted a wedding celebration in the city of Gaziantep, Turkey, Aug. 21, 2016. - REUTERS/Osman Orsal

Turkish authorities have yet to assign blame for the recent wedding massacre at Gaziantep, but they themselves must shoulder a considerable amount of responsibility.

Officials knew months ago that the Islamic State (IS) was considering an attack in Gaziantep, yet they did nothing. Regardless of which group is ultimately found to have committed the Aug. 20 suicide bombing — which killed 54, including 29 children, and wounded more than 90 others — Turkey should have been prepared.

It's certainly no secret that IS has a strong presence in many areas of Gaziantep. Court indictments related to the killing of more than 100 people in Ankara back in October had already indicated the possibility of a Gaziantep attack. Then in May, Yunus Durmaz, the "prince of IS" at Gaziantep, blew himself up — apparently to avoid surrendering to police who raided his home. In his computer, officials found documents about potential attacks.

Durmaz asked Ilham Bal, the chief of IS in Turkey, for permission to launch attacks in Gaziantep and Antalya, particularly against members of the Kurdistan Workers Party (PKK), but also against civilians.

“PKK people are holding weddings," Durmaz said in one document. "There are some [civilian] relatives who come to these weddings, but most are PKK people. They display the PKK flag at the wedding, sing PKK songs. Shouldn’t we hit such an occasion? There will be a wedding soon. If you approve, God willing, we will hit it.”

Durmaz’s computer notes continue: “We have determined the best civilian targets. In Antalya there is a nightclub where world-famous artists and tourists congregate. Every night foreign and local tourists assemble there. More than 1,000 of them. We will launch a suicide attack against it. … Another target is Americans. In Gaziantep there is [a United Nations] office with about 45 people, Turks and foreigners. [The] French have an office too. We will hit them with suicide attacks. … These are the targets. We could have hit soldiers and police but didn’t because we felt that would impede our major operations. After our operations, we will open the new season if the Turkish republic doesn’t take steps back and [IS] doesn’t tell us to stop.”

Durmaz details how he trained 400 militants at Gaziantep. He said 150 of them were put on the payroll and were ready to take over the city.

IS, which has made much use of the Jarablus-Gaziantep corridor and an al-Rai-Kilis border stretch, was able to set up its Gaziantep cells because of Turkey’s nonchalance. We all remember how IS supporters celebrated the Charlie Hebdo attack in Paris in the streets of Gaziantep.

Elif Dogan Turkmen, a deputy of the opposition Republican People's Party (CHP) investigating the Gaziantep bombing, spoke of a reality everyone in the city knows about but the government ignores. He said, “IS is very well-organized in this city. Three-four neighborhoods are fully under their control. … People are convinced the government allows this.”

The state knows what is transpiring. According to a police intelligence report leaked to the media in April, today there are about 20,000 people supporting Salafi-Takfiri ideology in Turkey. The report says this is about the same level as in Tunisia, Saudi Arabia and Jordan, and is a serious threat to Turkey.

The report says the war in Syria draws Turks to IS: “We have seen that the desire to loot, to get married and to achieve martyrdom have made Syria an attractive choice. It has been noted that the [IS] declaration of a caliphate in June 2014 has given life to dreams of these segments for an Islamic state. They are motivated to live an Islamic life in lands ruled by Islam, further compounded with their expectations of receiving land, housing and salaries from the organization.”

The report added that Salafists find most of their recruits in Konya, Adana, Istanbul, Gaziantep and Diyarbakir.

Though IS has not been officially designated as the perpetrator in the Gaziantep attack, there are several reasons to suspect it is responsible.

A review of earlier suicide bomber or remotely controlled bomb attacks for which IS is blamed reveal target selections and motivations:

The message of the three most recent attacks listed above was a warning to Turkey, which had adopted some anti-IS measures, and also to the international community.

The Gaziantep attack followed the expulsion of IS from Manbij by Syrian Democratic Forces led by the YPG. IS militants left Manbij in a 500-vehicle convoy and moved to Jarablus, which abuts the border with Turkey. There were predictions that IS would avenge its Manbij defeat and that is quite possibly what happened. It is also likely that, just as IS triggered Shiite-Sunni conflict in Iraq, IS aims to inflame the environment of ethnic conflict in Turkey.