Three reasons the Islamic State is focused on Turkey

While the Islamic State intensifies its activity throughout Turkey, questions are raised as to whether Middle Eastern wars are now engulfing Turkey. 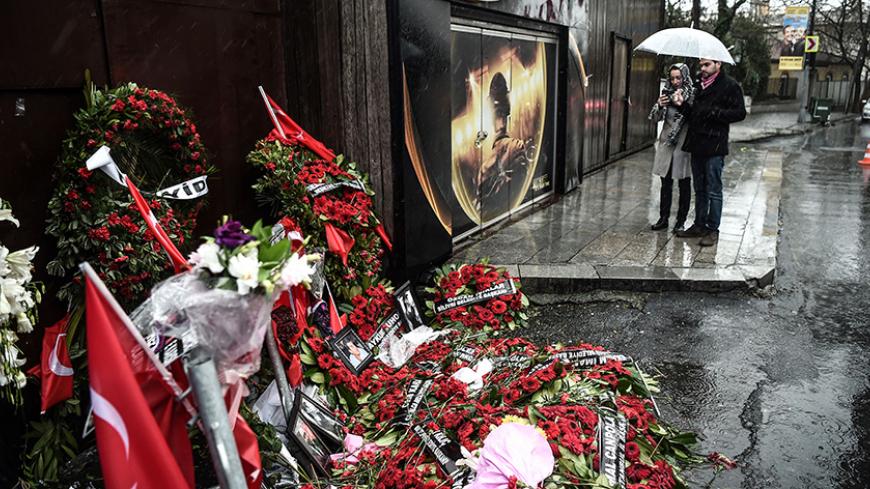 The year 2016 was marked by a dramatic increase in terrorist attacks in Turkey by the Kurdistan Workers Party (PKK) and the Islamic State (IS). In 2016, major cities were hit by 20 bomb blasts committed by a variety of culprits, killing a total of 225 people. As the year drew to a close, Turkey overflowed with wishes for less violence, less terror and less oppression.

The new year, however, began with a nightmare — IS launched a savage attack on a posh Istanbul nightclub, claiming 39 lives. The mayhem dashed the hopes for a better year just an hour after Turkey entered 2017, deepening the gloom and raising fresh questions about the country's future.

The violence rattling the country comes from two sources — the PKK, whose actions have become increasingly linked to the Turkey-Syria context — and IS, whose attacks are also Syria-related.

The IS bloodshed in Turkey began in 2014 with a single attack that claimed three lives. In 2015, four attacks resulted in 144 deaths. In 2016, the number of attacks rose to seven and the death toll to 167, if we also include the latest shooting at Reina nightclub. So, with 11 attacks and 311 victims in two years, IS seems to treat Turkey as one of its exclusive targets. Three main reasons could explain why.

First, the IS attacks in Turkey appear to mirror the group's battles in Syria. In 2015 — the year IS was defeated in the fierce battle for Kobani, the Kurdish city in northern Syria — it targeted mostly Kurds and Kurdish-related events in Turkey. After July 2015, confrontations between Turkey and the group became more serious, going beyond the pattern of harassment and retaliation. As a result, IS turned to attacking big Turkish cities in 2016, targeting tourist sites, the country’s biggest airport and, most recently, a popular entertainment venue.

This outlook suggests a step-by-step projection of the Syrian war into Turkey and a gradual declaration of war. The indictment over the 2015 bombing of a peace rally in Ankara, which claimed 104 lives, had included evidence of an IS "declaration of war" on Turkey. Similarly, an IS defector told the British daily newspaper The Independent after the massacre at the Reina nightclub that the group "has declared war on Turkey."

Second, IS undoubtedly sees Turkey as a realm to wage jihad. For IS, Muslims who do not conform to its understanding of Islam are "infidels" and their countries are "taghut," meaning lands that have rebelled against the teachings of God, an outlook that makes Turkey a target country. The aforementioned indictment refers to communications between the group's Syria-based Turkey chief and its emir for the southern city of Gaziantep, in which they discuss orders to strike "the PKK, touristic areas or Turkish soldiers — it doesn't matter" and speak of assurances that "as many [suicide bombers] as requested" would be provided.

Additionally, Turkey — with its 911-kilometer (566-mile) border with Syria and 384-kilometer (238-mile) border with Iraq — is a natural realm for expansion and logistical support for IS. A Muslim country at the crossroads of the Caucasus, Central Asia and the Middle East, Turkey's geographical location and social fabric make it a potential living and thriving space for IS. This was manifested also in the Reina massacre, whose fugitive perpetrator is believed to be from the Uighur community, a Turkic-speaking ethnic group concentrated mainly in China.

Most importantly, however, IS has been able to recruit in remarkable numbers in Turkey. Today, the Salafist group has become a gravity center for Turks inclined to religious fundamentalism, with a network of cells in a number of regions and occasional visibility in public spaces such as mosques and coffee houses.

Findings and concerns on this issue are not something new. In a June 2015 interview, for instance, Serhat Erkmen, a senior researcher at the 21st Century Turkey Institute, issued the following warning, based on field studies: "If we take into account the mujahedeen who went to Syria and Iraq for jihad, the family members who accompanied them and those who gave them logistical and other support, the total number … is close to 10,000. … Families account for about 60% of those who went [to Syria and Iraq]."

Journalist Metehan Demir wrote in a July 2016 article, "According to reports by police and security services, there is a core group of about 60 [IS militants] in Turkey who have been trained professionally abroad and are skilled in brainwashing, organizing cells and planning attacks. They are constantly on the move along a route including Istanbul, Sanliurfa, Gaziantep, Hatay, Batman, Adiyaman and Kahramanmaras. In addition to this 60-strong core group, there are 1,800 [militants] who have obtained combat training and served as support elements in Syria. When it comes to those who have made trips to Syria and those who espouse the lifestyle of IS and are ready to march on its path, their numbers in Turkey are said to be in the thousands. Sadly, those figures are not just speculation."

After the Reina attack, more than 50 IS suspects were detained. According to Justice Minister Bekir Bozdag, 520 IS members are currently incarcerated in Turkish prisons, among them 246 Turkish nationals.

Obviously, Turkey is faced with a very serious problem. Yet, the ruling Justice and Development Party (AKP) and its de facto partner, the Nationalist Movement Party (MHP), have come up with quite a simple approach to the issue. They lump the PKK and IS attacks together with Fethullah Gulen's July 15 coup attempt, and explain all those events as elements of pressure and even a covert war as part of a foreign plan against Turkey's unity. Ignoring the various aspects of the problem, the AKP and the MHP see it only as a series of provocations emanating from an external enemy.

The security-focused political climate and measures, the mounting crackdown on the media and freedoms, and the fact that this oppression is increasingly becoming an ordinary thing should all be seen in the same context. Amid the rising nationalist wave, the public may be closing ranks against the spiral of violence while supporting Operation Euphrates Shield in Syria, but the violence and the authoritarian political course are at the same time stoking the sense of insecurity and apprehension.

Turkey's Syria policies are among the sources of these feelings. It should be noted that on the whole Turkish society is aware that the government's military operations in Syria, which target IS but are essentially aimed at blocking the advance of Kurdish forces, are bringing the Syrian war to Turkey.

Turkey's struggle with IS terrorism is a major political test. It is beyond doubt that the government needs a profound review of the situation, from a fresh vantage point and with different measures.