A new report by Turkey’s Interior Ministry takes a kindly look at the country's fight against Islamic State. 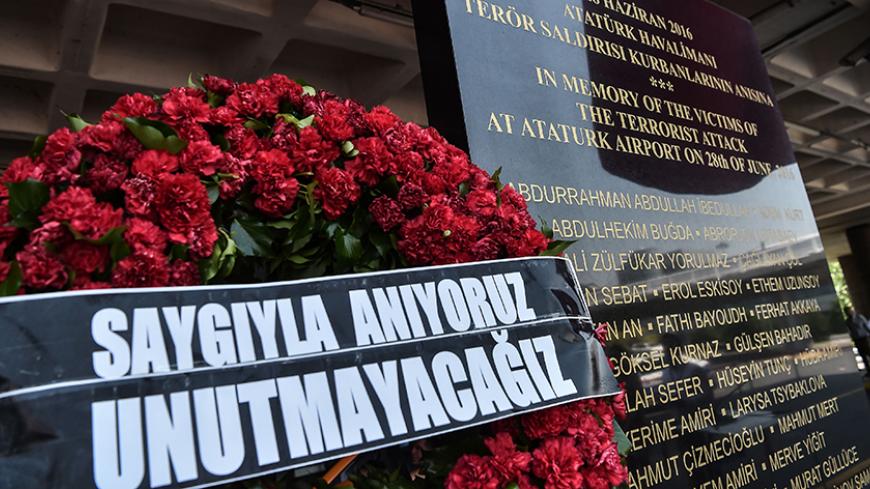 A wreath reading "We will not forget" and a commemorative plaque are pictured during a memorial ceremony one year after the triple suicide bombing and gun attack by the Islamic State, Istanbul, Turkey, June 28, 2017. - OZAN KOSE/AFP/Getty Images

Turkey’s Interior Ministry published a 76-page report this week that purports to document its fight against the Islamic State, part of an apparent effort to counter widespread if unjustified claims that it's doing the opposite: enabling the militants. The document’s publication coincided with a series of fresh raids on suspected IS terrorists across the country.

The first section of the report, which is accompanied by an English-language translation, rehashes the origins of the terror outfit and does little to enhance existing literature on the subject. There is also a whiff of spin in some of its references to IS depictions of Turks and their relationship to Islam as “heathens” and “apostates.” The report, by Turkey’s undeniably authoritarian government, declares, “They deem living and voting in a democratic country as infidelity.”

But the latter sections of the report provide useful chronology and data on the number of IS attacks in Turkey, as well as the sorts of measures the Turkish authorities are now taking. The very real threat IS poses to the country was most recently and gorily manifested in the January attack on the Reina nightclub in Istanbul that claimed 39 lives.

It wasn’t until March 2015 that Turkish authorities began to properly crack down on IS networks inside Turkey, arresting scores of individuals accused of supporting the terrorist group. The same year, Turkey formally joined the military campaign against IS and last August, Turkish troops intervened in Syria, driving IS out of the areas it controlled along the Turkish border and pushing further south to the city of al-Bab, another IS stronghold. The intervention came at a heavy price, with over 70 Turkish soldiers killed in those operations. In December, two Turkish soldiers held captive by IS were burned alive in retaliation, their gruesome executions captured in a video that was then circulated by the jihadis. The Interior Ministry report makes no mention of the grisly affair.

Selim Koru, a senior analyst at the Ankara-based think tank TEPAV, told Al-Monitor, “The government has been taking IS seriously for some time. It has been implementing the same counterterrorism strategy as with the PKK, which is to cast a wide net in surveying and going after the cells aggressively.” The PKK is the acronym for the Kurdistan Workers Party, the Kurdish rebel group that has been waging a bloody campaign for self-rule inside Turkey since 1984.

Koru went on, “Last year, IS released a wave of videos on Turkey that made its feelings toward the country and its leadership abundantly clear. That made an impression on the government leaders who personally watch these videos. … This probably bumped up IS on the list of priorities.”

The Interior Ministry report says 9,350 foreign-trained fighters have been arrested since 2011 and that risk-analysis units to monitor the borders were established in 66 different places in 33 different Turkish cities. In 2016, counterterrorism efforts prevented 22 planned IS attacks from being carried out.

To be sure, Turkey is the country that has suffered most from IS, the report notes. The group has conducted 14 attacks against Turkey, including 10 suicide bomb attacks and three shooting attacks. Some 304 people have lost their lives and 1,338 as a result of IS actions.

But some experts say Turkey largely has itself to blame for this outcome. Turkey has long been accused of leniency if not outright collusion with IS, which grew stronger as a direct result of its lax border policies that let armed rebels of all stripes to go in and out of neighboring Syria in the hope that they would overthrow the country’s President Bashar al-Assad.

The second reason, which continues to resonate, is that the jihadis have targeted the Syrian Kurdish People’s Protection Units (YPG). Turkey insists that group poses a threat to its national security, even though it is the United States’ premier partner in the fight against IS. The YPG has never unilaterally engaged in hostile actions against Turkey. Turkish officials cite its close ties to the PKK as proof of the YPG's culpability.

The deadliest IS operations inside the country targeted pro-PKK Kurds, and the official reaction was a deafening silence. The lack of response fed accusations that Turkey was egging IS on against the Kurds, most notably when the group laid siege to the Syrian Kurdish border town of Kobani in 2014. In public remarks that provoked riots in the mainly Kurdish southeast region, Turkey’s President Recep Tayyip Erdogan almost seemed to relish its impending fall. But Kobani did not fall. The United States rode to the Kurds' rescue with a wave of lethal airstrikes against the jihadis, planting the seeds of their now flourishing military alliance against IS.

Aaron Stein, a senior fellow at the Atlantic Council who has studied IS networks in Turkey, explained in a report published this week how the US partnership with the Syrian Kurds was birthed: largely thanks to Turkish obduracy in the face of coalition appeals for help. Turkey did not open the Incirlik Air Base to coalition missions against IS until June 2015. In a separate report that came out in October, Stein documented how IS organized and recruited inside Turkey. “From 2012 to 2015,” he wrote, "Turkish recruiters were relatively open in their activities, attracting recruits from different social backgrounds. They lived in the neighborhoods where they recruited and were well known in Turkey’s Salafi community."

Stein agrees that Turkey is now doing a lot more to combat IS. He told Al-Monitor, “I think the threat to Turkey has decreased somewhat now that IS has lost control over the border. In combination, the police forces are continuing to carry out raids and did roll up the dangerous network that was behind most of the attacks.” Stein cautioned, however, “IS still retains assets in Turkey and continues to threaten Turkish targets.” He concluded, “No security service is perfect and the list of soft targets is long.”