As transnational networks of the Islamic State come under increasing pressure in Iraq and Syria, they are likely to shift to Turkey, while Ankara still gives priority to the Kurdistan Workers Party. 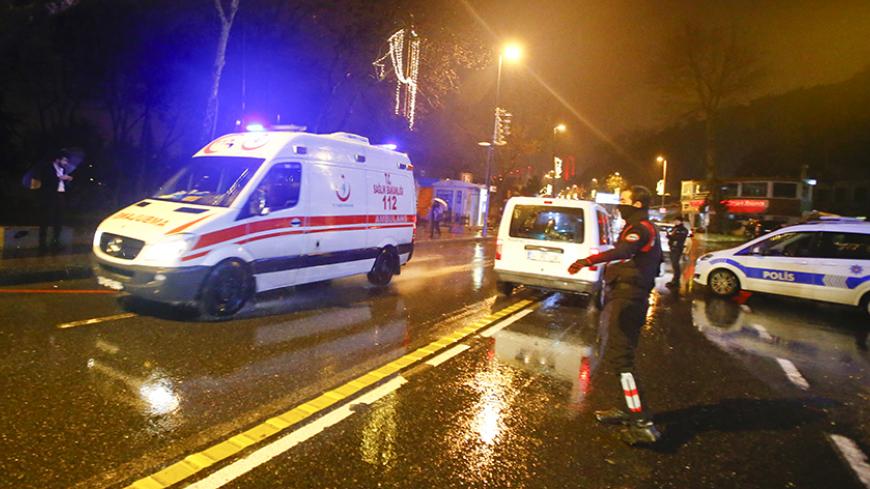 An ambulance arrives near a nightclub where a gun attack took place during a New Year's party in Istanbul, Jan. 1, 2017. - REUTERS/Osman Orsal

As 2016 was ending, millions of Turks were hoping that the struggles against the Kurdistan Workers Party (PKK), the Islamic State (IS) and armed leftist organizations would be over and 2017 would be less violent. But an attack by an IS militant in the first two hours of the new year at Reina, a popular, highbrow nightclub on the Bosporus, ruined those hopes.

The attacker, who targeted about 600 revelers, including the families of rich Arabs, first used his AK-47 to kill a 20-year-old policeman at the door and a security guard and entered the club. He dazed the crowd by hurling flash-bang grenades and then calmly fired about 180 armor-piercing bullets. In this six-minute ordeal, the attacker, most likely a Central Asian man, according to the authorities, killed 39 people and wounded 68 others before he found his way out of the club. He took a taxi to Zeytinburnu, where mostly Uighur Turks and other Central Asians live, and disappeared.

The attacker is still at large despite a massive, nationwide manhunt. Security forces say he is still in Turkey, but some claim he has escaped to Syria. Tweets have appeared saying he is already in Raqqa, Syria, where he was reportedly received by cheering crowds.

This attack had three "firsts" that we had not seen in eight previous IS attacks in Turkey:

The Reina attack also revealed an important reality: the inability of Turkish journalists, security experts and academics to comprehend IS. The media coverage, news reports and comments after the attack, and wildly divergent speculation as to who was behind it, expose that fatal incapacity.

The Turkish media had three basic ideas about who was behind the attack:

All the confusion signals the lack of adequate capacity to fully assess the IS threat in Turkey. In Turkey, many still think IS is a simple proxy outfit without its own brains, strategy and ideology.

Following is a balance sheet of Turkey’s combat against terror in 2016.

Turkish security forces carried out about 37,000 anti-terror operations, 31,000 of them in rural areas under gendarmerie jurisdiction and 6,000 in police-controlled urban areas. In these operations, about 21,000 PKK and IS militants were neutralized (those who were killed, captured or wounded, or who surrendered). Some 17,000 (81%) were from the PKK, 3,000 (14%) were from IS and about 1,000 (5%) were from radical leftist organizations.

According to information Al-Monitor obtained from security sources, of 25 major terror attacks, 17 (68%) were carried out by the PKK and eight (32%) by IS. The PKK in its operations generally targeted police and military forces in the country's southeast, while IS operations were in big cities such as Istanbul and Gaziantep without discriminating between targets. In Istanbul most attacks were at locations where foreign civilians congregate, such as Sultanahmet, Taksim Square and Ataturk Airport. The bloodiest IS attack took place on Aug. 21, 2016, at a street wedding in Gaziantep where 56 people, mostly women and children, were killed.

In 2016, Turkish security services did outstanding work in suppressing local extremist Salafi networks. But as we first saw at the Ataturk Airport attack and now at Reina, it appears certain foreign IS militants — those hailing from the Uighur region, Central Asia and Russia, who are finding it difficult to survive in Iraq and Syria — have shifted their network operations to Turkey. Naturally, these international networks, with their growing effectiveness and local support bases among immigrants, are not as easy to deal with as the Turkish networks.

Something else of importance can be gleaned from the 2016 balance sheet as well. Comparing the numbers of PKK and IS militants neutralized, we see that Turkey has given priority to the PKK. The question now is whether the Reina attack will compel Turkey to refocus its priority.

From the statements of senior officials after the Reina attack, we do not see such an inclination. In Ankara’s strategic mindset, the PKK is still the primary threat. Ankara is obsessed with preventing the PKK in Turkey, and its Syrian offshoot, the Kurdish nationalist Democratic Union Party, from achieving further gains. Turkish officials are also hoping that with the support of Russia and perhaps the incoming US president, all the gains the Kurds have made will be wiped out.