Turkey has substantially increased operations against Salafi-jihadi groups in 2017, but Ankara’s real problem is deciding whether to keep them under control or eradicate them. 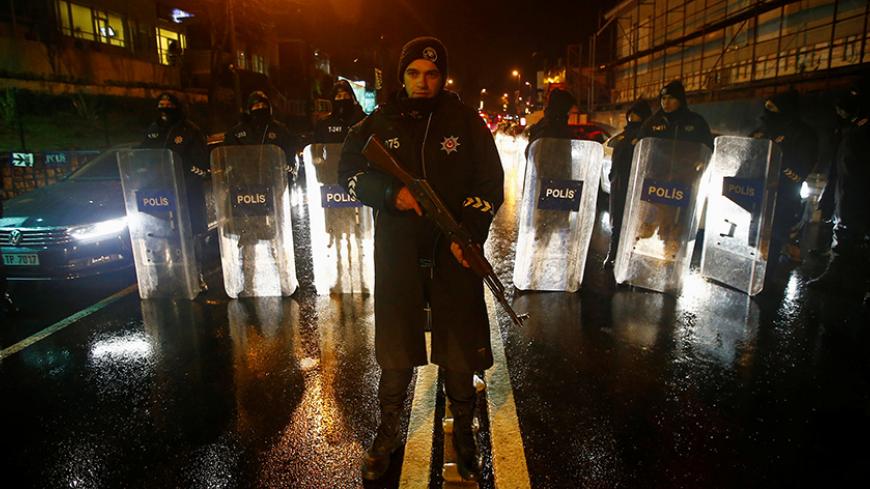 Turkish security forces in 2016 detained 2,936 people on charges of being violent Salafi jihadis. So far this year, the pace of security operations against Salafi networks is much faster.

On Feb. 5-6, in 29 cities including Ankara and Istanbul and especially in provinces close to the Syrian border, 820 people were detained on charges of being Islamic State (IS) militants or sympathizers. With this roundup, the number of accused extremist Salafists detained in the first 40 days of 2017 is now about 1,400 — almost half of the total detained in all of 2016. Among the detainees are many illegal Syrian, Central Asian and Uighur immigrants.

What's behind this unusual pace of Turkish security forces targeting violent Salafi networks in 2017, after they truncated local networks of Salafists made up of Turkish nationals in 2016?

The main reason is the political climate in Turkey, which is preparing for a constitutional amendment referendum in April that would greatly expand the president's power. The Justice and Development Party (AKP) government is very much aware of the shock effect of the Istanbul nightclub attack in the first hours of the new year. That attack heightened Turkish people's fear of IS and what it can do. The government was harshly criticized for the country’s intelligence and security flaws. IS-initiated, extreme Salafi violence on the eve of the referendum would further frighten the public and expose the government's weaknesses, probably boosting the "no" votes.

On the other hand, the number of people voting yes — in favor of expanding the president's power — could get a lift if there were a new Kurdistan Workers Party (PKK) attack, like the one Dec. 11 in Istanbul that killed 44 people, most of them police, and the Kayseri bus bombing Dec. 14 that killed 13 soldiers going on leave. The AKP government is able to couch these attacks as PKK actions, which makes them much easier to sell to the public.

This could explain why the government prioritized its struggle against extreme Salafi networks in the early weeks of 2017.

But at the core of this struggle is a major dilemma for Ankara: Should it eradicate the Salafi-jihadi movement, or learn to live with it?

In Turkey, we note three types of extreme Salafi-jihadi networks with different levels of motivations and inclination for violence:

Ankara’s basic dilemma is how to simultaneously eradicate the operational capacity of the first type while keeping the second type under control and supporting the third type.

To cope with such a diversified, heavy load will not be easy. Here we have to remember a bitter truth voiced by the perpetrator of the nightclub attack, Abdulkadir Masharipov.

Security sources told Al-Monitor that Masharipov admitted having briefly joined a moderate group. Ankara’s most difficult challenge in overcoming the jihadi movement in Syria is that there are no changing loyalties at the level of notables and leaders, but there is a constant movement of foot soldiers changing their affiliations. A careful study of the backgrounds of Salafi foot soldiers shows that they — especially those with Central Asian, Uighur and Russian backgrounds — have been in contact with many IS, Jabhat Fatah al-Sham and moderate groups. This makes tracking them down and keeping an eye on them particularly difficult.

For example, how can Ankara really trust a Central Asian or Uighur militant now serving with the Sultan Murad Brigade alongside Turkish soldiers in Syria, but who earlier had served with groups affiliated with Jabhat Fatah al-Sham and even IS? Could IS convince these "moderate militants," who have easy access to Turkey, to carry out terror acts there?

Ankara is obviously aware of these critical questions and is taking its struggle against violent Salafi groups more seriously in 2017, but so far without being able to eradicate the jihadi movement in Syria or managing to live with it.

At the risk of repeating myself, Ankara’s final decision on this will be determined by the escalating internal strife among Salafi-jihadi groups in Syria, by the Astana peace process and above all, by whether the Trump administration will consider the moderate groups that are helping Turkey in Operation Euphrates Shield friends or terrorists.