'Devotees of Death' headed for Turkey

Turkey offers the ideal destination for foreign terrorist fighters to blend in after being forced out of Syria and Iraq. 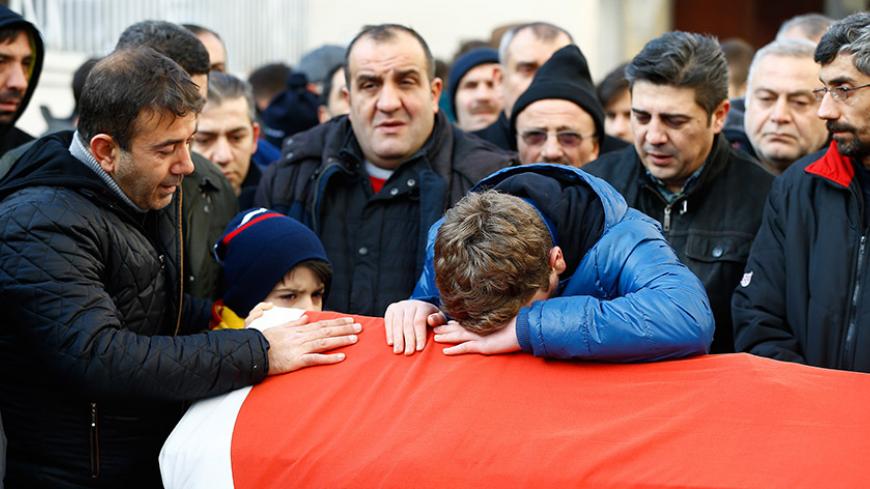 Relatives mourn at the funeral of Ayhan Arik, a victim of a New Year's Eve attack by a gunman on the Reina nightclub, in Istanbul, Jan. 1, 2017. - REUTERS/Osman Orsal

The Reina nightclub attack in Istanbul in the first hours of the new year led to a flurry of speculation on the identity of the attacker, who managed to escape and is still on the run.

The alleged attacker, who killed 39 people and wounded 68, initially was identified as a Uighur Turk and then as Kirghiz. The latest reports from security sources, however, identified him as an Uzbek national of Tajik origin named Abdulkadir Masharipov who uses the Islamic State (IS) alias Abu Mohammed Khorasani.

Masharipov did not have a residence permit and was not registered in the compulsory address notification system, but he has been living on and off in Turkey since 2011. Turkish security services trying to track him down said he could still be in Turkey, or he might have escaped to the Greek islands in the Aegean sea or gone back to Syria. Naturally, investigations are focusing on his connections in Turkey, his movements since 2011 and how long he stayed in countries abroad.

As an analyst monitoring IS activities and armed operations since the first one in Turkey — at Nigde on March 20, 2014 — I have noticed an unexpected development. The Reina attack marks the first time an intense debate has raged through Turkish public opinion about the identity of an attacker. There are two reasons: First, the nightclub attack triggered disagreements about lifestyles in Turkey. Second, it coincided with the peak of President Recep Tayyip Erdogan's efforts to create a "grand national front" by consolidating the Justice and Development Party base with nationalist segments in Turkey.

Following successful operations by Turkish security forces to eradicate IS-directed local networks in places like Adiyaman, Diyarbakir and Bingol, a June 28 attack at Ataturk Airport showed us that IS has resorted to mobilizing foreign terrorist fighters (FTF) from Central Asia and China’s Xinjiang Uighur region, who can be very difficult to track and apprehend.

Now we have a "ghost" FTF called Masharipov on our hands and we know nothing about his fate. Reports around this ghost have put the subject of these FTFs on the public agenda. People are worried that these illegals, totaling tens of thousands, have created a social habitat that allows them to easily conceal themselves, plan and carry out operations, and disappear.

There are three types of Central Asian and Uighur refugees in Turkey. First are those who entered Turkey legally with their passports, obtained residence permits and registered with the address monitoring system.

The second are the extremely mobile ones who entered Turkey legally, but did not obtain residence permits and did not register and are therefore without a permanent residence. They travel with ease on buses anywhere in Turkey. The police are now devising a system to control their movements.

Finally, there are those who entered Turkey illegally, do not have residence permits and are not registered. This is the most dangerous category, and it alone may have tens of thousands of members. We have seen how Masharipov, an FTF, was able to move easily between Turkey and Syria without any documents.

According to reports, as New Year's Eve celebrations were taking place, Masharipov got in a taxi at around 12:30 a.m. in Istanbul’s Zeytinburnu district. Zeytinburnu is renowned for its leather and textile workshops and has a registered population of 300,000, but it now hosts far more than 400,000 people because of refugees, particularly from Central Asia and Xinjiang. After the attack at Reina, at about 2 a.m., he returned to Zeytinburnu by taxi. It is interesting to note that last year at a Uighur nongovernmental organization gathering, Masharipov voiced IS propaganda and spoke against Erdogan. He was kicked out. So Masharipov is known in Zeytinburnu.

After collecting available information, Al-Monitor went to Zeytinburnu to track down Masharipov. The first thing we were told was how the police had uncovered Masharipov's Zeytinburnu connections and had raided many addresses in the district and detained 17 people.

S.D., a Uighur Turk who runs a restaurant in Zeytinburnu, spoke to Al-Monitor. He said police had shown him a photo of the attacker and asked if he knew him. Seven people working in his restaurant were detained. He added, “When we escaped from the torment in East Turkistan, the only country that opened its doors to us was Turkey. We will be terribly saddened if the attacker turns out to be a Uighur Turk. I condemn those who hurt this country.”

Elected local leaders (mukhtars) who are responsible for the back streets of Nuri Pasa and Telsiz neighborhoods, admit they can't keep track of the highly mobile refugees. One mukhtar who spoke to Al-Monitor on condition of anonymity said, “The state has been able to bring daily and weekly accommodation rentals under control. But these illegal refugees adapt very quickly to wherever they go. They only deal with people they know. For example, one of them rents a large shop. He then divides it into rooms in one day and turns it into a motel shared by five to six families. They make good money from this.”

Another man told us about the address registration system: “Some refugees with enough money easily buy a flat or a shop and thus obtain a residence permit. But they don’t want to register their permanent addresses because most of them are people with criminal and legal problems. Then it becomes a problem to determine who was involved in what crime, when and how.”

M.T., a leather merchant in East Turkistan whose father immigrated to Turkey in 1952, also spoke to Al-Monitor. “New refugees rent plenty of houses and shops. There is a restaurant or cafe on every corner, although they have no customers. Where do they get that money? How do they survive?” he said.

T.C., who has been living in Turkey for 30 years, said, “There has been a major transformation in Zeytinburnu over the last three years. The population is changing, and there is also intensive urban transformation. There are plenty of illegal workers, given the preponderance of leather and textile workshops. We don’t know who comes here anymore. There are 10 flats in my building. At least one of [the tenants] moves out every couple of months.”

The conclusion is that Zeytinburnu has become a chaotic habitat where FTFs easily come and find cover among tens of thousands of illegal refugee families, where residents are highly mobile and cheap labor is available. Address registration is still not fully operational and planned "neighborhood watches" have not been set up.

Another major problem on the horizon is that such neighborhoods are becoming attractive to Central Asian and Uighur FTFs with their families, since they are losing their options to live in Iraq and Syria.

According to a report issued by the International Crisis Group in January 2015, there are 2,000- 4,000 FTFs from Central Asian countries who have joined IS.

Since the beginning of 2014, these FTFs have settled mainly in the Syrian cities of Jarablus, Raqqa and Idlib to join jihadi groups. These fighters who move around with their families are called "Devotees of Death" by Syrians and Iraqis in IS. This may also explain why these poor and poorly educated FTFs, who have no means of returning to their countries, are now the FTFs carrying out most suicide operations.

Hilmi Demir, a professor at Hitit University and a leading expert on Salafism in Central Asia, told Al-Monitor that as of 2017, the main threat facing Turkey is not local networks, but IS networks made up of Central Asian and Uighur FTFs.

He said, "These FTFs, who used to go to Syria and Iraq to join IS and extreme Salafist groups like [Jabhat Fatah al-Sham], are finding it increasingly difficult to survive in Iraq and Syria. Moreover, Russia, because of its major military presence in Syria, is the worst enemy of FTFs from Central Asia, Russian republics and the Uighur region. I am sure Russia will never allow them to return to Central Asia and the Russian environment. They are badly cornered.”

Demir added, “I detect an extremely dangerous operational strategy. IS follows Turkish society very closely and identifies its fault lines. Attacks carried out by Central Asians could endanger the domestic cohesion in the country and our relations with Russia.”

Russians are perfectly aware that within two to three years, this threat could spill over to Central Asia, Uighur regions and Russia.

In the meantime, though, as we see from Istanbul’s Zeytinburnu example, Turkey offers the perfect opportunity for these FTFs to settle down and disappear.

Unfortunately, the worst mistake Turkey makes in struggling against extremist Salafist radicalism is still perceiving it as purely a security issue and thinking it can be tackled with military measures, instead of developing an integrated and comprehensive strategy to cope with IS and extremist Salafism.