How the Islamic State is exploiting Asian unrest to recruit fighters

Communication, trust and cooperation among governments and communities are required to prevent the spread of violent extremism and curb the flow of Islamic State recruits from Asia to the Middle East. 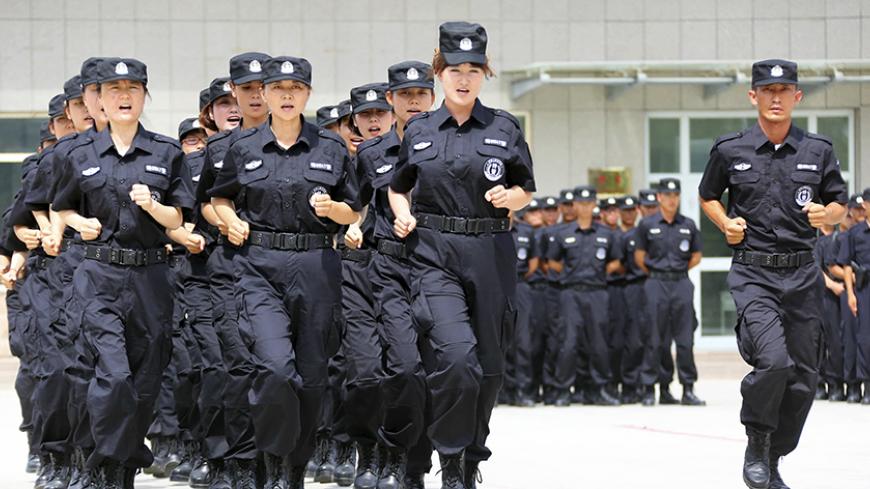 Policewomen from the Special Weapons and Tactics team run in formation during a graduation performance after training as members of an anti-terrorist patrol team, in Hami, Xinjiang Uighur Autonomous Region, June 29, 2014. - REUTERS

Conflicts in Iraq and Syria have produced a significant number of extremists in Central Asia and Xinjiang, providing prime recruiting targets for the Islamic State (IS) and other terrorist groups.

Intelligence sources in Ankara estimate at least 1,500 recruits from Central Asia (Uzbekistan, Kyrgyzstan, Kazakhstan, Tajikistan and Turkmenistan) and Xinjiang (a Uighur autonomous region of northwest China) are already fighting for IS in Syria and Iraq.

“There are [also] hundreds of Central Asians and Uighurs fighting in groups other than IS, such as the Jabhat al-Nusra coalition in Syria,” said Jacob Zenn of the Washington-based Jamestown Foundation, an institute for research and analysis. Zenn is a senior research fellow specializing in Xinjiang.

Peter Knoope, an associate fellow with the International Center for Counter-Terrorism of The Hague, draws a grim picture. He told Al-Monitor that all the elements needed for the IS recruitment process are found in the region, including young people experiencing “a lack of perspective, unfulfilled ambitions and lack of religious knowledge.”

“All these ingredients give rise to a segment of vulnerable youth within the population that are easily identified by professional recruiters,” he said. Recruits who return from Iraq and Syria “may identify with their former leaders and comrades to the extent that they may target people in their native region.”

Knoope then alarmingly concludes, “The question is not ‘if’ but rather ‘when’ violent action will hit the Central Asian region.”

Zenn notes that extremism in Central Asia so far has been mostly nonviolent in the past few years. He underlines, however, that Knoope’s prediction has already become a reality in Xinjiang, as violence has afflicted that area for a while.

“In [Xinjiang], which is home to more than 10 million Uighurs, many attacks are not reported in the media. But [even] if you look at only reported attacks, well over several hundred people have been killed in attacks with mobs using daggers and even individuals using car and suitcase bombings in public plazas and train stations. While originally the agitation in Xinjiang was ethno-nationalist, I think it would be fair to say that, like the Chechen case, now the ideology is mostly moving toward the Salafist jihadist trend,” Zenn, who recently returned to Xinjiang, told Al-Monitor.

Zenn also said, “There has been a rise in attacks in Xinjiang in terms of numbers of participants involved and sophistication. Many attacks go unreported, in part because China does not want to attract media attention and hype up these attacks. But also there have been attacks in Kunming, Beijing’s Tiananmen Square and other parts of eastern China, so this can no longer be treated as an ‘only in Xinjiang’ conflict.”

He said jihadism will become more prevalent, given the large number of Uighurs in Syria and Turkey who are determined to create “East Turkistan” or — for those in IS — ‘Wilayat Khurasan,’ a broad region including parts of Afghanistan and Pakistan that IS has claimed as its own province.

“IS recognizes that most Uighurs in Syria are with Jabhat al-Nusra, and IS has begun a propaganda program to encourage Uighurs to join IS,” Zenn added. “This will help IS in its own rivalry with Jabhat al-Nusra, because every fighter who changes sides is a propaganda tool as well as a plus-minus win for IS. IS can also take advantage of the many Uighurs in Turkey who may be considering gaining militant experience in Syria to prepare one day to return to Xinjiang to fight and recruit” for IS.

In another dangerous trend, Central Asian and Uighur extremists — who were fighting individually in the past — have been cooperating to form new groups, develop new networks and gain sophistication in planning and conducting attacks. Videos from the Turkistan Islamic Party (TIP), for instance, which is mostly made up of Uighur (Turkistan) leaders and militants, show they are fighting alongside Jabhat al-Nusra and Uzbek-led brigades and have been seen in major battles in Idlib and now Homs. The TIP praises attacks in China, such as the assassination of Imam Juma Tahir of Kashgar, and glorifies its destruction of churches in Syria.

Despite being immersed in Syria, it is likely the TIP and its broad networks of traffickers, sponsors and recruiters still seek to gain independence for Xinjiang and create some form of Islamic state not only there, but in all of Central Asia. For Zenn, “They also view the Chinese as ‘kuffar,’ [infidels] who deserve to be killed. Perhaps the TIP will move to attacking Chinese abroad if they find it difficult to gain access in China.”

Although there are some governmental and societal efforts to prevent the flow of violent extremists to Syria, Iraq and Afghanistan and to diminish nonviolent extremism, those efforts are disjointed, and extremism in Central Asia and Xinjiang continues to rise.

According to Erlan Karin, director of the Kazakhstan Institute for Strategic Studies, the prime reason for rising extremism both in violent and nonviolent forms is the absence of cooperation and coordination in the region at the governmental level. “Stable counterterror consciousness first should be raised among the decision-makers of the Central Asian countries and China to struggle effectively against violent extremism in the region,” he told Al-Monitor.

To fill that gap and reach a common understanding in the struggle, leading scholars and experts of Central Asian countries came together Sept. 2-4 in Astana, Kazakhstan, at a workshop titled “Violent Extremism in Central Asia and Uighur Province of China: Indicators, Trends and Possible Responses.”

“This is surely a good step, but not enough,” Karin says.

For Knoope, government cooperation and coordination are necessary but not sufficient to effectively prevent violent extremism. Knoope underlines that societal responses to violent extremism in the region are equally important. He notes that the first step in prevention is to build connections.

“Governments need to connect to communities and reconcile human security with state security,” he said. According to Knoope, people must understand that human and state security are different, but not contradictory. “Trust-building is a condition and an outcome both at the governmental and societal levels,” Knoope said.

First, these cases show us that IS affects countries everywhere with its global agenda. IS latches on to and exploits the grievances common at local levels in many Muslim-majority countries. The organization certainly has the potential to be a game changer. Second, the changes taking place in Afghanistan may lead to spillover effects in the southern part of the region. Last but not least are the developments in western China, which could impact Central Asia in a number of ways that depend on the efficiency of China's countermeasures.

In conclusion, the cases of Central Asia and Xinjiang explicitly show us that to prevent violent extremism, countries in certain regions need connections, trust-building and cooperation at both the government-to-government and government-to-society levels. Leaders need to know what is going on and what is being said both in the cities and rural areas, and they should work with civic groups that are aware of what is happening among their communities. It is also useful to coordinate regionally and internationally so that the countries can learn about new trends in violent extremism and block it in advance, before it’s too late.