China’s oppressive policies and the increasing influence of extreme Salafist currents are inflating radicalization among the Uighur population. 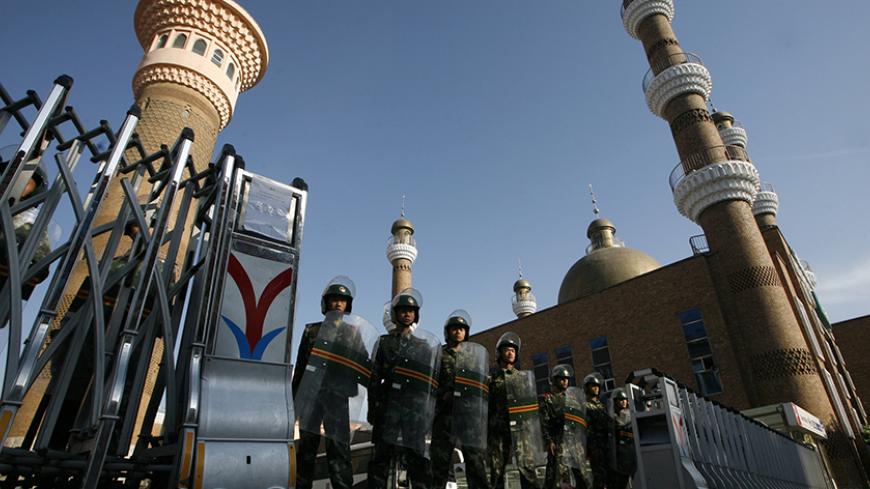 Chinese paramilitary police in riot gear guard the entrance of the Dong Kuruk Bridge mosque in the center of the city of Urumqi in China's Xinjiang Uighur Autonomous Region, July 10, 2009. - REUTERS/David Gray

Not only the West fears the return of their citizens after they have joined the jihadists in Syria and Iraq. We sometimes read about Russian concerns over the significant role Chechens play in the Islamic State (IS) and Jabhat al-Nusra. But because of restrictions by the Chinese government on the media, we rarely hear about the turmoil closely linked to the jihadist war in Iraq and Syria that takes place in the Xinjiang Uighur Autonomous Region in northwest China.

The name of the place where the Uighurs live is disputed. The Chinese call the region Xinjiang, which means “newly recovered lands.” However, according to the Uighurs of Turkic origin, the area where nomadic Turks first settled is called East Turkistan. In recent years, there has been constantly increasing tension in Xinjiang/East Turkistan, which has gone largely unnoticed because of media restrictions in China. Interestingly, the IS flames in Syria and Iraq are felt thousands of miles away in Xingjian/East Turkistan.

For the Uighurs, Islam is an important part of their lives and identity. Huseyin Rasit Yilmaz of the Ankara-based think tank Economic Policy Research Foundation of Turkey told Al-Monitor that the Uighurs’ interpretation of Islam is based on “the school of Imam Maturidi," which is identified as the most moderate and tolerant of all Islamic schools of thought.

Maturidi was an Islamic scholar who lived in the ninth century in Samarqand and is considered by the Uighurs as their godfather. Yilmaz, known for his expertise on the Uighurs, said that in recent years because of China’s oppression and increasingly effective Salafism in the region, the Uighurs are deviating from Maturidi’s peaceful and tolerant school of thought and adopting radical trends.

According to the Chinese authorities, these radical trends are considered terrorism. Chinese officials claim street incidents in the last two months, which has killed more than 200 people, are the work of Islamist terrorists who want to cut Xinjiang from China to achieve ethnic separatism.

A recent surge in the number of Uighurs traveling to Syria and Iraq to join jihad has contributed to China considering the situation a question of terror.

The Chinese government's strong reaction to street demonstrations and determination to combat terrorism signal an intention to reinforce military measures in Xinjiang/East Turkistan. In recent days, there has been a significant increase in reports of Chinese security forces using excessive force against civilian demonstrators, of executing demonstrators in the streets without trial and of opening fire randomly on demonstrators.

Reports have started emerging in the international media of China closing down mosques in the region on security grounds, banning women from wearing the headscarf and men from growing a beard.

Seyit Tumturk, the vice president of the World Uyghur Congress, told Al-Monitor: “China is consciously hardening its policies against Uighurs. Especially the harsh crackdown on religious values that the Uighurs respect has nothing to do with combating terror. It is ethnic and cultural genocide on pretext of combating terror …” Tumturk charges that what China wants in Xinjiang/East Turkistan is not only to eliminate Salafist trends but to launch a witch hunt to eradicate everything Islamic and assimilate the Uighurs.

How do the Uighurs respond to the Chinese military actions? Yilmaz said the Uighurs who manage are leaving, claiming that every month hundreds of Uighurs are fleeing without passports.

Yilmaz added, “Some of the Uighurs who flee hope to go to other countries, mostly Turkey, where they can enjoy religious and cultural freedom. There are also hundreds of young Uighurs in the age group of 15-35 who are influenced by Salafist ideology and who do everything conceivable to go to Syria and Iraq to join the armed groups.”

Another report that gives credence to Yilmaz’s remarks is the story of more than 300 Uighurs who are detained in rough conditions in a camp in Thailand on charges of illegal entry into that country.

The words of an Uighur fighter in Syria helps further explain the situation: “Living conditions in East Turkistan are more difficult and suffocating than a war zone. When we had restrictions on speaking our own language in our land, when we couldn’t go to mosques, while our daughters are compelled to work in foreign lands far away from home, when our intelligentsia and politicians who express their opinions are tortured, we had no choice but to immigrate to Syria to be with our brothers here and live freely. Moreover, while fighting the [Bashar al-] Assad regime, we are also fighting China, which is his key supporter.”

It's not only young unmarried Uighurs who want to join the radical groups. An Uighur man, trying to survive the winter in Kayseri in central Anatolia in Turkey with his wife and two children and with the help of his compatriots, spoke to Al-Monitor on condition of anonymity. He said he had gone to Raqqa under IS control, but then realized what he was told was drastically different from the reality and so he fled back to Turkey with his family.

The Uighurs' status is followed closely in Turkey both by nationalists and Islamists, and is often the subject of harsh debates.

Is the approach of the Justice and Development Party (AKP) government to the Uighur question based on emotion or strategy?

The Uighur issue provides substantial ammunition for the AKP’s ever increasing nationalist narratives. It's not unusual for the pro-government media to call for the AKP decision makers not to keep silent about the Uighur issue and to extend assistance to them.

But in the AKP there are also those who do not agree. They say Turkey has to adopt a strategic approach to the Uighur question so as not to endanger the close relations achieved with China. For columnist Ergun Diler of the pro-government daily Takvim, the Uighur issue is an instrument used by the United States that does not want to cultivate relations between China and Turkey. The United States must not be allowed to meddle in the Uighur issue and damage Turkey’s strategic relations with China.

It must be because of this confusion that the AKP government is persistently rejecting a Turkish visa to the president of the World Uyghur Congress, Rabia Kadir, who lives in the United States and is called “the mother of Uighurs."

In an interview with daily Hurriyet Dec. 22, Kadir said the Uighur region is now subjected to intensive Salafist propaganda and there has been no reaction to illegal human trafficking networks to smuggle Uighurs to Syria and Iraq via Turkey. “Most of these traffickers are now in Turkey," she said. "We know them all. There are at least 10 of them in Turkey today. Altough, we reported them to the Turkish government, they are still freely moving around in Turkey. We are surprised why the Turkish government is not apprehending these smugglers.”

Kadir's remarks angered AKP officials and Turkey’s Islamic circles. The Islamist press followed up with comments labeling Kadir "an infidel" and ”an American agent for sale."

Despite a lack of reliable information, the oppressive and security-oriented approach of China and the extremist Salafist trends clearly are on a collision course. The result: the increasing number of radicalized Uighurs, which naturally means it's not only the West that should fear the return home of the armed Salafists who have been fighting in Syria and Iraq.

by Murielle KASPRZAK and Joseph SCHMID | AFP | May 26, 2022
END_OF_DOCUMENT_TOKEN_TO_BE_REPLACED