Ankara’s angry outburst over the alleged death of a renowned Uighur folk musician while in Chinese detention has exposed the weakness of Turkey’s claims of defending the minority and its dire need to maintain good relations with Beijing. 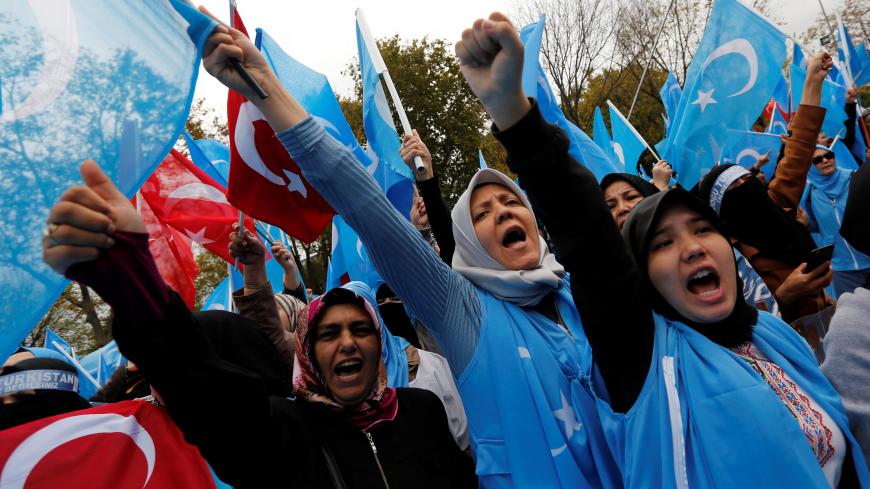 Demonstrators wave Turkish and East Turkestan flags as they shout slogans during a protest against China, Istanbul, Nov. 6, 2018. - REUTERS/Murad Sezer

Turkey’s scorching condemnation of China on Feb. 9 over the treatment of the Turkic Uighur minority in the Xinjiang Uighur Autonomous Region caught many, including Uighur activists in Turkey, by surprise. Few expected such an outburst after Ankara's prolonged period of silence despite China’s well-documented and ongoing repressive policies against the Uighurs.

Ankara’s statement pleased many in the expatriate Uighur community, giving them hope that it signals the start of a new and more dynamic policy regarding their cause. Others are not so sure, however, due to past experience, broken promises and Turkey’s openly expressed and actively pursued desire to develop ties with China as a counterbalance to its deteriorating ties with the West.

In addition, questions have been raised about the timing of Ankara’s harsh statement and the true reasons behind it, given that China’s treatment of the Uighurs is nothing new. The obvious catalyst for the unexpectedly harsh statement by Foreign Ministry spokesman Hami Aksoy was reports circulating on social media that the Uighur folk musician Abdurehim Heyit had died in detention.

Expressing sorrow over Heyit’s death, Aksoy said it was no longer a secret that more than 1 million Uighur’s were being subjected to torture and political brainwashing in Chinese internment camps and prisons. Characterizing this as a “great shame for humanity,” Aksoy called on the international community and the UN secretary-general “to take effective measures in order to bring to an end this human tragedy in Xinjiang.”

Beijing responded immediately by uploading a video of Heyit showing him to be alive. In it, Heyit states the date as Feb. 10 and says he is in good health and has not been abused during his investigation for allegedly violating the law.

The Chinese Embassy in Ankara responded officially to Aksoy on Feb. 11 with a statement calling the allegations regarding Heyit’s death and the treatment of Uighurs “groundless and distorted.” It also said that the “internment camps” referred to by Aksoy were “training centers” and asserted that Turkish journalists had visited and inspected them as recently as January.

Many Uighur activists argue that the video of Heyit could easily have been doctored because China has the technology to do so. Nevertheless, the video represents an embarrassment for Ankara, which appears now to have jumped the gun, as noted by Murat Bardakci, a popular columnist for the daily Haberturk.

Bardakci called Aksoy’s statement on Heyit’s alleged death a “major diplomatic gaffe, made hastily on the basis of hearsay over social media, and without any effort to verify the facts.” He further stated, “To stand up to China over its tormenting and murder of the Uighurs … with statements that can be instantly rebutted does nothing but weaken our hand and make the other side question our seriousness.”

Ankara noticeably toned down its rhetoric after the release of the Heyit video, and at the time of writing, President Recep Tayyip Erdogan, who in the past has presented himself as a vocal champion of the Uighurs, had not spoken on the matter.

Addressing the topic during a Feb. 11 press conference in Ankara, government spokesman Omer Celik chose his words carefully to avoid escalating the situation. Responding to a question about Heyit, Celik said, “If the Chinese authorities employed a more transparent approach to claims regarding missing Uighurs, this would help to reduce tensions for everyone.”

Celik also asserted “Ankara’s respect for China’s territorial integrity” and for “Beijing’s need to provide for its security.” He was clearly trying to quash any suggestion that Turkey might be encouraging Uighur separatism or supporting radical groups in Xinjiang.

It is such vacillations in Ankara’s tone that leads Uighurs to doubt its sincerity in claiming to defend their cause. Some Uighur representatives in Turkey are not holding back from openly criticizing Erdogan and the government in this respect. The shared concern is that this latest and unexpected outburst against China may turn out to be a “one-shot affair” because it has more to do with Turkey's local elections in March than the plight of the Uighurs.

Ankara may have been holding back from hitting China in recent years, but the Uighur’s enjoy great support among religious and nationalist Turks. These groups frequently take to the streets to protest against China and have even mistakenly attacked Korean tourists in Istanbul, mistaking them for Chinese. Aware of this, after Aksoy’s statement China issued a travel warning to its citizens visiting Turkey.

Erdogan needs a strong turnout for his Justice and Development Party (AKP) in the March elections to further consolidate his hold on power. Many see Ankara’s latest attack on China as an attempt to please the AKP’s religious and nationalist bases.

Many Uighurs recall that Erdogan also lambasted China in 2009, while prime minister, deeming Beijing’s treatment of the Uighurs “tantamount to genocide.” He failed, however, to follow-up with a clear policy on behalf of the Uighurs. Instead, Ankara very quickly made clear​ that it had no intention of moving in that direction because it valued its ties with China.

In the meantime, China and Turkey worked hard to deepen bilateral ties. Their efforts culminated in a February 2012 visit to Turkey by Vice President Xi Jinping, later president, and a visit by Erdogan to China a few months later.

Erdogan paid another official visit to Beijing in 2015 and traveled again to China in September 2016 for the G20 summit and for the Belt and Road summit in May 2017. Erdogan's talks with President Xi Jinping during these visits bolstered the positive outlook for bilateral ties, especially in the economic arena, where cooperation is already worth tens of billions of dollars.

Ankara can ill afford to put such potential at risk given its current economic difficulties. As noted, Erdogan is also seeking powerful new political allies, including China, as he drifts away from the West.

In 2016, Erdogan declared his desire for Turkey to join the Shanghai Cooperation Organization, in which China plays a key role, alongside Russia. He signaled that Ankara would be prepared to dump its EU membership bid should that happen. Meanwhile, last December, AKP deputies blocked a motion tabled by the nationalist opposition for a parliamentary inquiry into the plight of Uighurs in China.

During a visit to Beijing in July 2018 Turkish Foreign Minister Mevlut Cavusoglu had told reporters that Ankara viewed threats to China’s security as threats to Turkey and would not allow “anti-China activity inside Turkey or territory controlled by Turkey.” He was trying to assuage China’s concerns regarding anti-Chinese activities by Uighurs in Turkey aimed at promoting independence for Xinjiang and also acknowledging the problem posed by the scores of Uighurs who traveled through Turkey to join Jabhat al-Nusra in Syria.

Despite the recent heated exchanges between Ankara and Beijing, the general expectation is that ties will return to the status quo ante in light of broader interests that neither side can afford to endanger.

Tugrul Keskin, an international relations professor at Shanghai University, does not expect Turkey’s harsh tone toward China to make much of a difference to the long-term relationship, even if mutual suspicions remain.

Nevertheless, Turkey is currently gripped by election fever, and there is no guarantee that the Uighur issue will not flare up again to be used as fodder in domestic politics. This could one again cloud Turkey’s ties with China and will require more deft diplomatic management by Ankara than thus far exhibited, especially if Turkey wants to help the Uighurs in earnest.

China in the Mideast
Ethnic/Religious Minorities