Turkey and China put their differences aside at a summit to expand trade and investment, but Beijing’s treatment of its Uighur minority and competition over foreign markets still trouble the relationship. 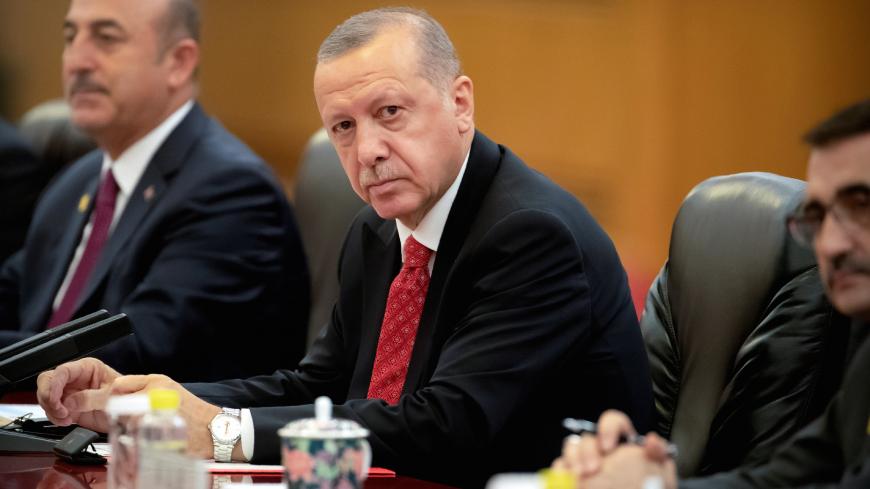 ISTANBUL — Stronger cooperation between Turkey and China will boost global stability, President Recep Tayyip Erdogan said on Tuesday during a visit to Beijing that comes as both nations’ relationships with the United States are tested over economic and diplomatic disputes.

Erdogan met Chinese President Xi Jinping following the G-20 summit in Japan, where the Turkish leader’s talks with US President Donald Trump failed to resolve a clash over Ankara’s purchase of Russian missiles that could incur painful US sanctions and has Washington worried its NATO partner is drifting away from the Western alliance.

"I believe that Turkey and China have great potential for strengthening cooperation," Erdogan said at the start of his meeting with Xi. "This visit to China happens during a period in which global peace and stability face trials. The strengthening of Turkey-China relations will provide large and diverse contributions to regional and global stability."

Turkey is part of China’s $1 trillion “Belt and Road” initiative, a massive infrastructure project involving some 70 countries in Europe, Africa and other parts of Asia that could reorient global trade toward the world’s second-largest economy. Turkey lies on the shortest route between China and Europe, wants to expand access to markets in the Middle East and Central Asia and stands to benefit from Chinese financing for transportation and energy projects.

A skeptical United States has described the project as a kind of debt trap: an effort by Beijing to hold the developing world in its sway through cheap loans.

Xi said China and Turkey should work to “uphold a multilateral world order with the United Nations at its core, a system based on international law,” in what some news reports described as a reference to its sparring with the United States over tariffs and technology.

Erdogan’s visit to China coincides with concerns among its traditional Western allies that it is realigning away from the West toward Russia and other powers. Erdogan has refused to back down from a plan to buy a Russian-made S-400 antiaircraft system that Washington says will harm NATO security.

The Turkish president said this week the Russian batteries will reach Turkish soil in 10 days, rebuffing a threat that the US Congress will punish his country economically by pinning his hopes on Trump’s intervention.

“Turkey sees that China is on the rise and that if the world order is changing, one of its leaders will be China,” said Ilter Turan, professor emeritus of political science at Bilgi University. “In the longer term, it likely sees China’s power as a balance against both the United States and Russia.”

China has lent Turkey a helping hand during recent trying economic times. Last July, a Chinese state bank loaned Turkey $3.6 billion when the lira plunged over a diplomatic dispute with the United States.

Erdogan published an op-ed in China’s Global Daily newspaper before his visit, saying the two nations share a “vision of the future” and that “Turkey is firmly committed to strengthening its cooperation with China in all areas.”

While the prospect of more Chinese investment as well as increased Chinese tourism is tantalizing for Turkey, the two sides “have certain points that are not in harmony, in which the two countries are in competition,” Turan told Al-Monitor. “For example, Turkish products may be more expensive, but they can reach European markets in smaller amounts far quicker.”

Turkish-Chinese relations have been overshadowed Ankara’s objections to Beijing’s treatment of its ethnic Uighur minority, which shares religious and linguistic links with the Turks.

“Turkish public opinion is very sensitive to the matter of the Uighur Turks, and Turkey has from time to time has expressed [criticism] that has displeased the Chinese,” Turan said.

More than a million Uighurs have been detained in camps where many are forced to renounce Islam, according to human rights groups. Chinese officials reject the charges, describing the camps as vocational training centers aimed at combating Islamic extremism.

The Chinese state media quoted Erdogan as saying people in Xinjiang “live happily.” A Turkish official in Erdogan’s office did not immediately respond when asked by a reporter for confirmation of the statement. Some reports said Uighur activists were disappointed he failed to publicly speak out on their behalf while in Beijing.

Turkey has been one of the few Muslim nations to condemn China’s policies against the Uighurs, who mainly live in western China’s Xinjiang province in what has been described as a police state. In February, the Turkish Foreign Ministry accused the Chinese government of subjecting a million Uighurs to “torture and political brainwashing” in internment camps.

Still, Turkish criticism of the Uighurs' plight has been relatively mild compared to its far more robust defence of Uighurs in the recent past. A decade ago, Erdogan accused Beijing of genocide when more than 150 Uighurs were killed in clashes with members of the ethnic Han majority in Xinjiang. In 2015, hundreds of Uighurs were resettled in Turkey after Ankara intervened to prevent their deportation from Thailand to China.

Erdogan’s more taciturn stance now is thrown into sharper relief by his support for other persecuted Muslims around the world, such as the Rohingya in Myanmar, as he positions himself as a global leader of Muslims.

Late last month, lawmakers from his ruling party voted against an opposition motion for an inquiry into the “systematic pressure” applied to China’s Uighurs. The government’s ultranationalist partners — who in the past were outspoken champions of ethnic Turkic communities outside of Turkey — abstained from the vote.

“The government has become extremely prudent on the Uighur issue. … We will continue to see Turkey take a positive stance toward China on this issue in the near term,” Yusuf Tuncer, a senior official in the pro-China Patriotic Party, told Sputnik ahead of Erdogan’s Beijing trip.

Al-Monitor columnist Metin Gurcan has written that Turkish officials are at odds over how to respond to China’s Uighur policies. One camp, wary of the West, argues that Turkey must nurture Turkish-China relations while religious conservatives want Erdogan to do more to help the victimized community.

By no means is Turkey alone in its deference to China on this issue. Officials in mostly Muslim nations from Malaysia to Pakistan to Saudi Arabia have not raised the issue. And in the West, governments may express outrage over the detentions, but have fallen far short of taking steps that would shift Chinese behavior.