Erdogan’s China woes: the vaccine and the Uighurs

Turkey’s reliance on China for a COVID-19 vaccine has stirred anxiety in nationalist and Islamist quarters that Ankara might give concessions on the Uighur issue in return. 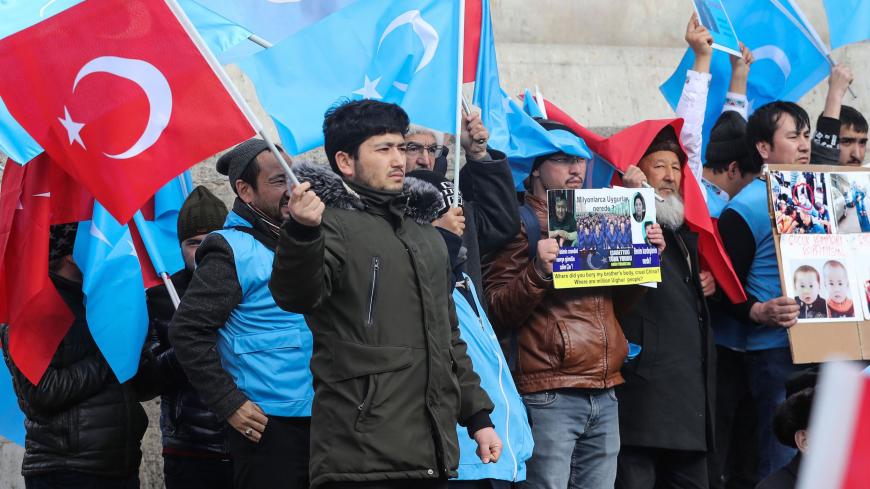 Uighurs living in Turkey stage a demonstration to commemorate the anniversary of the deadly ethnic unrests of 1997 in Gulja, China's far-western Xinjiang Uighur Autonomous Region, in Ankara on Feb. 5, 2020. - ADEM ALTAN/AFP via Getty Images

Turkish President Recep Tayyip Erdogan is facing accusations of bargaining with China on the extradition of Uighur dissidents in return for a COVID-19 vaccine — this on top of criticism that political and economic motives swayed his decision to go for a Chinese vaccine. The accusations were fueled by delays in the delivery of the first batch of vaccines, which coincided with China’s ratification of a 2017 bilateral extradition treaty in late December. The Turkish parliament, currently in recess, is reportedly likely to follow suit in February.

Opposition lawmakers have drawn a link between the vaccine delay and the ratification of the extradition treaty, with some charging that Ankara is under pressure to extradite certain Uighurs in return for the vaccine. The Uighurs have ethnic, linguistic and religious bonds with Turkey, where about 23,000 of them are estimated to have taken refuge.

Ankara had announced that gradual inoculation would start Dec. 11, but the vaccine was not delivered as scheduled. The first shipment arrived Dec. 30 after no less than three postponements, which fanned the controversy over the extradition treaty. The Uighur diaspora launched a vocal campaign against the Turkish parliament’s ratification of the accord, generating support from diverse political quarters. Foreign Minister Mevlut Cavusoglu denied any link between the vaccine and the Uighurs, stressing that Ankara had rejected Chinese extradition requests thus far and the treaty did not mean that Turkey “will hand the Uighurs over to China” down the road.

According to two Turkish sources in contact with Chinese officials, Turkey’s vaccine order does provide a convenient ground for Beijing to press for the ratification of the accord, but China’s strategic thinking goes well beyond the Uighurs. Since China is trying to take advantage of the vaccine to win over countries, it is unlikely to hamper the process by throwing in the Uighur issue, the sources believe. Hence, before moving to ratify the deal, China is likely to have received a positive signal from Turkey that it would follow suit.

For Turkish journalist Gokhun Gocmen, who works for state-owned China Radio International, no evidence exists that the vaccine cooperation had acquired a political aspect or that the Uighur issue had become a precondition for such cooperation. “On the contrary, China’s efforts against the pandemic and its vaccine policy show that it is not seeking to politicize the issue and is compartmentalizing its relations,” he told Al-Monitor, pointing to China’s investment agreement with the European Union despite EU criticism of the crackdown in Hong Kong and its involvement in a major free trade agreement with Australia despite bilateral tensions.

Coronavirus cases at Beijing customs were cited as the reason for the vaccine delivery delay to Turkey, Gocmen recalled, adding, “The delivery took place several days later. In the meantime, there was no development in Turkey regarding the extradition accord, which creates the impression that the allegations [about a link] are groundless.”

According to Gocmen, Turkey is closely interested in China’s Belt and Road Initiative and places importance on Beijing’s policy of not interfering in its domestic affairs. He opined that no coercive factor seems to exist in the background as bilateral cooperation was already expanding into the security realm. The extradition accord draws a definitive framework on terrorism, and Turkey has shared its sensitivity on the Uighurs with China, Gocmen said. “Turkey has drawn a red line against the manipulation of its sensitivities in big-power rivalries,” he added.

The pro-government Turkish media has similarly argued that the accord should be of no worry for the Uighurs as it contains provisions allowing Ankara to reject Beijing’s extradition requests. The tone of the coverage could well be an effort to prepare the Turkish public for upcoming ratification. The accord allows for the rejection of extradition requests if the individual in question is a political dissident or prosecuted on ethnic or religious grounds, holds Turkish citizenship or is in the process of seeking asylum.

Amid the international outcry over China’s detention camps for Uighurs, Erdogan had put the accord on the backburner. But the Chinese ratification — whether or not it is linked to the vaccine — could turn up pressure on Ankara to reciprocate. At home, the government is under counter-pressure from Islamist and nationalist quarters, but also the main opposition Republican People’s Party, to raise its voice in defense of the Uighurs. Erdogan is accused of “selling off” the Uighurs, despite his claim to be the defender of oppressed peoples across the world.

Erdogan would hardly care what the opposition says, but he needs to stay on good terms with his de facto coalition partner, the Nationalist Movement Party (MHP), whose ideology prioritizes bonds with Turkic communities across the world. Prior to his four-year partnership with Erdogan’s Justice and Development Party (AKP), MHP leader Devlet Bahceli often blasted the government for being meek on the Uighur issue. He has kept rather quiet in recent years as Erdogan put the extradition accord in the freezer while adopting a low-key approach to the Uighur problem.

During a landmark visit to Beijing in July 2019, Erdogan admitted that Turkey’s Foreign Ministry had erred by prematurely issuing a condemnation of China earlier that year over the alleged death of a renowned Uighur musician in an internment camp, which the Chinese sought to debunk with footage of the man. Erdogan went even further, denouncing the political “abuse” of the Uighur issue — apparently by Uighur activists in the diaspora. “Such abuses affect negatively Turkish-Chinese ties. … Those engaging in such abuse … are making both their compatriots and Turkey pay the price,” he said. In an earlier embarrassment for Ankara, China had arrested several Turkish nationals for providing illegal passports to Uighurs to flee China.

Since then, Erdogan has shifted to a more cautious approach vis-a-vis Beijing and sought to suppress the Uighur issue as a disruptive factor in bilateral ties. Now, there are reasons to expect he might go further by giving the nod to the ratification of the extradition accord.

First, China is emerging as an alternative financier of costly infrastructure projects in Turkey. Ahmet Davutoglu, a former Erdogan confidant who now leads an opposition party, denounced last month “a special, unquestioning favoritism toward China in recent times.” Referring to speculation that Turkey might seek Chinese funding to build an artificial waterway as an alternative to the Bosporus, he warned that such a step would “flout both national sovereignty and economic profitability.”

Second, the Ankara-Beijing rapprochement could gain further impetus should tensions escalate in Turkish-US ties under the upcoming Joe Biden administration.

Third, much to Erdogan’s relief, Ankara’s ties with Beijing — unlike those with the West — are free from thorny issues such as the deteriorating state of democracy, freedoms and the rule of law in Turkey.

Fourth, Ankara is suspicious of the motives behind the West’s criticism of China’s treatment of the Uighurs. The opposition has only fueled those suspicions by riding the same wave. Bahceli probably caught his supporters off guard in October, when he drew a link between Western-backed “color revolutions” in former Soviet republics and the Uighur issue. “The MHP will not be carried away by the venomous current of dirty scenarios hatched up in dark chambers,” he said. His approach shows that the antagonistic, conspiratorial view of the West – the glue of the AKP-MHP alliance since the failed coup attempt in 2016 — has now extended to the Uighur problem.

Finally, the essential problem in the Uighur dossier is the East Turkestan Islamic Movement, whose armed militants, mainly Uighurs, hold sway in Syria’s rebel-controlled province of Idlib. Under deals between Turkey and Russia, the group is among radical factions slated for elimination. Group members and their families could have hardly crossed to Syria from Turkey and established themselves in Jisr al-Shughur without the involvement of Turkish security forces. Yet the group, along with other al-Qaeda-inspired factions, has been growing into a serious threat to Turkish-Russian deals in the region. Heeding UN Security Council resolutions, Ankara has designated the group as a terrorist organization, while Washington removed the group from its terror list in November on grounds it no longer exists. Although Washington’s move could be seen as relieving for Turkey, other dynamics are also bearing on Ankara’s calculus. In May, for instance, Russia said the East Turkestan Islamic Movement was behind an attack in Idlib that claimed the life of a Turkish officer. Concerns are on the rise in Ankara that the group, which has links with the Uighur diaspora, could grow into a security threat for Turkey.

In light of all those factors, a decision by Erdogan to have the extradition treaty finalized might not come as a surprise. Given Ankara’s record of not treating designated terrorist groups as such, Erdogan might well soften objections at home by tacitly promising that nothing will change on the ground.