Improved Turkish-Chinese ties come at a cost to Uighurs

Turkish President Recep Tayyip Erdogan’s rhetoric on protecting Uighurs' human rights has become subdued as he attempts to lure Chinese investment and other funds to Turkey. 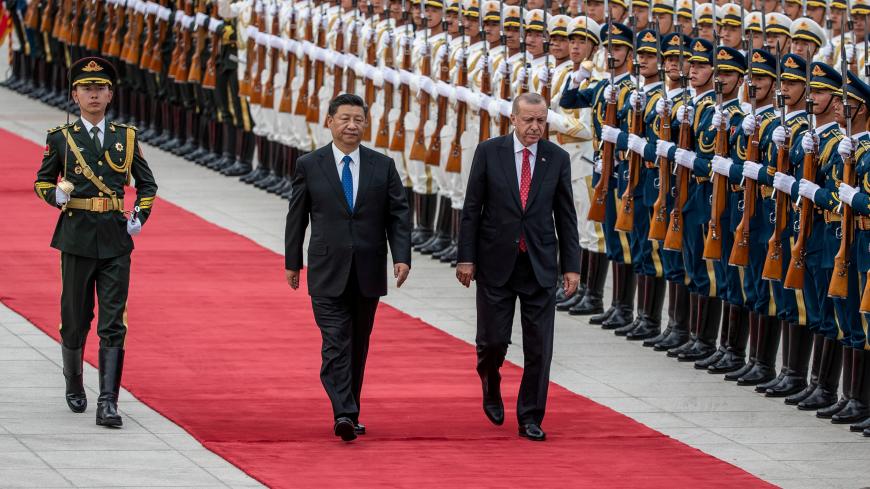 Turkish President Recep Tayyip Erdogan and Chinese President Xi Jinping inspect an honor guard during a welcome ceremony at the Great Hall of the People in Beijing, July 2, 2019. - Roman Pilipey/Pool via REUTERS

Fatima, a Uighur in her early 30s, believes that she can no longer conceive children because she was involuntarily sterilized while held for more than a year in a Chinese-government-run detention camp, where she unknowingly ingested pills that made her infertile. When she was taken to the camp, her two kids were placed in orphanages, she told Al-Monitor through tears. Fatima is lucky that she left the camp alive.

The Uighurs are a Turkic people who share a common linguistic, ethnic and religious identity with the ethnic Turks of today's Turkey. They originated in the region they continue to call East Turkestan, which the Communist Chinese renamed Xinjiang after taking control in 1949.

The Chinese government has subsequently attempted to sinicize the Uighurs, systematically assimilating them through such practices as assigning them Chinese names and banning their Muslim names and other coercive measures, including targeting their Muslim faith. “I am not even allowed to use my name in my hometown,” Fatima, who is from Kasghar, lamented via Skype.

“We [Uighurs] are all potential criminals in the eyes of the state, and we need to be reeducated,” Fatima asserted. “That is the purpose of the detention camps.” She further remarked, “There are several streets with emptied, padlocked houses still under the watchful eyes of street cameras. There are mosques in every neighborhood, but you cannot [broadcast] the [call to prayer] anymore.”

Fatima has a deep appreciation for Turkish President Recep Tayyip Erdogan. “Erdogan is a mujahedeen [holy warrior] many times over,” she said while referring to Erdogan's visit to China in early July. She does not want to believe that Erdogan actually said that the people of Xinjiang, an autonomous region in northwest China, “live happily,” as Chinese state media reported him as saying. The overwhelming majority of the region's approximately 20 million residents are Uighurs.

Al-Monitor approached Yemlibike Fatkulin, the foreign minister and English spokeswoman for the East Turkestan government in exile, about the situation in Xinjiang.

“One hundred twenty-four detention camps, 66 labor camps run by the Bingtuan [the Xinjiang Production and Construction Corps], and 193 prisons have been established all around the region since 2016, and the human suffering is getting worse,… with 1.12 million Chinese official minders living among Uighur and other Turkic people,” said Fatkulin, in Washington, DC.

After Erdogan’s visit to China, Uighurs in Turkey held protests around the country to draw attention to the plight of the Uighurs, but Turkish media mostly ignored them. The Turkish press had quoted Erdogan as saying, “People in China’s Xinjiang province are leading a happy life in line with Chinese development and welfare. Turkey cannot allow anyone [to damage] the harmony of Turkish-Chinese relations. Turkey stands against extremism.”

In February, the Turkish Ministry of Foreign Affairs had called on the Chinese government to respect the Uighurs' human rights and shut down the detention camps. Months later, within days of Erdogan’s return from China, 22 countries from the UN Human Rights Committee signed a statement on July 8 calling on China to halt mass arbitrary detentions and other violations against Muslims in Xinjiang. Turkey was not among the signatories, nor were any other majority-Muslim nations.

China responded with a letter to the United Nations claiming that the camps were part of a policy to combat terrorism. On July 14, the Turkish daily Karar ran the headline “And This Is China’s Ummah,” hitting back at the Muslim signatories to Beijing's letter, which included Qatar and Saudi Arabia, along with 38 other countries. Turkey was not one of them.

How should one interpret Erdogan's differing words and actions in regard to the Uighurs? Four factors might be influencing Ankara’s approach to the issue.

First, Turkey's support of the Uighurs has a long tradition. It did not begin under Erdogan. After the Chinese Communist Party took over East Turkestan, there have been three major Uighur migrations to Turkey, including in the 1970s. They established nongovernmental organizations in Turkey to defend their rights and supported the integration of newly arriving Uighurs. The Turkish state adopted a subdued yet embracing policy toward Turkic emigrants. According to Ismail Cengiz, prime minister of the East Turkestan government in exile, an estimated 30,000 Uighurs live in Turkey today.

In the 1990s, Turkish prime ministers and presidents posed with Uighur leaders living in Turkey, but attitudes began to change in 1996, as Turkey grew closer to China. The government became more vigilant toward the activities of Uighur NGOs and much more selective in regard to Uighur emigration, refusing entry to some. The same vacillating policy appears to have been resurrected under the Justice and Development Party. Erdogan had promised to be the protector of all Muslims, upholding a relatively long-running policy of welcoming the Uighurs. With no challengers in the Muslim world for the role of protector of the Uighurs, however, Erdogan faces no pressure to make good on his claims.

Second, it is a common perception that Erdogan believes in his own propaganda. He is pugnacious and surrounded by eager yes men, including when it comes to making bold pronouncements. The Uighur case is proof that brotherhood centered around the ideology of political Islam has its limits.

Murat Yildiz, who has been researching the Uighurs’ struggle for more than a decade, told Al-Monitor, “During Erdogan’s visit to Urumqi [in 2012], a woman spoke with him and Mrs. Erdogan. Chinese authorities first arrested, then released [the woman]. Later she was taken to the camps. We do not know where her young kids are. Her husband, who is a Turkish citizen, has been trying for years to get her released, but without success. Republican People’s Party parliamentarian Gursel Tekin tabled a parliamentary inquiry about the Turkish citizens taken to the camps, but we are still waiting for an answer from the Ministry of Foreign Affairs."

Indeed, both the left- and right-wing opposition parties have been lobbying and inquiring about the rights of Uighurs, but little has been achieved. With the entrenchment of one-man rule in Turkey, the Uighurs have been left to the mercy of that one man rather than the broader state.

Third, it is an obvious understatement to say that the Uighurs are at a distinct economic disadvantage. “China is a force to be reckoned with,” an ambassador who served in East Asia and who requested anonymity remarked to Al-Monitor. “Turkey’s stand on the Uighurs is wholehearted, but we desperately need Chinese investment in the country. We also want to be a part of the new Silk Road project. It is not a secret that Turkey needs funds. There are many fewer regulations and strings attached when you do business with the Chinese government than with Western governments.”

Money is indeed a factor cited by several bureaucrats. A senior official who liaisons between refugees and the Ministry of Interior told Al-Monitor on the condition of anonymity, “On a humanitarian level, Turkey does its best to host as many people as possible. Erdogan’s visible change of rhetoric may not necessarily mean a direct policy reversal. Which is more important? Signing a UN document or paying for the needs of hundreds of families escaping persecution?”

Fourth, the government is engaged in a tacit effort to alter public opinion on the Uighurs. Over the years, pro-Uighur sentiment has led to the development of Sinophobia, though typically manifest as sporadic bursts of anger rather than a burgeoning grassroots movement. In the last couple of years, ultra-nationalist newspapers have periodically published pieces calling Uighurs separatists, CIA agents, terrorists and even Gulenists out to destroy Turkish-Chinese relations.

Cengiz told Al-Monitor, “Due to false allegations by the Chinese government, several Uighurs have lost their right to freedom of movement in Turkey. The allegations are about having links to terrorist organizations. Many Uighurs who have made a phone call to Syria or may have gone to Syria are being recorded under the suspicion of being a terrorist and coded as G-87, [a status that] requires them to check in, or to live in immigration centers or even be expelled from Turkey.”

China has become too valuable for Erdogan to continue to firmly embrace the Uighurs, but that does not necessarily mean that Turkey is ready to close every door to them either.

China in the Mideast
Human rights