Despite the brotherhood accorded to them as kinsmen and coreligionists, Uighurs in Turkey increasingly live in fear of deportation to China. 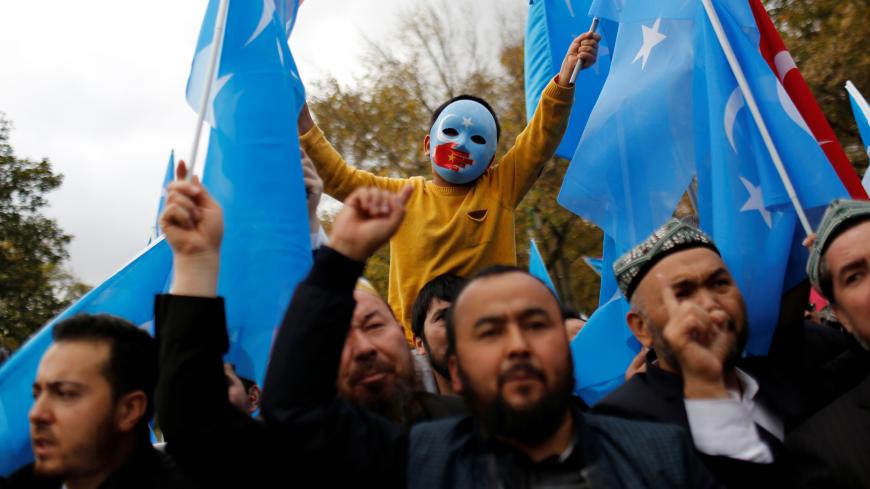 A masked Uighur boy takes part in a protest against China at the courtyard of Fatih Mosque, a common meeting place for pro-Islamist demonstrators, Istanbul, Turkey, Nov. 6, 2018. - REUTERS/Murad Sezer

Turkey sees itself as a leading supporter of the Uighurs, its Turkic kinsmen and co-religionists in China’s autonomous Xinjiang region who are bearing the brunt of Beijing’s repressive efforts to “Sinicize” all religions in the country.

Nevertheless, Uighurs in East Turkestan — as Uighurs as well as Turks know Xinjiang — are increasingly looking to the West for support as Ankara’s reluctance to upset its ties with China becomes more apparent.

Faith in Ankara has also plummeted among Uighur refugees in Turkey. For many of them, what Ankara says and what it does are proving to be different things. Instead of feeling safe in Turkey, Uighurs are increasingly gripped with the fear of deportation back to China.

Turkey appears hamstrung because of its burgeoning economic and trade ties with China, which also include the potential for cooperation in such strategic fields as nuclear power.

The current trade figure stands at around $25 billion annually, overwhelmingly to China’s advantage. The imbalance is alleviated to some extent by the fact that China is also a prime investor in Turkey.

Huawei, one of China’s leading brand names, is among the thousands of Chinese companies in Turkey, and its Turkish facility employs over 500 Turkish technicians. The Industrial and Commercial Bank of China is another major investor. There is also talk about the possibility of Turkey purchasing fighter jets from China following Turkey’s expulsion from the US F-35 program because of its purchase of Russian S-400 air defense systems.

President Recep Tayyip Erdogan’s visit to China in July marked the fifth face-to-face meeting between him and President Xi Jinping over the past two years. The visit, however, did little to assuage the Uighurs, who were horrified by reports in China’s state-controlled media quoting Erdogan as saying that they enjoyed happy lives in China.

Ankara denied the reports, blaming them on a mistranslation of Erdogan’s words. Given the current trajectory of Turkish-Chinese ties, many Uighurs remain unconvinced.

Concerns among Turkey’s estimated 35,000-strong Uighur community peaked in June following reports of the deportation to China of an Uighur refugee named Zinnetgul Tursun with her two daughters.

Turkey’s Directorate General of Migration Management denied the reports, saying that Tursun’s request for long-term residency was denied because she did not fulfill the necessary requirements, but added that she could still apply for another category of residency. It also emphasized that no foreigners are deported if they face possible persecution in their country of origin.

Seyit Tumturk, the head of the East Turkestan National Assembly in Turkey, insists that Tursun's deportation took place. Talking to Euronews, Tumturk said Tursun was deported on June 27 and that she was sent to prison on arrival in China, while her daughters were given to relatives.

The Turkish authorities have not produced evidence that Tursun is still in Turkey.

Hers is not the only case causing anxiety amount members of Turkey’s Uighur community. In May, Aihemaiti Xianmixiding, who had legal residency in Turkey, was arrested and sent to a deportation center, accused of being a terrorist attached to the little-known Uighur National Movement.

Activists say hundreds of Uighurs are currently held in Turkish deportation centers, while many others have lost their residency in recent months. With no ability to renew their Chinese passports and no legal status in Turkey to protect them, these people face an uncertain future.

In a separate interview on Aug. 21, Tumturk voiced the Uighurs' increasing disquiet with Turkey. He said Ankara had the right to develop its ties with China, but added that it should also consider the rights of the Uighurs. Turkey “should tell China that Turkish-Chinese ties can only gain a strategic dimension if it abandons its repressive policies," Tumturk said. “Simply saying ‘We respect China's territorial integrity and China's One-China policy’ or ‘If there are terrorists among the Uighurs we will punish them’ is not enough.”

Tumturk also said that characterizing people from eastern Turkestan “who simply want to live freely and independently” as terrorists was “unacceptable.”

The last time Turkey went on a limb for the Uighurs, only to climb down later, was in February. Ankara responded angrily to reports that the Uighur folk poet Abdurehim Heyit had died while in detention in Xinjiang. The Turkish Foreign Ministry said in a statement, “It is no longer a secret that more than one million Uighur Turks — who are exposed to arbitrary arrests — are subjected to torture and political brainwashing in concentration centers and prisons.” It went on, “The reintroduction of internment camps in the 2Ist century and the policy of systematic assimilation against the Uighur Turks carried out by the authorities of China is a great shame for humanity.”

Foreign Minister Mevlut Cavusoglu brought the matter up at a UN meeting, calling on the international community to respond to China’s human rights violations in Xinjiang. Many Uighurs in Turkey and around the world were encouraged by these statements, considering them a precursor to a harder line by Ankara toward Beijing after its prolonged silence over the situation in Xinjiang. However, their joy was short-lived.

Beijing released a video recording of Heyit in which he said he was alive and well, much to Ankara’s embarrassment. China’s ambassador to Turkey went on to warn Ankara that pursuing such a line against China would do irreparable damage to ties.

“Criticizing your friend publicly everywhere is not a constructive approach,” Ambassador Deng Li told Reuters in an interview. “If you choose a non-constructive path, it will negatively affect mutual trust and understanding and will be reflected in commercial and economic relations.”

These developments were followed by Erdogan’s visit to China in early July, a trip that sweetened the sour atmosphere between the sides. Ankara also refused to sign a July letter from 22 mostly Western UN member countries sharply criticizing Beijing over its treatment of the Uighurs and calling for an inspection team to be sent to Xinjiang.

In a minor concession, Beijing allowed Turkey to send an observation team to the region following talks between the foreign ministers of the two countries on July 30. It remains unclear, though, how free a hand the team will be given by the Chinese authorities.

Ankara’s reluctance to undermine ties with Beijing was also apparent in 2009 after Erdogan said China’s policies against the Uighurs were “tantamount to genocide.” Despite Erdogan’s comment, Ankara pursued a line that showed it was not prepared to endanger its ties with Beijing for the sake of the Uighurs.

In an added problem for Ankara, at least 37 countries, including Islamic ones like Pakistan, Saudi Arabia, Kuwait, Qatar and the UAE, have signed a counter-letter backing Beijing on the Uighur issue.

Meanwhile, the issue of Uighur jihadists in Syria’s Idlib province remains another sensitive issue between Ankara and Beijing. China is helping the Syrian regime combat these fighters while some of them are said to have joined Turkish-supported opposition groups fighting the government.

Although Turks generally support the cause of the Uighurs — if not with the same fervor with which they support the Palestinian cause — their approach to the topic is mixed.

For example, Islamist commentator Rahim Er, who writes for the pro-government Turkiye, avoids laying any blame on the Chinese government, claiming the troubles faced by the Uighurs are due to meddling by outsiders.

“Rival intelligence agencies who aim to put China in a difficult situation are tricking the Uighurs into rebelling, which results in their being crushed,” Er argued in a recent article. He added that Turkey was faced with a similar situation with regard to its Kurds.

Veteran commentator Taha Akyol is more forthright and critical of Turkey’s generally mute approach to China’s policies in Xinjiang. According to Akyol, who writes for Karar, Ankara has to explain to Beijing — “using nonconfrontational diplomatic language” — that it is extremely sensitive to the rights of the Uighurs.

“[Turkey’s] reluctance to do even that is regretful,” Akyol wrote.

Given the current state of Turkish-Chinese relations, there appears to be little that Ankara can do for the Uighurs.