The Chinese foreign minister’s visit to Turkey reflects the desire of both sides to further develop bilateral ties despite hitches stemming primarily from the widespread public support Uyghurs enjoy in Turkey. 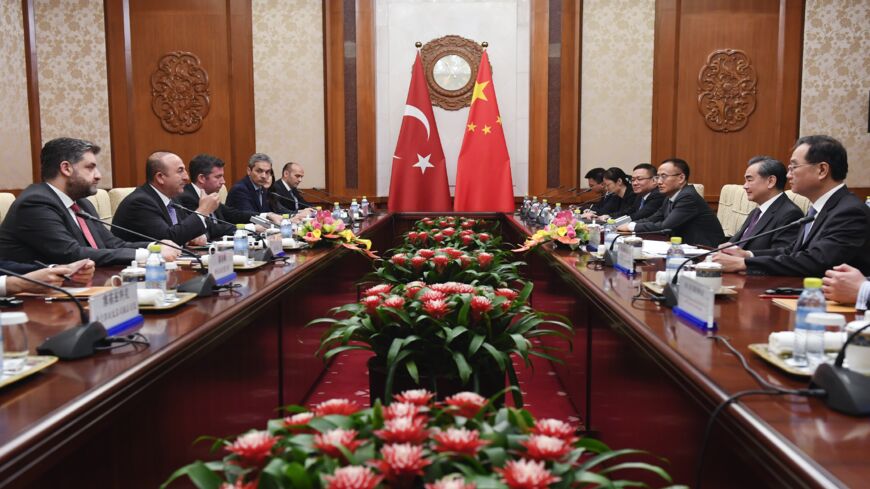 Chinese Foreign Minister Wang Yi’s visit to Turkey last week underscored the desire of both sides to advance their rapprochement, especially in the economic field, despite widespread misgivings in Turkey and abroad over Beijing’s treatment of its Uyghur minority.

Wang met with his Turkish counterpart, Mevlut Cavusoglu, and President Recep Tayyip Erdogan on March 25, as part of a regional tour including Saudi Arabia, Iran, the United Arab Emirates, Bahrain and Oman that highlights the Middle East’s growing importance for China amid a heating rivalry with the United States.

Though Chinese interest in the Middle East has traditionally been driven by oil, China in recent years has sought to expand its cooperation realms and influence in the region. All six countries on Wang’s tour have signed on to China’s One Belt One Road (OBOR) initiative, along with several other countries in the Middle East. The tour followed the first high-level talks between Beijing and the Joe Biden administration, which got off to a tense start on March 19.

The importance Ankara placed on Wang’s visit was palpable from the efforts it made to contain protests by the Uyghur diaspora in Turkey. The police strictly controlled hundreds of protestors in Istanbul’s Bayezid Square, who chanted slogans accusing Beijing of “genocide” in Xinjiang — the home of the Uyghurs, a Muslim minority with ethnic bonds to Turkey — and waved blue-and-white flags of the independence movement of East Turkestan, the name by which the exiles and Turkish nationalists refer to Xinjiang.

Moreover, Seyit Tumturk, a senior leader of the Uyghur diaspora who intended to attend a demonstration in Ankara, found himself in house detention on the grounds he was at risk of a COVID-19 infection. The authorities placed police on watch at his door, Tumturk said, calling the quarantine a “bogus operation” to keep him confined at home.

From the broader optics of the US-China rivalry, Wang’s visit confirms Turkey’s role as an important player in the Asia-Pacific. Beijing feels the need to consolidate its relations with friendly countries to counter Washington’s global campaign against China, marked by mounting criticism of its democracy and human rights record. Beijing is increasingly faced with accusations of genocide against the Uyghurs not only from the United States but also from Western nations such as Britain, Canada and Australia. During recent visits to Japan and South Korea, seen as the sign of a mounting US effort to contain China, Secretary of State Antony Blinken warned that the Biden administration would “push back if necessary when China uses coercion and aggression to get its way.”

According to Cavusoglu, the Turkish side conveyed to Wang its “sensitivity and thoughts” on the Uyghurs, while the talks focused on ways to boost economic exchanges and cooperation against the coronavirus pandemic, including inoculation. Turkey was among the first countries to buy and use the Chinese CoronaVac vaccine, but the process has not been free of hitches.

The trade volume between China and Turkey was worth about $22 billion in 2019, yet Turkey’s largest trade deficit is with China, standing at more than $20 billion last year.

China’s cooperation with Turkey as part of OBOR projects is likely to have been a major topic in Wang’s talks with Turkish officials. Turkey is of strategic significance for China’s economic corridors to Europe as it lies on trade routes extending from western China to Central Asia, the Caspian and Europe, mirroring the ancient Silk Road. In 2017, Azerbaijan, Georgia and Turkey inaugurated a railroad between the three countries that established a freight and passenger connection between Europe and China. Using that route, Turkey sent its first export train to China in December. The train, which carried home appliances, covered a distance of nearly 8,700 kilometers (5,400 miles) from Istanbul to the Chinese city of Xi’an. On the eve of Wang’s visit, Erdogan approved a freight and passenger transport deal, signed between Ankara and Beijing in May 2017.

Turkish-Chinese ties have in recent years extended also to financial cooperation. In March 2020, Turkey’s sovereign wealth fund signed a memorandum of understanding with China’s Sinosure to provide insurance support of up to $5 billion for financing activities. The fund said the deal would include Sinosure recommending Chinese enterprises as investors, and financial institutions for energy, petrochemicals and mining projects. The deal followed China’s transfer of $1 billion worth of funds to crisis-hit Turkey during a critical election period for Erdogan in June 2019 under a 2012 currency swap agreement.

Turkey hopes that the deal Russia brokered to end the Azeri-Armenia conflict over Nagorno-Karabakh in November will also boost its prospects in trade with Central Asia and China. Among other terms, the deal calls for the reopening of some transport links in the region, much to the chagrin of Iran, which has benefited from the blockage of roads by serving as an alternative route and charging passage fees from Turkish trucks heading to Central Asia. The reopening of the routes, Turkey hopes, will boost its regional influence and significance in Beijing’s eyes.

The peace process in Afghanistan was another topic on Wang’s agenda in Ankara. China and Russia have recently proposed the creation of a regional “security dialogue platform” to address security concerns, including Afghanistan. Though the proposal is still premature, Turkey would be an indispensable partner in any effort by China to raise its profile in Afghanistan.

Wang is likely to have brought up a controversial extradition agreement that China and Turkey signed in 2017. Turkey’s parliament has yet to approve the deal, which the Chinese legislature ratified in December. Apprehension is rife among the Uyghur diaspora and their Turkish supporters that Beijing aims to use the deal to expedite the deportations of Uyghur dissidents taking refuge in Turkey. Such misgivings have been fueled by Ankara’s reluctance to speak up for the Uyghur in the past two years amid flourishing economic ties with China and allegations that Beijing is using economic cards to press for the ratification of the deal.

Turkish opposition politicians have even raised concerns that China is delaying the delivery of the CoronaVac jabs to press Ankara to ratify the extradition deal, a claim that Cavusoglu has denied. Turkey, however, has yet to receive new batches of the vaccine since the arrival of about 10 million doses in December and January.

Speaking a day after his meeting with Wang, Erdogan said he had raised the delay with the Chinese minister, stressing that Turkey was supposed to receive 50 million doses by the end of February.

Nevertheless, Erdogan’s government appears bent on pursuing closer relations with Beijing amid its deep confidence gap with Turkey’s traditional Western partners. But managing the rapprochement is likely to grow more difficult for Ankara as China’s rivalry with the West intensifies.