Hundreds gathered in both Ankara and Istanbul in protest of what they say is a genocidal campaign against the ethnic group by Beijing. 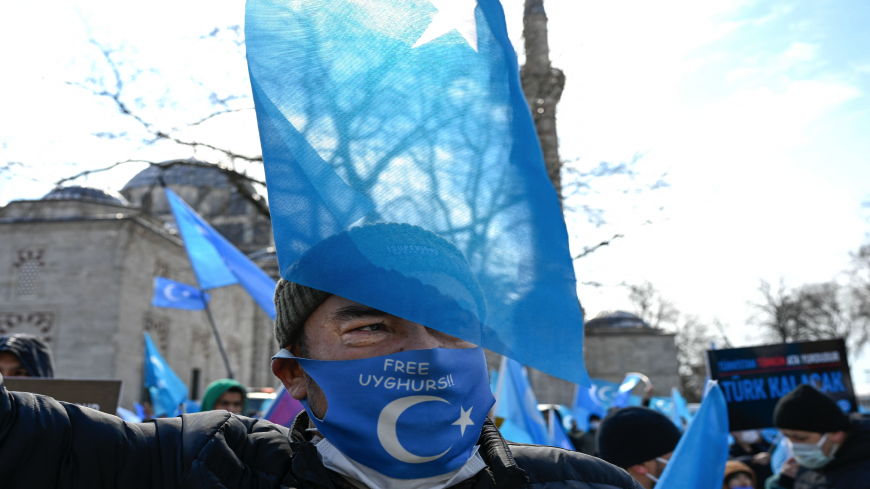 A protester from the Uyghur community living in Turkey attends a protest against the visit of China's foreign minister to Turkey, in Istanbul on March 25, 2021. Hundreds protested against the Chinese official visit for what they allege is oppression by the Chinese government against Muslim Uyghurs in the far-western Xinjiang province. - BULENT KILIC/AFP via Getty Images

Hundreds of Uyghurs took to the streets of Ankara and Istanbul on Thursday to protest Chinese Foreign Minister Wang Yi’s visit to Turkey. They called for Turkey’s Islamist government to take a firmer stance in defense of its ethnic cousins, who are facing what rights groups say is a genocidal assimilation campaign by Beijing.

Crowds waving the blue Uyghur national flag and holding up posters of missing loved ones gathered in Istanbul’s Beyazit Square and chanted anti-Beijing slogans. “We are here to say ‘Stop’ to the genocide China is executing against people of East Turkestan and convey our concern regarding Chinese Foreign Minister Wang Yi’s visit to Turkey," pro-Uyghur activists said in a joint statement.

In Ankara, scores of other Uyghurs who were gathered outside the Chinese mission denounced the mass detentions of their kin in re-education camps as Wang met with his Turkish counterpart, Mevlut Cavusoglu. Wang also met with Turkish President Recep Tayyip Erdogan. The trip is meant to lay the ground for an official visit by Chinese President Xi Jinping to Turkey, to reciprocate Erdogan’s 2019 trip to China, Turkish officials say.

Cavusoglu said he had conveyed “Turkey’s sensitivity and thoughts” on the plight of the Muslim Turkic minority in China’s Xinjiang province to Yi and discussed expanding economic ties and cooperation in the fight to contain the COVID-19 pandemic. China is the main supplier of coronavirus vaccines to Turkey, and rights activists fear that Beijing will use this dependency to press Ankara to move against the Uyghur dissidents in Turkey where there is widespread sympathy for their cause. Turkey is expected to receive a total of 100 million doses of the vaccine by May.

Turkey is being buffeted by a third wave of the pandemic, recording nearly 30,000 new cases on Wednesday.

Turkey’s mounting economic woes and rocky relations with the United States and the European Union have made China an attractive partner. There are no human rights strings attached to China’s growing investments in and currency swap deals with Turkey.

In recent months, Turkish police have raided and detained around 50 Uyghurs, marking a sharp increase from last year, lawyers say. The bigger fear for Turkey’s 50,000 strong Uyghurs is being deported back to China. These grew when China announced that it had approved an extradition treaty with Turkey, which was signed in 2017. The Turkish parliament has yet to ratify the agreement, which Uyghur activists call “a legal trap.”

The UN estimates that up to a million Uyghurs are being held in the camps. The United States said in January that China had committed “genocide and crimes against humanity," and on March 22, it joined the United Kingdom and Canada in imposing economic sanctions on China over its violent repression of the Uyghurs.

Until recently, Erdogan and his ruling Justice and Development Party were among the staunchest advocates of the Uyghur cause. In 2014, Rabia Kadir, a prominent Uyghur activist, said of Erdogan, “In Turkey’s [modern] history, no other government defended the Uyghur cause as robustly. If anyone comes out and says ‘Erdogan didn’t help the Uyghurs,’ I will confront that person."

China in the Mideast
Human rights