The Turkish public used to speak out loudly and often against suppressive Chinese policies against Uighur Turks, but now the media, the public and the government are keeping mum. 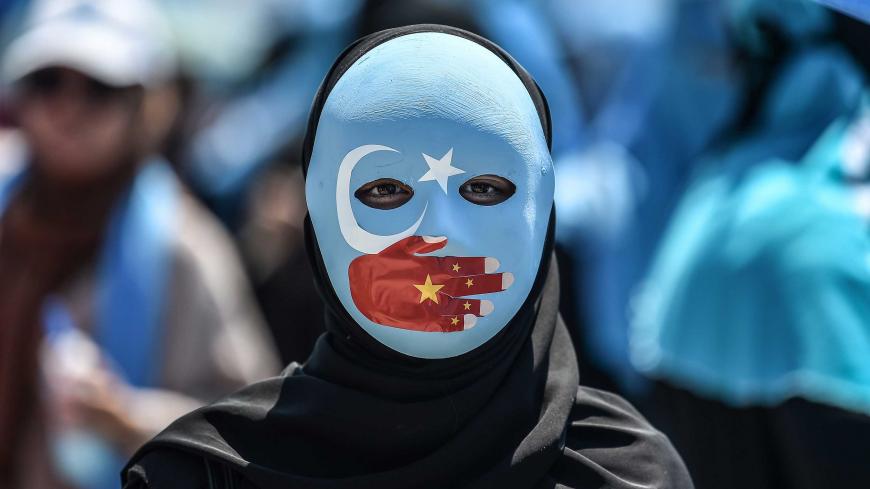 Over the past few weeks there have been widespread reports of systemic Chinese oppression of as many as 1 million Uighur Turks living in China’s Xinjiang region, and allegations that members of this mostly Muslim ethnic minority are forcefully confined to concentration camps for “re-education and de-radicalization.”

Academics, journalists and opinion-makers in many countries frequently bring up the issue on social media, but strangely, the Turkish government, the ruling Justice and Development Party (AKP) and its ultranationalist ally the Nationalist Movement Party (MHP) appear to be ignoring the problem. The Turkish media also appear deaf and mute.

Turkey had always been sensitive to oppressive policies against some 22 million Uighur Turks living in China’s Xinjiang Uighur Autonomous Region, also known as East Turkestan. In the past, harsh Chinese policies used to spark protests on Turkey's streets, and black flowers were delivered to Chinese diplomatic missions in Turkey. However, nothing of this nature happens nowadays. There are no protests.

One wonders the reason for the silence at a time when nationalist sentiments in Turkey are gaining momentum.

There are three possible explanations for the lack of reaction from Ankara. First, there are political matters. Ankara, which is experiencing serious economic problems, is trying to diversify its holdings of US dollars and eurobonds. China offers an opportunity for Turkey to diversify its resources.

Ankara also hopes that China can invest in Turkey in the fields of energy — particularly natural gas storage, nuclear energy and solar energy — communication, satellite technology, the internet, mobile broadband, rail and sea logistics, e-commerce, e-finance and mining. Considering Beijing’s massive infrastructure project, One Belt, One Road, Ankara believes China can bring hundreds of millions of dollars in capital to Turkey for investments in Turkey's critical transport infrastructure. It's worth remembering that the US Senate is considering a bill to prevent Turkey from borrowing from international financial institutions, including the International Monetary Fund.

"Now it's not as easy as it was some years ago for us to borrow from the US or Europe," a Turkish economist working in a government institution told Al-Monitor on condition of anonymity. "We now think we can try to borrow from China. We can also borrow from the yuan market, which will be no different than borrowing from other markets."

Considering the deteriorating economy, it's a safe bet that Ankara will have to sell some of the state’s most important assets. Chinese investors may bring enough capital to give Erdogan’s Cabinet a little breathing room before the local elections in March.

Also worth mentioning, Chinese banks are very active in creating a trade zone in the wider Middle East including Iran, Turkey, the Caucasus and North Africa, in which the Chinese yuan is to be used as the new currency. In two to three years, Ankara hopes to play a pivotal role in these efforts.

By 2023, the facilities will be able to accommodate a total of 10 billion cubic meters — about 20% of Turkey's annual natural gas consumption. Thus, China is helping Turkey diversify its sources and lessen its dependence on Russia and Iran.

Another possible reason why Turkish media outlets are ignoring China’s oppression could be the government restrictions on the media — though no one seems to be covering the issue, whether mainstream, pro-government or even anti-government media.

Finally, there are those who think the real cause for the silence is the sudden eruption of US media interest in the Uighurs, which some see as US manipulation. According to this theory, the United States doesn’t want a Turkey-China rapprochement and is intentionally keeping the Uighur issue front and center. For Turkey to criticize China on the topic would serve US interests.

The only political reaction in Turkey to the Chinese practices came from Omer Faruk Gergerlioglu, a parliament member representing the pro-Kurdish Peoples’ Democratic Party (HDP). Gergerlioglu has been the only public figure to publicly criticize China, pointing to a report by the UN Committee on the Elimination of Racial Discrimination. The report alleges the Chinese government is confining Uighur Turks to camps and torturing them. He has submitted an inquiry about the situation to Foreign Minister Mevlut Cavusoglu.

If Cavusoglu answers the query we may better understand why Ankara is so quiet. But don’t forget, in our new executive political system under Erdogan, ministers are no longer required to answer queries from parliament.