Turkey has a special place in China’s Belt and Road initiative, as confirmed by the increase in Chinese direct investment in Turkey. 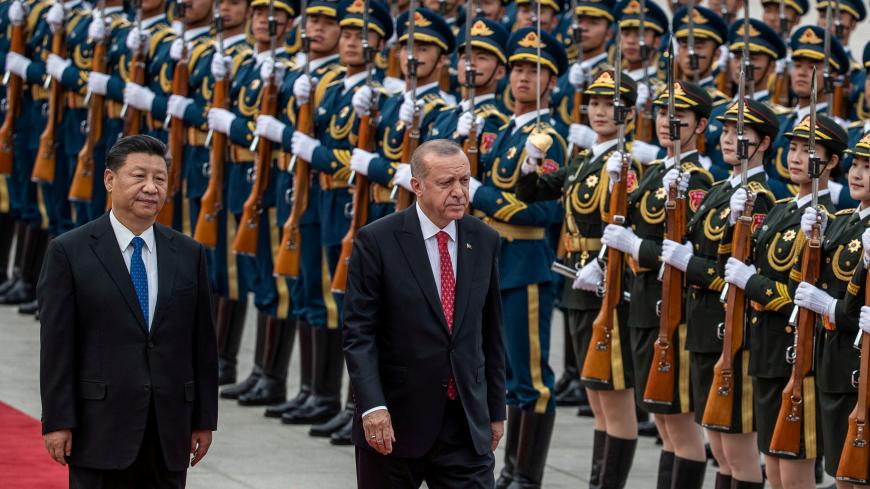 Turkish President Recep Tayyip Erdogan and Chinese President Xi Jinping inspect an honor guard during a welcome ceremony at the Great Hall of the People in Beijing, July 2, 2019. - Roman Pilipey/Pool via REUTERS

As the relationship between Turkey and the United States is going through turbulent times, Ankara’s ties with Beijing, Washington’s economic foe, are unmistakably growing.

The celebrations indicate Beijing attaches more significance to its diplomatic and economic ties with Ankara at a time of massive influx of Chinese capital into Turkey, which plays a pivotal role in China’s Belt and Road initiative — a multi-nation trade project Beijing designed to strengthen its position in the global economy.

Direct Chinese investments in Turkey are expected to double by the end of 2019 and exceed $4 billion. Cui Wei, the Chinese consul general in Istanbul, affirmed the trend, telling the Turkish media there will be a huge leap in the mutual trade.

As part of efforts to boost bilateral trade, Wei said Chinese companies will continue their investments in several areas, including infrastructure, energy, mining, telecommunication, information technologies, agriculture and health. The current trade volume between the two countries is more than $23 billion, with Chinese exports to Turkey totaling $21 billion.

Chinese banks are also gaining sway in the Turkish financial system. China’s central bank transferred $1 billion worth of funds to Turkey in August, Bloomberg reported. This represents the largest amount Turkey has gotten from China under the lira-yuan swap agreement with Beijing in 2012, the news agency said.

In March, Turkey’s Eximbank signed a credit deal worth $350 million with the Industrial and Commercial Bank of China (ICBC). In September, China’s Eximbank issued a $140 million loan to Turkey’s state lender Vakifbank to be used in the bilateral trade.

China also eyes crucial facilities in Turkey, such as ports, power plants and terminals. A Chinese consortium paid little less than $1 billion to buy a 65% stake in a Turkish container terminal, Kumport, in Istanbul, in 2015. The terminal will serve as a door to Turkish markets for Chinese goods.

After this step, the flow of Chinese infrastructure loans in Turkey also sped up. Turkey’s Banking Regulation and Supervision Agency granted operation licenses to Bank of China and ICBC for their activities in Turkey. The ICBC is one of the largest banks in China and had bought a 75% stake in Turkey’s Tekstilbank in 2015.

In July 2018, The ICBC issued a $3.6 billion finance package for Turkey’s energy and transportation sectors; $1.2 billion of the loan was used to expand the capacity of two underground natural gas storage facilities in Turkey.

Energy is another realm where cooperation grows. A Chinese enterprise paid $1.7 billion to finance the construction of a coal plant near Turkey’s Mediterranean province of Adana. The plant, which is currently under construction, represents China’s largest direct investment in Turkey, China’s state-owned Xinhua news agency reported.

China’s latest venture is to build a hospital chain in Turkey’s major cities that will offer traditional Chinese medicine treatments along with modern medicine.

But what significance does Turkey have for China’s Belt and Road initiative? According to experts, there are three key factors: Turkey’s proximity to Europe, a qualified workforce and a geostrategic location facilitating access to the Middle East and North Africa.

Altay Atli, head of the Istanbul-based consulting firm Atli Global, agrees that Turkey’s location serves well for the Belt and Road initiative. Atli said Beijing is planning to begin manufacturing in Turkey and set up a nonstop trade line between Turkey and Europe.

“China’s investments in Turkey’s infrastructure are important for the Belt and Road, because China is trying to set up a logistics network in the eastern Mediterranean,” Atli told Al-Monitor. “It is also closely following developments in the Middle East looking out for reconstruction opportunities in the postwar region (Syria). ”

Atli also highlights that China makes similar investments in other countries signed up for the Belt and Road and that Turkey’s share in the total is relatively small.

As China’s engagement with conflict-ridden regions, including the Middle East, widens, maintaining its long-standing policy to stay neutral in regional political conflicts becomes a challenge for Beijing. “Nevertheless, it still avoids directly taking sides, it establishes dialogue with all parties,” Atli said.

Thus, Chinese investments in Turkey have also political dimensions. First, Beijing is seeking to find some common ground with Ankara on political matters, particularly regarding Uighurs, a Turkic minority living mainly in China's Xinjiang Uighur Autonomous Region. Second, China would like to widen its influence in Turkey, which Beijing considers an important and regional player in the Middle East.

Turkey, for its part, considers Chinese attempts as a boon for its economic and political prospects at a time when Ankara is trying to diversify its alliances with non-Western countries. Turkey sees Chinese investments as an opportunity to support its economic development, strengthen its infrastructure and advance its technology. Chinese lenders are also gaining sway as an alternative resource for Turkey’s ailing economy.

However, being a recipient of huge sums from Chinese lenders also poses some risks. Turkey has to be careful not to fall in the so-called “debt trap diplomacy” into which some small Pacific debtor countries have already fallen by borrowing sky-high sums from China.