Differences of opinion within the Turkish security bureaucracy on how to react to China’s treatment of Uighur Turks reveal competing camps. 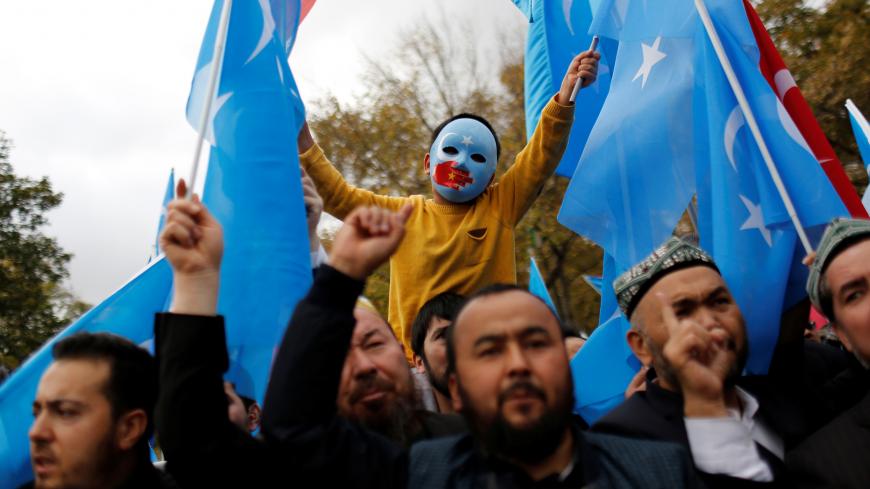 A masked Uighur boy takes part in a protest against China in the courtyard of Fatih Mosque, a common meeting place for pro-Islamist demonstrators, Istanbul, Turkey, Nov. 6, 2018. - REUTERS/Murad Sezer

In a Sept. 14 column, I had questioned Ankara's passivity toward China's tactics against ethnic Uighurs: “One wonders the reason for the silence at a time when nationalist sentiments in Turkey are gaining momentum."

While Chinese investments in Turkey are increasing, Turkey’s meager reaction to the Uighurs' treatment has amounted to no more than a few tactfully worded Foreign Ministry statements.

In the first days of February, distinguished folk poet Abdurehim Heyit — who was sentenced to eight years in a Chinese prison for one of his songs — was thought to have died behind bars. Public reaction against China was so strong that on Feb. 11, Beijing felt compelled to publish photos of Heyit to prove that he is alive.

China’s treatment of the Uighurs doesn't bear directly on Turkey’s economy, but the debate on the matter reveals the power struggle between the two circles that currently dominate Turkey's security administration.

The pro-Western and pro-NATO wing of the security establishment suffered serious setbacks from the purges that followed a botched coup in 2016. It has lost its influence to two dominant groups.

The Eurasianists believe Turkey should reduce its dependency on the West regarding defense and security matters. They say China is likely to be one of Turkey's top global partners in the next 20 years. According to this camp, the Uighur issue is being kept alive in the media under pressure by the United States and other Western powers to hurt developing economic and strategic relations between Turkey and China.

The other dominant camp of Turkey's security bureaucracy can best be described as conservative-nationalists. They are inclined to promote their pan-Turkic attitudes; they aspire for full independence of Turks and see Russia and China as colonialist powers, much as they view the United States. The power struggle between these two camps crystallized March 25 at the newly founded National Defense University of Turkey, which is controlled by the conservative-nationalists.

Zafer Karatay, Turkey's representative at the Crimean Tatar National Assembly, was invited to lecture students. Karatay is an influential journalist and documentary producer renowned for his work on the topics of Crimean Turks and Uighurs.

Karatay’s invitation to the National Defense University and the contents of his lecture were sternly criticized in the Aydinlik daily newspaper, an important media organ of the Eurasianist camp. According to the newspaper, Karatay — “who is supported by the United States” — sharply attacked the growing alliance between Russia and Turkey against the United States, which has delivered thousands of truckloads of weapons to outlawed Kurdish militants in Turkey.

“The conference, which was timed to coincide with the debate over [Turkey's proposed purchase of Russian] S-400 missile systems, disturbed Turkish officers attending the conference,” the newspaper reported. Apparently, the officers were amazed that such a conference was held after Turkey's Foreign Ministry backed the Chinese line on Uighurs.

According to the Aydinlik report, criticizing Russia for what's happening in the Crimean Peninsula and openly trying to disrupt Ankara's alliance with Moscow means serving the United States and — indirectly — the Kurdish groups in Syria, which Turkey considers a threat.

But Karatay told Al-Monitor, “The Daily Aydinlik has criticized a conference it didn’t listen to."

"It's making me a target because I spoke of the Turkish presence in the fifth year of Russia’s annexation of Crimea and the realities of Uighur Turks. I'm not an expert on Eastern Turkistan [the Xinjiang Uyghur Autonomous Region of China],” Karatay said. “But as a caring, patriotic intellectual, I can't remain indifferent to the status of our brethren there. If there is occupation and oppression in a place, it means there are also problems. As much as I'm worried about what Russia is doing in Crimea and the Chinese practices in Eastern Turkistan, I am also worried about efforts to describe Russia and China as friendly nations, as antidotes to the United States and Israel. As much as I criticize human rights violations of the United States in Afghanistan and Iraq, and Israeli oppression in Palestine, I also object to Russian and Chinese practices in Crimea and Eastern Turkistan.”

This, in turn, exposes the changes in Turkey’s strategic culture transformation. One must watch carefully whether the Eurasianist camp or conservative-nationalist camp will get the upper hand in the future, while the pro-NATO and pro-West circle is in intensive care, trying hard to stay alive in that competition.