Intelligence gathered in Syria has helped Ankara in its pursuit of violent Salafi-jihadi networks inside Turkey. 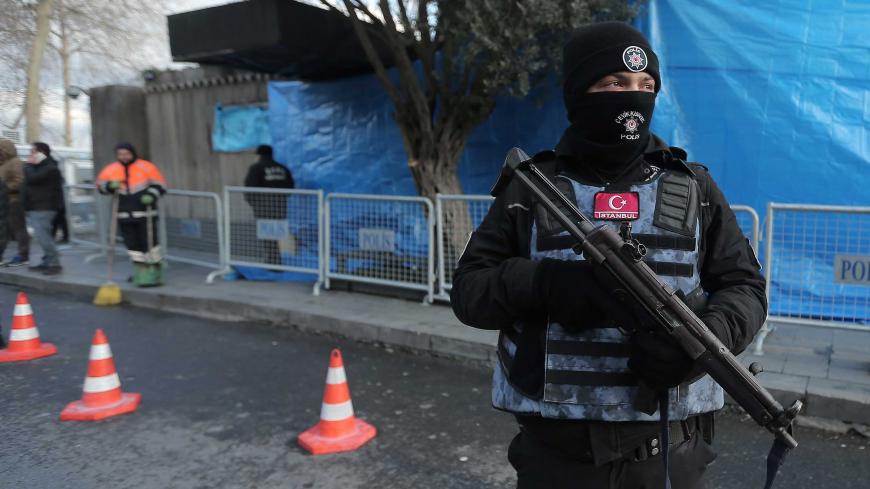 Turkish police stand guard outside the Reina nightclub in Istanbul after it was attacked by a gunman who killed at least 39 people, Jan. 1, 2017. - REUTERS/Huseyin Aldemir

Since the Jan. 1 nightclub attack in Istanbul, the Turkish government has perceptibly ramped up its struggle against extreme Salafi-jihadi networks in Turkey. This struggle by Turkish intelligence and the security establishment against the Islamic State (IS) and al-Qaeda-affiliated networks of Hayat Tahrir al-Sham — which is particularly active in Syria's Idlib province — lends added significance to the Turkish army’s intervention in Idlib about a month ago. The operation in Syria was not a unilateral move, but part of the de-escalation zone project agreed to with Russia and Iran in the Astana peace talks. That aside, it also comes with domestic security benefits.

Ankara’s amplifying of its struggle against Salafi-jihadi networks inside Turkey can be deduced from the number of operations conducted and suspects detained. Security sources told Al-Monitor that in 2016, Turkey detained some 2,700 people on suspicion of being Salafi-jihadis, while this year by October, some 4,000 people had already been detained. The number of operations so far this year have doubled compared with 2016 figures. Security sources noted that security operations have only been targeting violent networks and that nonviolent networks with significant popular bases of support have not yet become a focus.

Security sources who requested anonymity due to the sensitivity of the situation said their operations have become more successful than in the past because of improved intelligence gathering. As Turkish intelligence elements have become more embedded in al-Bab, Idlib and elsewhere in Syria, they have been able to collect more information about sleeper cells in Turkey. Sources have also noted that the decline of IS and Hayat Tahrir al-Sham in Syria and internal disputes among Salafi-jihadi networks in Turkey have resulted in their being more exposed.

Since early October, when the Idlib operation was launched, Turkey has frequently been waking to reports about Salafi-jihadi networks in the country. The latest concerned 30 operations launched Oct. 27 in 10 provinces that resulted in the detention of some 200 extremist Salafists.

One recent operation, on Oct. 27, was particularly noteworthy. It began with suspicious explosions in two houses in the Arnavutkoy and Esenyurt neighborhoods of Istanbul. The following day, four people, including two women, were apprehended while leaving two explosives-laden vehicles in a parking garage at a shopping mall in the Bayrampasa district of Istanbul. Two of those arrested were found to be Austrian citizens of Turkish origin who had been living in Istanbul’s Arnavutkoy district for the past five years. Their connections in Austria are under investigation. In addition to the two cars packed with explosives, a bomb-laden motorcycle was also seized, and a total of 66 homemade explosive devices with remote-control detonators were found in various vehicles. A search of the mall where the suspects were caught revealed four microwave ovens packed with explosives.

Two Salafi-jihadi cells had been planning to carry out a massive, multi-phased attack at the mall. They had bought four microwave ovens from a store in the mall, packed them with explosives and then returned them, complaining of problems with the appliances. The store clerks accepted the ovens, but did not examine them before setting them aside. According to the plan, the ovens would be detonated by remote control, and as people fled in panic, the cars and the motorcycle would be detonated. In the final phase, suicide bombers were to mingle among the crowds gathering to help and detonate their explosive vests.

Security source said the explosives in Arnavutkoy and Esenyurt were supposed to distract the police from the mall operation. It is possible the suspects had been hoping to cause mayhem and bloodshed in Istanbul on Oct. 29, Independence Day. A security source said they are trying to identify additional cells that may have been involved in the four-pronged operation based on clues found in the area.

So what pushed Ankara to buttress its struggle against violent networks linked to IS and Hayat Tahrir al-Sham in 2017? The answer may be in the public’s reaction to the Istanbul nightclub attack and its impact across the country.

The first IS attack in Turkey in March 2014, in the central Anatolian province of Nigde, and the 14 other large-scale IS attacks that followed faded from the public eye relatively quickly. The nightclub attack, however, has remained on the national agenda because of the debate it generated over lifestyles, religion, secularism and the existence of Salafi-jihadis in Turkey.

The debate also raised questions about the attitude of the ruling Justice and Development Party government toward Salafi-jihadi networks. Added to all the mix was the assassination of Andrei Karlov, Russia’s ambassador to Turkey, in December 2016 by a Salafi-jihadi. The killing put Ankara under intense international pressure, especially from Russia, to take action against violent, extremist networks.

It is not a leap to suspect that Salafi-jihadis will move to make life difficult for President Recep Tayyip Erdogan and his AKP government leading up to the 2019 presidential elections. Ankara already knows well that it will not be able to root out extremist violence in the country, but it can hardly be expected to soften its attitude toward domestic threats. The army is therefore continuing to conduct sensitive operations in Idlib that include intelligence gathering to help minimize the impact of extremist networks.