Was wedding blast in Gaziantep revenge for IS defeats in Syria?

Some suspect the Aug. 20 suicide bombing of a Kurdish wedding party in southern Turkey was the work of the Islamic State avenging its recent losses in Syria. 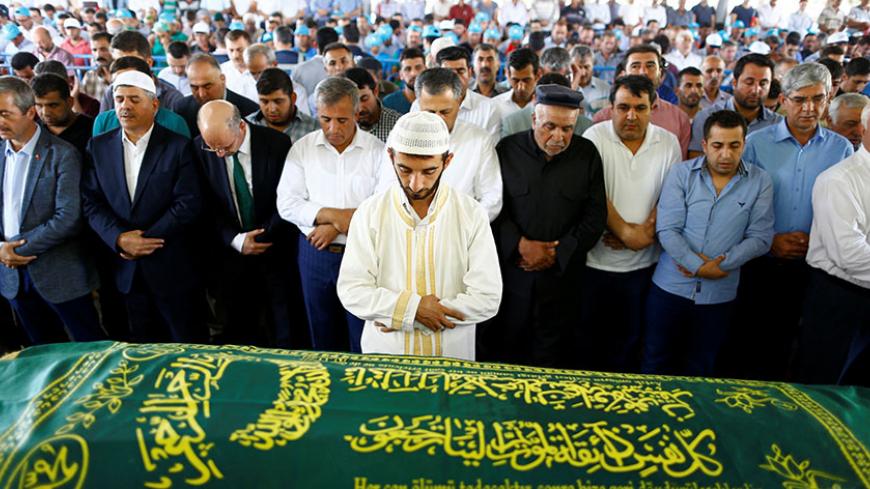 Family members and friends of Kumri Ilter, one of the victims of the Aug. 20 suicide bombing at a wedding celebration, attend her funeral ceremony in the southeastern city of Gaziantep, Turkey, Aug. 22, 2016. - REUTERS/Osman Orsal

GAZIANTEP, Turkey — A festive rumble echoed through the mainly Kurdish neighborhood of Beybahce in Gaziantep late on Aug. 20, belying the impending carnage. A “henna night” — a traditional party preceding weddings — was underway in the streets, attended mostly by women and children. Kurdish folk dances were in full swing and the henna ceremony was just to begin when an explosion ended the music. A suicide bomber had blown himself up among the crowd, leaving behind a bloodbath, with torn body parts littering the ground and people screaming for help.

The style and target of the attack pointed to the Islamic State, and Turkish officials soon singled out the jihadist group as the perpetrator.

The aftermath of the bombing was marked by anger and indignation among Kurds — anger because it was the latest in a string of IS-linked attacks targeting Kurdish civilians in Turkey, and indignation at what they felt was some Turks gloating at their plight. To amplify the grief, most of the 55 victims were children, and a small red shoe pictured among the debris became a poignant symbol of the tragedy.

The family hosting the party were identified as sympathizers of the Kurdish Peoples’ Democratic Party (HDP), adding a political dimension, and some have accused HDP lawmakers of exploiting the tragedy.

Political tensions were palpable at the funeral of the victims the following day, when a group of mourners booed ministers and lawmakers of the ruling Justice and Development Party who had come to attend the ceremony. As the imam led the prayers, the 30-odd small coffins punctuated the gloom and the wailing of Kurdish women pierced the air. It was clear from the women’s dresses, the cloths placed on the coffins and the slogans the crowd chanted that the mourners were a Kurdish community supportive of the HDP, the standard-bearer of the Kurdish political struggle in Turkey.

Three other major bombings blamed on IS have targeted Kurdish civilians and pro-Kurdish activists over the past year. The first hit a pre-election HDP rally in Diyarbakir in June 2015. The second targeted a solidarity group on its way to Kobani in Suruc the following month and the third wreaked havoc in downtown Ankara in October as thousands of both Kurdish and Turkish activists gathered for a peace rally.

Why are the Kurds being targeted, people asked each other as they buried their dead in Gaziantep.

Mehmet Emin Ozdemir, a mourner bidding farewell to a friend, asked pointedly why Kurdish gatherings and not others were vulnerable to IS attacks. Wiping his eyes, he told Al-Monitor, “I have questions buzzing in my head that I’d like to ask the authorities. For more than a month, democracy rallies were held across Turkey [after the July 15 coup attempt], and not a single shot was fired, not a single bomb exploded. Not that I want bombs to explode, they must not. Yet, why is it that nothing happens when government supporters take to the streets, but bombs explode when the Kurdish people go out for weddings or rallies? Hundreds of young Kurds like me are curious about this. If anyone has a logical answer, we’d like to hear it.”

Some mourners charged that Ankara was tacitly backing IS. Others blamed the bloodshed on intelligence failures. Abuzer Yavuz, who was among the first to run to help the wounded after the blast, believes the attacks were meant to intimidate and subdue the Kurds. “If people of this mentality think they can suppress the will of a people through bomb attacks, they are mistaken. They can never bully our people,” Yavuz told Al-Monitor. But the targeting of a Kurdish-populated neighborhood has brought Kurdish patience “to the point of running out,” he added.

The multilingual neighborhood, home to people of several different ethnic backgrounds, was united in grief, damning the perpetrators and extending condolences to the Kurds. Elsewhere, however, feelings of enmity prevailed. A group of men brandishing Turkish flags and chanting nationalist slogans tried to disrupt the funeral of two victims who succumbed to their injuries two days after the attack, sparking an altercation at the cemetery and prompting the security forces to intervene.

Back to the oft-asked question about the motive of the attack: Its timing suggests revenge for Manbij, the northern Syrian town that IS had to cede to a Kurdish-led coalition a week earlier after more than two months of heavy fighting. Attacking a mainly Kurdish neighborhood across the border could have been IS’ answer to the Kurds, which it likely holds responsible for its defeat.

The IS defeat in the lengthy battle for the Syrian Kurdish town of Kobani in January 2015 was followed by similar attacks in Turkey — the bombings in Diyarbakir and Suruc — suggesting that the jihadist group is targeting Kurds inside Turkey to avenge its failures against Kurdistan Workers Party-linked Kurdish forces in Syria.

Yet no matter what the motive was, the Gaziantep attack has left a deep scar on Turkey’s Kurds — not only because of the heinousness of the attack but also for the way Ankara and their Turkish compatriots reacted. The condemnations were seen as feeble. No period of national morning followed and no minutes of silence were observed at sporting events. In the words of a Kurdish mourner at the funeral, “The TV keeps broadcasting the Olympics. The dead are Kurds, after all.”