Turkey’s Kurds have united in grief over the perplexing killing of celebrated human rights lawyer Tahir Elci, whose loss some take as a sign that peace is further out of reach than ever. 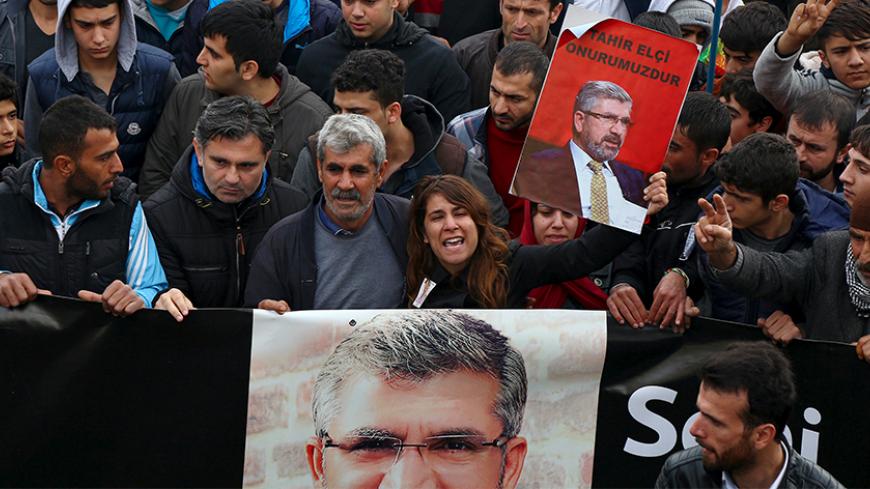 DIYARBAKIR, Turkey — The stronghold of Kurdish nationalism in Turkey, Diyarbakir has suffered violence and bloodshed for decades. But rarely have there been moments comparable to the state of deep collective grief and shock that gripped the city after the Nov. 28 killing of Tahir Elci, the head of the local bar association, a greatly respected human rights lawyer and an influential voice of moderation in the Kurdish community.

In cloudy, gray weather that only punctuated the gloom, an estimated 100,000 people took to the streets Nov. 29 to bid farewell to Elci in a long march from the morgue to his final resting place. Anger and grief mixed on the faces of mourners, most of whom never knew him personally. Everybody, however, was familiar with Elci’s long struggle for rights and the law, unrelenting advocacy of dialogue and peace and bold criticism of both the Turkish state and the armed Kurdistan Workers Party (PKK) in a three-decade conflict that has claimed some 40,000 lives.

Gunned down in broad daylight in mind-boggling circumstances, Elci’s killing came amid simmering violence in the mainly Kurdish southeast and dealt a fresh blow to hopes for reconciliation and a peaceful settlement of the conflict. Reflecting the sense of despair among Kurds, mourner Murat Yuksel told Al-Monitor, “Whoever extends a hand for peace, they break off their hands.”

Moments before his death, the 49-year-old lawyer had spoken to the press outside a centuries-old mosque in Diyarbakir’s Sur district, the ancient heart of the city, to draw attention to the damage historic sites sustained from clashes in the area, where police have been battling militants of the PKK’s urban wing entrenched in residential neighborhoods.

Part of what unfolded in a matter of seconds was caught on security cameras and by TV crews present at the site. At a busy street about 100 meters away, two suspected PKK militants shot dead two policemen and ran into the narrow cobbled street where Elci was speaking to journalists, with plainclothes police standing nearby to ensure the security of the press event. Perplexingly, both militants managed to run away, past the police who were shooting in their direction. Reminiscent of a Hollywood superhero, one of the men emerged unscathed from a hail of bullets and then threw his gun at an officer. The next moment, Elci is seen in the footage face down on the ground, hit by a single shot in the neck. Investigators have yet to determine who fired the bullet and whether Elci was accidentally or deliberately hit. In a further twist, however, the prosecutor handling the case has been kept from conducting a proper investigation, coming under fire several times at the site, apparently by PKK militants entrenched in the neighborhood.

Diyarbakir has been the scene of a series of unresolved and extrajudicial killings since 1991, when the first victim, prominent Kurdish politician Vedat Aydin, was slain after being abducted from his home. The remains of many victims have yet to be recovered, with the killings widely blamed on rogue elements of the state. Elci, whose killing many fear may also remain unsolved, had devoted his life to pursuing those extrajudicial killings and bringing their perpetrators to justice.

Many at the funeral believed that Elci was deliberately targeted and that the perpetrator was once again “the state.” In October, the lawyer had attracted nationalist ire when he said during a television program that the PKK, contrary to the way Ankara sees it, is not a terrorist group; this got him placed under investigation for spreading terrorist propaganda and a brief stint in custody. Other mourners, however, refrained from pointing an accusing finger at anyone, willing to await the outcome of the investigation into his death.

As the coffin — wrapped in the traditional Kurdish colors of red, yellow and green — arrived for the funeral ceremony at the city’s Human Rights Monument, the crowd erupted into a mix of slogans, the traditional Kurdish ululations of grief and defiant hand-clapping in honor of Elci’s life. “Martyrs never die,” the mourners chanted.

Selahattin Demirtas, the co-chair of the Kurdish-dominated Peoples’ Democratic Party, told mourners the killing was a “political murder.” He blamed it “not on the state but the statelessness,” sparking speculation over whether he was denouncing the state’s failure to protect Elci or issuing a veiled call for Kurdish statehood.

The slain lawyer’s widow, Turkan Elci, made an emotional speech, highlighting her husband’s struggle for human rights and efforts to shed light on extrajudicial killings. She described him as one of a “handful of doves” among “swarms of eagles, hawks and carrion crows,” and denounced the “dirty media” that “threatened” her husband and “pointed him out as a target” after his televised remarks in October.

The crowd grew bigger as the procession marched to the cemetery. Some brandished PKK flags chanting slogans for “revenge” while others walked silently holding portraits of Tahir Elci. People saluted the procession from windows and balconies, waving goodbye and throwing carnations.

For the first time since Aydin’s funeral in 1991, Diyarbakir stood united, setting aside political differences to honor a man of law and human rights. As one mourner remarked, “My 60-year-old mother had never taken part in a demonstration. She was so heartbroken that even she came to the funeral.”

A sense of despair lingered in the air as many saw Elci’s killing as an omen that peace is becoming an even more elusive prospect.

“It was a bullet fired at peace that orphaned the whole people. We owe him a lot for his efforts for peace,” Kadri Kavut, 47, told Al-Monitor.

Another mourner, Mehmet Tekin, 56, was more defiant. “I see this as an attack on the people. The Kurdish people cannot be silenced with such attacks. They are standing upright; no one can bring them down,” he said. “One Tahir is gone but thousands more will come,” he added, before breaking into tears.