Trial in Turkey over death of prominent Kurdish lawyer postponed

Court proceedings over the 2015 killing of human rights lawyer Tahir Elci were postponed Oct. 21 until March 2021 after defense attorneys requested the recusal of the trial’s judge panel. 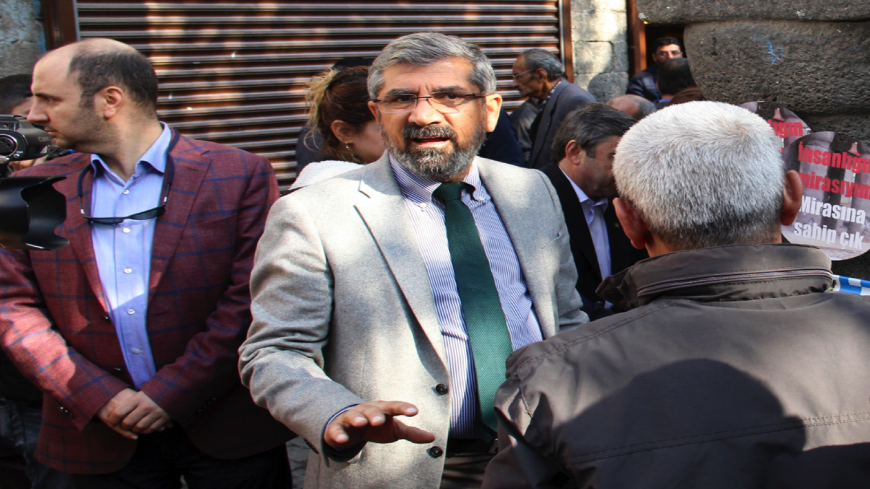 Kurdish lawyer and president of the Diyarbakir Bar Association Tahir Elci speaks just moments before he is shot dead, on Nov. 28, 2015, in Diyarbakir. The leading Kurdish lawyer was shot dead in southeast Turkey after unknown attackers opened fire on a gathering in the mainly Kurdish province of Diyarbakir, triggering a shootout with police, hospital sources and witnesses said. Elci died of gunshot wounds to the head, hospital sources told AFP. - ILYAS AKENGIN/AFP via Getty Images)

ISTANBUL – Five years after the death of prominent Kurdish lawyer Tahir Elci, court proceedings began Oct. 21 in which three police officers and one Kurdish militant are charged with killing the former chair of the Diyarbakir Bar Association.

Attorneys for Elci’s family claimed the trial was marked by abnormalities, requesting the judge panel recuse itself for not exhibiting “impartiality” after it rejected all their requests. The judges ruled to send the recusal request to an upper court for examination, postponing the trial until March 3, 2021.

Elci was shot and killed on Nov. 28, 2015, during a press conference in the Sur district of Diyarbakir, where he was protesting the rise of armed clashes between Turkish security forces and militants with the Kurdistan Workers Party (PKK) at the time.

Shortly after Elci began speaking, two PKK militants shot two police officers on an adjacent street and escaped toward the press conference. As the assailants ran by Elci, police officers at the scene fired a volley of bullets, one of which may have hit Elci in the head, causing his death.

Three police officers involved in the incident were charged with manslaughter by “foreseeable negligence” in a March 2020 indictment and face possible prison sentences of two to nine years. One of the PKK militants in the shooting, Ugur Yakisir, is accused of the intentional killing of two police officers as well as Elci’s death with the charge of “foreseeable intentional killing” and faces life imprisonment.

Turkish officials initially claimed Elci was caught in the crossfire between security officers and PKK militants, but the bullet that caused his death was never found, and a report by Human Rights Watch noted crime scene evidence was not sufficiently collected. Surveillance and press video footage from the incident also does not show the moment Elci was killed.

In a 2019 investigation of the event, the research group Forensic Architecture concluded a bullet fired by police most likely killed Elci, and it was unclear if any bullets were fired at the lawyer by Yakisir or Mahsum Gurkan, the other PKK militant at the scene, who is believed to have since died.

“As our original report made clear, there is absolutely no possibility that Ugur Yakisir or Mahsum Gurkan were responsible for the shot that killed Elci,” Robert Trafford, a research coordinator with Forensic Architecture. “The shot could only have been fired by one of the three officers identified.”

During the Oct. 21 proceedings, the three police officers testified through a video conferencing system used by Turkish courts known as SEGBIS. Lawyers representing Elci’s family complained the SEGBIS stations used by the police officers were not adequately staffed.

Basak Ertur, co-director of the Center for Law and the Humanities at Birkbeck - University of London, said normally a “delegate judge” is required to accompany defendants when giving remote testimony.

“The lawyers representing Elci’s family objected, saying that even the basic function of identification cannot be properly carried out under these circumstances,” Ertur told Al-Monitor.

The judge panel rejected the attorney’s request to delay the defendants’ testimonies along with other procedural requests from Elci’s family, of which his wife, Turkan Elci, was present and working as one of the lawyers on the case.

“I had full confidence in you until I came here," Turkan told the judge panel, which threatened to remove her from the court if she did not comply with instructions.

“What you have done has cast a shadow on your impartiality,” Karaman told the judge panel. “Even accepting this bill of indictment is a reason for your withdrawal. The state will make the Tahir Elci murder end in impunity, and you are being a tool for this."

Elci, who was 49 years old at the time of his death, was a long-time defender of human rights in southeast Turkey, often working on cases involving enforced discordances and killings by security forces in the 1990s. In 2015, he faced charges for making “terrorist propaganda” during an appearance on a Turkish television broadcast.

Emma Sinclair-Webb, Turkey director for Human Rights Watch, said the trial over his death was long delayed because the repeated replacement of prosecutors handling the file and proceedings would likely be politicized.

“The concern for all human rights defenders is whether the trial is conducted in a way that is really going to elucidate what happened in an even-handed and fair way, or whether it will seek to exonerate the police and cover up what happened,” Sinclair-Webb told Al-Monitor.