The clock has run out on Kurds' decadeslong efforts to resolve cases of kidnapping and murder from the 1990s, leaving hundreds of Kurdish families distraught. 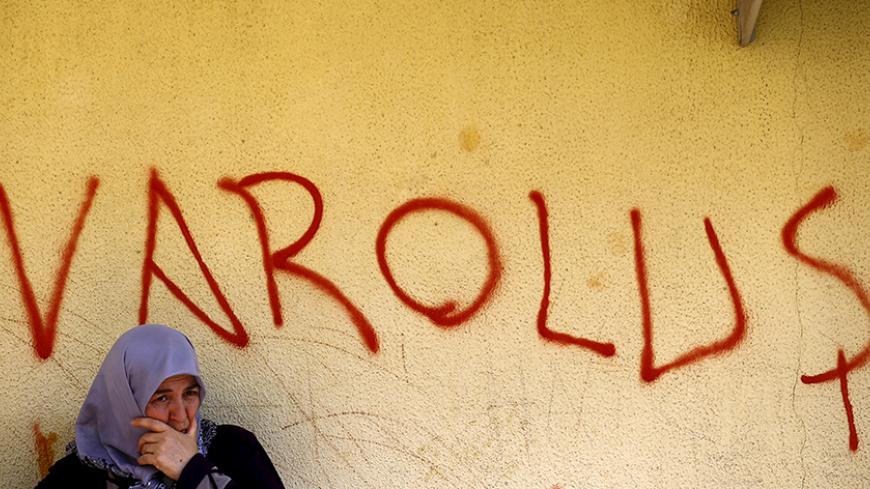 A demonstrator stands in front of a word written on a wall that reads "existence," as she waits for the start of a march in solidarity with the jailed leader of the Kurdistan Workers Party, Abdullah Ocalan, in Diyarbakir, Turkey, Aug. 1, 2015. - REUTERS/Umit Bektas

DIYARBAKIR, Turkey — For Nevzat Ozgen, a Kurd in his 30s, several simple objects in his home in Diyarbakir are more precious than anything: a flashlight, a lighter and a mukhtar’s seal. They are relics of his father, who remains without a grave after vanishing two decades ago. Ozgen’s father is among thousands of people who disappeared at the height of the Kurdish conflict in Turkey’s southeast, where bloody violence is simmering anew.

Fikri Ozgen, 72, was on his way to the pharmacy when he disappeared in February 1997. According to witnesses, the elderly man was forced into a car by four armed men and driven away. Such incidents occurred frequently in the 1990s as Ankara scrambled to suppress an armed insurgency led by the Kurdistan Workers Party (PKK). Men in plainclothes, believed to be members of the security forces, would force civilians into cars and whisk them away, with no word about their fate. Ozgen was never heard from again. Because of his advanced age, the family initially hoped he would be released and return home safe and sound. But their hopes faded as numerous petitions to the police, prosecutors and paramilitary police proved futile. No one would confirm they had Ozgen in custody.

Eighteen years on, the family is still waiting to know what happened. At one point, PKK defectors who had collaborated with the state claimed that Ozgen was killed at a military base. The family tried to follow up on the tip but to no avail.

Nevzat Ozgen believes his father was murdered in an act of intimidation — he had two sons with the PKK — and still hopes to find his remains. “We have been trying hard to find his bones, but will we be happy if we do, or will we cry? I don’t know. It is a dilemma,” he told Al-Monitor. “Still, I think, a little something from him can make us happy. What kind of happiness it would be, I don’t know. But when you have nothing, you remain suspended in constant anticipation.”

Saliha Bulut, a 45-year-old mother of four, shares a similar plight. Her husband, Fahri Bulut, vanished without a trace 20 years ago in a dramatic chain of events in which four other family members also disappeared. It all started on May 13, 1994, when soldiers detained Mustafa Bulut during a raid on the village of Kabakkaya, not far from Diyarbakir, according to witness accounts. The following day, Saliha’s husband was also detained and taken to an unknown location. The family mobilized to locate the two men, but not only did they fail to find them, they lost more of their own. While looking for the missing, three other men from the Bulut clan — Ekrem, Ramazan and Ali — were stopped at a checkpoint and detained by security forces, according to the family. Although they repeatedly petitioned the authorities, the fate of the five Buluts remained unknown until 2007, when the bones of eight people were dug up at a village in the district of Kulp. DNA testing confirmed three of the Buluts were among the victims buried at the spot.

The fates of Fahri and Mustafa Bulut remain unknown. The investigation into their disappearance closed in May 2014, when the 20-year statute of limitations expired. Saliha Bulut, however, remains adamant. “We want justice,” she said.

Raci Bilici, the head of the Diyarbakir branch of the Human Rights Association, said the answers to the disappearances ultimately lay in hundreds of suspected mass graves that human rights activists have identified across the southeast. He stressed, however, that the graves should be opened in line with the UN-approved Minnesota Protocol, a set of legal and medical guidelines for investigating extrajudicial killings.

“This will allow for thorough investigations, the collection of evidence and the identification of victims and how they died. Identification is supposed to be conducted through DNA tests, and the bones should be collected separately, without being mixed,” Bilici told Al-Monitor.

“Turkey, however, is not complying, and earth diggers are used to open graves. Bones are being mixed. We have objected to this practice and called for the implementation of international rules and scientific means. That was the reason why we objected to the opening of the graves,” he said.

According to Tahir Elci, the head of the Diyarbakir Bar Association, about 2,500 disappearance cases remain unresolved in Turkey, most of them in the mainly Kurdish southeast. Some efforts have been made in recent years to shed light on the extrajudicial killings that terrorized the population in the 1990s and were blamed on the rogue Gendarmerie Intelligence and Counterterrorism Unit (JITEM). Yet, many cases have been closed under the statute of limitations.

Elci is pessimistic that any further progress could be achieved, mainly because of unprecedented turmoil in the judiciary in the wake of large-scale corruption probes in December 2013. Claiming that the probes were a conspiracy plotted by members of the Fethullah Gulen community, the ruling Justice and Development Party (AKP) embarked on a massive purge in the judiciary and the police, where it claimed the Gulenists were entrenched.

“Certain efforts had been launched in the two or three years prior to [the corruption probes]. Twelve lawsuits were opened to salvage some major cases from the statute of limitations. … The investigation into JITEM’s murders had also made certain progress,” Elci told Al-Monitor. “But this realm was the one that suffered the heaviest blow from the great shake-up, crisis and chaos that followed in the judiciary after December 2013. The people involved in the investigations who were trying more or less to do something and collect evidence were removed from office, which effectively terminated the process,” he said.

Echoing a widespread conviction, Elci argued that after its fallout with the Gulenists, once a staunch ally, the government sought to stay on good terms with the military, which, in turn, led to connivance with military officials suspected of involvement in disappearances, extrajudicial killings and other crimes.

“While struggling against the Gulen community, the AKP deemed it unreasonable to open a front also against the army. … The investigation process into the grave crimes of the past has ended,” Elci said. “Neither are the prosecutors doing anything nor are the existing court cases advancing. The cases are being closed one by one, as if somebody has pressed a button.”

Drawing a gloomy conclusion, the lawyer said, “As someone who has closely followed this issue in the past 25 years, I can say the government and the state have closed this page. No intention or policy is left today to reconcile with the past.”

According to the Human Rights Association’s Diyarbakir branch, 348 suspected mass graves have been identified in 25 provinces, believed to contain the remains of 4,201 people.