A Kurdish politician who went missing amid bloody clashes in Turkey in May has turned up safe and sound in Iraq, sparking fresh controversy over his disappearance, which had mobilized human rights activists in Turkey. 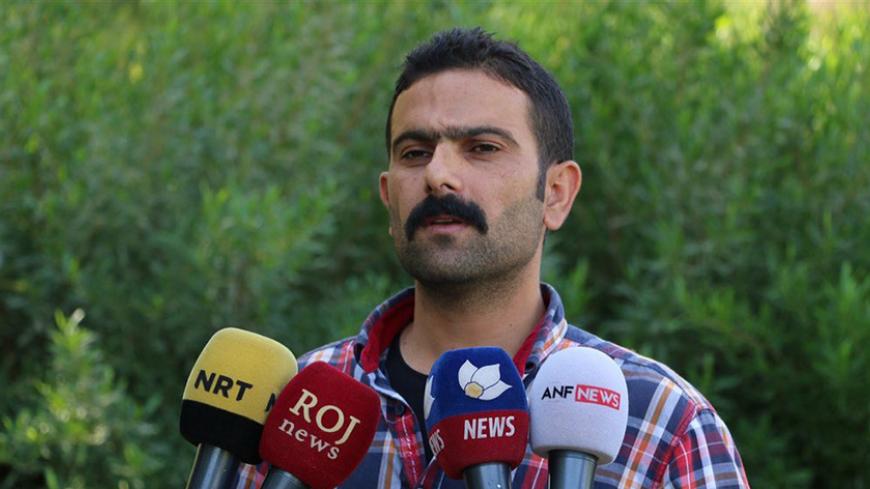 Hursit Kulter explains to reporters how he escaped from security forces and hid for 50 days, Kirkuk, Iraq, Oct. 7, 2016. - Twitter/@cdersim3

On Oct. 7, the Firat news agency ran an unexpected story: Kurdish politician Hursit Kulter was holding a press conference in the Iraqi city of Kirkuk, months after he went missing in Turkey’s mainly Kurdish southeast. Even the Kulter family was bewildered as they had lost hope he would ever turn up alive. Activists had mounted a vocal and unrelenting campaign of pressure on Ankara to explain the young politician’s disappearance, which had fueled fears that Turkey was returning to the 1990s, when arbitrary detentions and extrajudicial killings were almost a daily occurrence at the height of the Kurdish conflict in the southeast.

Kulter, a senior member of the Democratic Regions Party’s provincial branch in Sirnak, a province bordering Iraq, went missing May 27 amid fierce clashes raging in urban areas across the southeast between the security forces and militants of the Kurdistan Workers Party (PKK). According to Kulter’s account, the security forces held and tortured him in a basement in Sirnak for 13 days. He managed to escape and hide in empty buildings for 50 days before sneaking out of the city with the help of a “member of the resistance.” Because of safety concerns, he said, he could not inform his family and the press he was alive, and he apologized for keeping everyone in the dark.

“We were scared that we were returning to the era of extrajudicial killings in the 1990s,” Ebubekir Kulter told Al-Monitor after his brother reappeared in Kirkuk. The rogue conduct of the security forces in the 1990s left such a deep scar on Turkey’s Kurds that former Prime Minister Ahmet Davutoglu, campaigning ahead of the Nov. 1, 2015, elections, sought to lure Kurdish support with an eerie warning that extrajudicial killings would resume if his party was voted out of power. And days before Davutoglu spoke, Turkey had been rattled by a video compounding the fears. A friend of Kulter’s, Haci Lokman Birlik, was killed in the clashes in Sirnak and his body was filmed being dragged behind a police vehicle tied by a rope.

Moreover, Sirnak has witnessed the highest number of extrajudicial killings in Turkey after Diyarbakir. According to the Memory Center, an Istanbul-based advocacy group, at least 211 people forcibly disappeared in Sirnak province from the Sept. 12, 1980, military coup to 2013, including two prominent local politicians, Serdar Tanis and Ebubekir Deniz, who remain unaccounted for since 2001 after being summoned to a gendarmerie station. Just as in Kulter’s case, the authorities had denied the pair was taken into custody.

It was against this background that activists launched the “Where is Hursit Kulter?” campaign, which resonated strongly on social media and in the streets. Kulter’s reappearance has now sparked a wave of vitriol, especially in pro-government quarters, which claim the whole affair was staged to smear Ankara. Hurriyet columnist Ahmet Hakan called Kulter “a vile” person who has discredited human rights defenders. “No one will be now able to ask questions about people disappearing in custody,” he wrote, “because this man has made fools of all those who campaigned for him, including myself — all those who kept asking, ‘Where is Hursit Kulter?’ and harangued that the state had killed Hursit in his prime.”

For Emirhan Uysal, the head of the Sirnak branch of the Human Rights Association (IHD), which was the first group to bring up Kulter’s fate, this point of view is “morbid.” He told Al-Monitor, “Were we supposed to find his bones to consider this campaign a success? We wanted him to turn up alive, didn’t we? And he did turn up safe and sound!” Uysal noted the clashes in Sirnak had forced many government agencies to relocate and an apartment building was used to keep detainees. “It seems he found a way to escape in the midst of the fighting,” Uysal said. “There are many other people who remain in custody and their safety is a concern to us. We must ask questions about their fate as well.”

The claim that Kulter was detained originated from an anonymous Twitter handle believed to be used by members of the security forces. Late on May 27, it tweeted that Kulter “was caught with his gun in a sewage pit” and described him as a senior, undercover member of the PKK. Because the handle had shared insider information before, activists took the claim seriously, and the IHD petitioned the prosecutor’s office about Kulter’s fate.

Uysal said the requests for investigation remained unanswered, leading them to take the issue to the UN Committee on Enforced Disappearances and then to the European Court of Human Rights.

Sezgin Tanrikulu, a human rights lawyer and a deputy for the main opposition Republican People’s Party, had pressed the issue in parliament. “For me, pursuing Kulter’s fate was a moral responsibility not only as a politician but also as a human rights defender. Yet we failed to obtain any information from the government, including on whether Kulter was detained or not,” Tanrikulu told Al-Monitor. “Kulter had disappeared not in Switzerland, but in Turkey, a country with countless extrajudicial killings in its past. It was only natural that his family and human rights activists were alarmed, especially since he had disappeared in Sirnak, where a curfew was underway.”

The said the curfew was a round-the-clock ban, declared on May 4 as the security forces cracked down on PKK militants holed up in residential areas. A city of some 92,000 people, Sirnak saw almost its entire population flee for the relative safety of rural areas. The Kulter family was not an exception.

Ebubekir Kulter told Al-Monitor the family went to a nearby village, but his elder brother, Hursit, stayed behind. Shortly before the Twitter post about his capture, Hursit Kulter had texted a distressed message to a friend, suggesting he was in danger. In early July, Ebubekir tried to return to Sirnak to check an unidentified body kept in a hospital morgue. The police, however, stopped him at a checkpoint at the city’s entrance. After a wait of about an hour, he was told “to go look for Hursit in the Cudi Mountains” — an insinuation that his brother had linked up with armed PKK groups based in the mountains.

In a matter of days, pro-government media also reported that Kulter was never detained and had fled to the Cudi Mountains, citing the account of an informant who Kulter managed to sneak out of Sirnak through the sewers.

Kulter also says he sneaked out secretly, but after 13 days in custody, meaning on June 10. The media reports appeared 28 days later, on July 7. The security forces deny any detention, but Kulter does seem to have reached Kirkuk after weathering a life-threating situation. A source privy to some details told Al-Monitor that Kulter had crossed to Iraq about two weeks before his press conference. “In all likelihood, he believed that any revelation he was alive would endanger his life,” the source said on the condition of anonymity.

Al-Monitor tried to reach Kulter himself, but was told his conditions do not yet permit him to give interviews. Family members said they were not able to contact him either. Many questions are still to be asked on how Kulter escaped, but the end result of this campaign, unlike many others in the past, has had a positive ending — Kulter is safe and sound in Kirkuk.