Turkey has stripped two more pro-Kurdish lawmakers of their seats in its ever-widening dragnet as pro-Kurdish politicians and their supporters take to the streets of Diyarbakir. 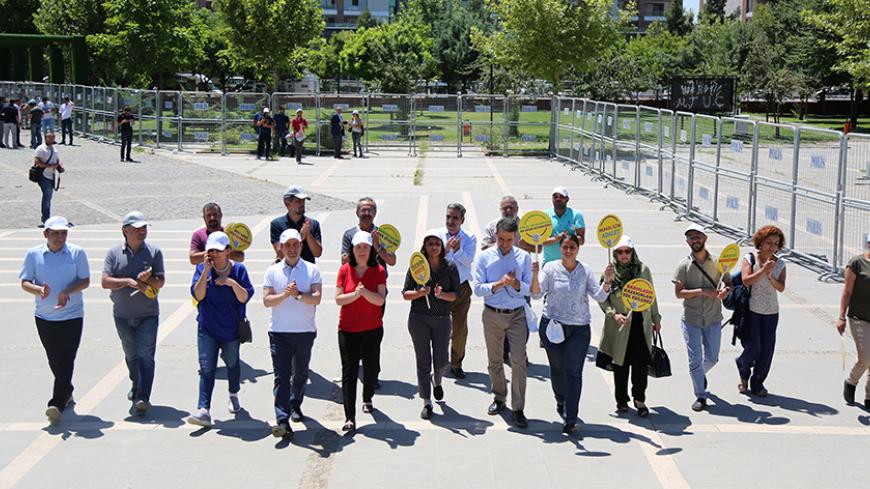 Pro-Kurdish opposition Peoples' Democratic Party lawmakers march with placards in Kurdish and Turkish during a protest against a state crackdown that has seen dozens of lawmakers and mayors jailed over suspected links to militant separatists, in Diyarbakir, Turkey, July 26, 2017. - REUTERS/Sertac Kayar

Turkey’s parliament broke another chip off the country’s largest pro-Kurdish bloc today, stripping two of its lawmakers of their seats over absenteeism. The move against Turkey’s third-largest party marks a first in the chamber’s history.

Tugba Hezer Ozturk and Faysal Sariyildiz of the Peoples' Democratic Party (HDP) lost their seats for failing to attend any parliamentary sessions since October 2016. Hezer, from Van province on the Iranian border, and Sariyildiz, from Sirnak on the Iraqi border, face a panoply of charges surrounding their alleged ties to the Kurdistan Workers Party (PKK). Both are believed to be in Europe.

Ozturk lost her seat by a vote of 324-20 and Sariyildiz by 328-29. The bulk of the ayes would have come from the Justice and Development Party (AKP), which holds 317 seats, and the balance from the far-right Nationalist Action Party, the AKP’s de facto coalition partner.

In February, the parliament stripped former HDP Co-chair Figen Yuksekdag and fellow HDP lawmaker Nursel Aydogan of their seats, also over alleged ties to the PKK. Yuksekdag is currently in prison together with 10 other HDP members of parliament, including the party’s magnetic Co-chair Selahattin Demirtas. Some 79 mayors belonging to the Democratic Regions Party, an HDP affiliate, are also in jail on assorted terror charges.

The parliamentary cull is set to continue as veteran Kurdish politician Leyla Zana’s head is readied for the block. Her crime is to have substituted the words “the great Turkish people” with “the great peoples of Turkey” to convey her contempt for the exclusionist language in the parliamentary oath at a swearing-in session in November 2015. The parliament speaker declared her oath invalid and demanded she retake it using the prescribed wording. Zana refused. She is now expected to lose her seat over absenteeism as well.

If she does, it will further illustrate how the AKP has come full circle from championing pro-Kurdish reforms in its early days to enforcing the suffocating Turkish nationalism that it once opposed. Zana more than any other in recent times has come to symbolize the Kurds’ struggle to decriminalize the use of their ancient tongue. In 1991, when she was elected to the parliament for the first time, she addressed the inaugural session in Kurdish, provoking a furor. Three years later, she and seven fellow Kurdish deputies were stripped off their seats and jailed on terror charges, deepening the chasm between Turks and Kurds. Ironically, Zana has advocated dialogue with the AKP, prompting grumbles within her own party.

A set of bylaws are being debated and expected to be adopted tonight that will effectively forbid members from using certain words and phrases such as “Kurdistan” or “Armenian genocide” during legislative sessions. The rules, spearheaded by the AKP and its nationalist allies, state that members cannot use expressions that are “in violation of the administrative structure” as defined by the “indivisible wholeness” of the Turkish state. Those who violate the bylaws could face expulsion for three sessions and a two-thirds cut in their salary.

Ordinary Kurds are feeling the heat as well. Mesut Gokhan, an inmate at a jail in the southern border province of Kilis, was allegedly tortured by prison guards after they intercepted a letter addressed to him written in Kurdish. HDP lawmaker Leyla Birlik has petitioned the parliament to investigate claims that wardens beat the soles of Gokhan’s feet so badly that he could not walk. He was denied medical treatment and put in solitary confinement. Birlik faces up to 37 years in prison herself over alleged membership of the PKK. The “evidence” against her includes taking part in the 2015 funeral of her brother-in-law Haci Lokman Birlik, a Kurdish activist who authorities insist was killed while attacking police with a rocket launcher and the HDP says was executed by the police. Images of his corpse being dragged by a police vehicle in Sirnak provoked an outcry.

“In today’s Turkey there are those who still want to return to the 1930s politics of denial that define Kurds as ‘mountain Turks’ and want to forcibly assimilate them,” observed Tarik Ziya Ekinci, a doyen of Kurdish politics in Turkey.

Early signs of the government’s hardening stance in the parliament came in January, when ethnic Armenian HDP lawmaker Garo Paylan was expelled from the chamber for bringing up the 1915 killings of Ottoman Armenians. As Al-Monitor contributor Mahmut Bozarslan reported, the HDP is protesting the clampdown against it by organizing a weeklong sit-in in the Kurds’ unofficial capital, Diyarbakir.

Unsurprisingly, the protesters are being obstructed by security forces who have blocked access to the park where the lawmakers are keeping their vigil. Democratic Regions Party official Ramazan Tunc told Al-Monitor, “The assault on our parties is unremitting. At least 10,000 members and activists are in jail. It is a sign of our people’s unyielding support that we continue to survive.”