Kurdish politicians are staging peaceful sit-in outside Ankara's Constitutional Court to protest the rampant jailing of pro-Kurdish lawmakers and politicians. 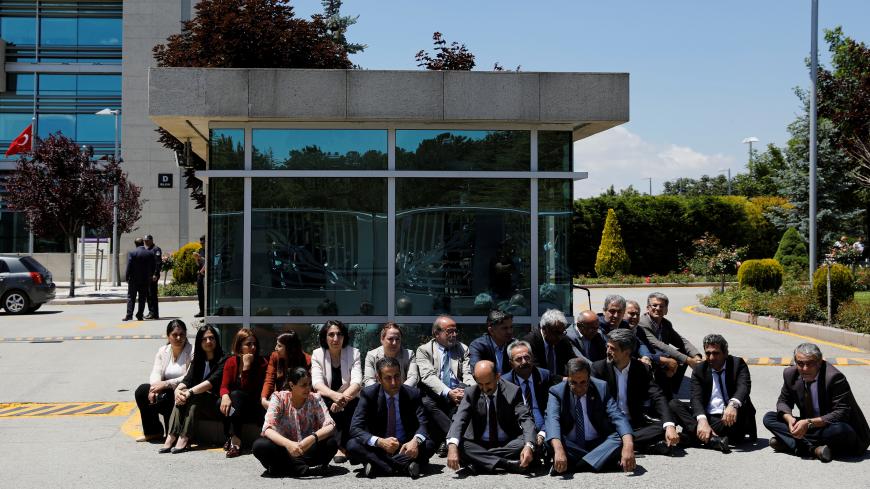 As Turkey’s top Kurdish lawmakers continue to rot in jail over thinly documented terror charges, fellow politicians have launched a sit-in outside the Constitutional Court in Ankara to protest their plight.

Osman Baydemir, a spokesman for the country’s largest pro-Kurdish bloc, the Peoples' Democratic Party (HDP), said, “There is one reason that we are gathering outside the Constitutional Court today. … It is to demand justice.”

Baydemir noted that HDP Co-chair Selahattin Demirtas and 10 other HDP lawmakers have spent “306 days being unlawfully held hostage under orders from the [government].” The move is the latest in a series of peaceful protests organized by the HDP to raise awareness over the imprisonment of its parliamentarians and hundreds of other pro-Kurdish politicians, including 85 popularly elected mayors.

One of the HDP lawmakers taking part in the sit-in said the Constitutional Court had “failed in its duties of overseeing the fair conduct and implementation of justice in the country.” Meral Danis Bestas told Al-Monitor, “We have two appeals pending with the Constitutional Court. The first is related to the May 2016 stripping of the parliamentary immunity of our elected members. The other is to do with their November 2016 arrests. The Constitutional Court has yet to deliver its opinion and we demand to know why it’s taking so long.” The HDP wants to take the cases to the European Court of Human Rights in Strasbourg but cannot do so until the Constitutional Court rules on them. “The delay seems like a deliberate attempt to delay justice,” Bestas said.

Justice has been in ever shorter supply ever since Turkey’s ruling Justice and Development Party (AKP) imposed emergency rule in the wake of last summer's failed coup. The government has used these powers to jail tens of thousands, most over alleged links with the putschists. But emergency rule has also served as cover to crush the HDP and its affiliates and to erase all manifestations of Kurdish nationalist identity in the provinces and districts they ran in the mainly Kurdish southeast region.

Demirtas, who was arrested on Nov. 3 last year on charges of establishing and leading a terrorist organization, among others, faces up to 142 years in prison for allegedly instigating violence that resulted in the deaths of four Kurdish youths in Diyarbakir in September 2014. The youths, thought to be sympathetic to the pro-Islamic party Huda-Par, were killed during mass protests that erupted in the city over the government’s perceived complicity with the Islamic State when the jihadis laid siege to the Syrian Kurdish town of Kobani.

Demirtas is being tried in 20 other cases for allegedly insulting President Recep Tayyip Erdogan and the Republic of Turkey, and for resisting laws regulating public protests. Turkey’s most popular Kurdish politician is among Erdogan’s biggest bêtes noires for opposing his now fulfilled ambitions of scrapping Turkey’s parliamentary system in favor of an executive presidency during the June 2015 parliamentary elections.

With his biting wit, youthful good looks and calls for a democratic and united Turkey, Demirtas won over hundreds of thousands of non-HDP voters who helped to propel the HDP into the parliament for the first time in 2015. The AKP lost its parliamentary majority, another first since catapulting to power in 2002. A furious Erdogan sabotaged his own party’s attempts to forge a governing coalition, forcing a new round of elections in November 2015. The AKP handily won these thanks in no small part to the collapse in July of a 2½-year cease-fire that had been mutually observed by Kurdistan Workers Party (PKK) rebels and security forces.

The government has since been demonizing Demirtas and the HDP, casting them as pawns of the PKK. Prominent human rights lawyer Erdal Dogan believes the end goal is to strip Demirtas of his parliamentary seat. “They want to defang him,” he told Al-Monitor.

Three HDP members, including Co-chair Figen Yuksekdag, who is also in jail, have already been stripped of their seats.

The most prominent case against Demirtas, over the Kobani riots, remains bogged down in intrajudicial squabbles. As a result, Demirtas has not yet appeared in court. Mahsuni Karaman, who is representing Demirtas, said, “Nobody wants to prosecute Demirtas because the sin is too great.”