A young Kurdish politician, Hursit Kulter, has been missing in Turkey since late May, reviving memories of arbitrary detentions and extrajudicial killings during the height of the Kurdish conflict in the 1990s. 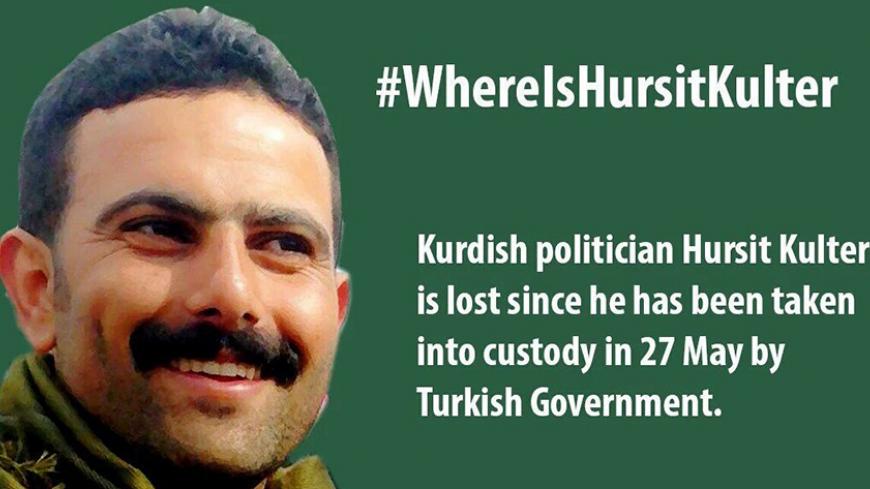 Campaign poster to raise awareness about the disappearance of Hursit Kulter. - Facebook/Kurdistan News

DIYARBAKIR, Turkey — It was May 26, and fierce clashes were underway between the security forces and urban Kurdish militants in Turkey’s southeastern city of Sirnak. The Kulter family, which had fled the city, got an unsettling text message from their 32-year-old son Hursit, a senior local member of the Kurdish Democratic Regions Party (DBP), who had stayed behind at home. “They are coming closer. Give me your blessing,” read the message, which was to be their last communication with him.

The next day, an anonymous Twitter handle believed to be used by members of the security forces posted a derisive message suggesting Kulter was being held in an armored vehicle and interrogated. The family quickly contacted the prosecutor’s office and then the police, the military and anyone they could think of, but the answer never changed: No one by the name Hursit Kulter had been detained.

As time passed, the family’s apprehension grew. Having been through the height of the Kurdish conflict in the 1990s, they knew such disappearances did not bode well. According to human rights activists, about 2,500 cases of disappearance remain unresolved in Turkey, most of them in the mainly Kurdish southeast, where arbitrary detentions and extrajudicial killings terrorized the population on a daily basis two decades ago.

Kulter’s disappearance soon became a matter of national public interest. Parliament members from the pro-Kurdish Peoples’ Democratic Party (HDP) brought up the issue with competent ministers, campaigns were launched on social media and protests were staged, but to no avail.

HDP co-chair Selahattin Demirtas claimed the young politician’s disappearance was meant to intimidate Kurdish youths standing up against oppression. “They are trying to give a message to Kurdish youths who may consider joining the resistance. … They are telling them, ‘This is what is going to happen to you, and you can do nothing about it and no one will look out for you,’” Demirtas said.

So far, the only concrete move has come from the Sirnak police, which last month invited the family’s lawyers to examine police premises to see that Kulter was not held there.

Lawyer Seyma Urper told Al-Monitor the visit could not take place because of the dire security situation in the region. The lawyers have lodged applications with the European Court of Human Rights and the UN Working Group on Enforced or Involuntary Disappearances to intervene, but they are still awaiting action, according to Urper.

The second of 11 siblings, Kulter landed behind bars in 2009 as part of a massive crackdown on Kurdish activists in the southeast. While in prison, he enrolled in a distance-education program and studied international relations. Following his release two years ago, he returned to the Kurdish political scene in Sirnak, only to meet the fate of two of his predecessors, Ebubekir Deniz and Serdar Tanis, who have remained unaccounted for since 2001.

Officials have raised the possibility that Kulter may have joined the outlawed Kurdistan Workers Party (PKK) and gone underground. Yet his brother Cihat Kulter says that the family has no information to that effect and that the claim should be investigated.

“We have no idea whether or not he has [joined the PKK]. If such a claim has been raised, we want to know why,” Cihat told Al-Monitor. He stressed the family was very much worried but was trying to keep its hopes alive. “Hopefully, we’ll have him safe and sound, even if he is being held somewhere,” he said. “There have been people who came up after going missing for a while.”

Cihat urged authorities to find those behind the social media accounts that claimed members of the security forces held his brother. “Those accounts may not be [official], but still they claimed Hursit Kulter had been detained. The state has the obligation to shed light on that,” he said, adding that the farewell message his brother texted was a clear indication he felt in danger.

“Even if he is not in custody, it is still up to the authorities to find what happened to him. My mother has the right to know that,” he said.

He recalled how the Justice and Development Party government had pledged to stamp out human rights violations in the southeast, including disappearances, when it came to power in 2002. “So the government must investigate what happened. Administrative inspectors have been assigned, but there has been no progress so far,” he said. “It wouldn’t have hurt that much even if he had turned up dead. We would have find solace in a grave.”

Kulter’s fate has been brought up in Washington as well. State Department spokesman John Kirby has urged Turkey to “give the UN and nongovernmental groups access to the [southeast] to document what is taking place” in the region, where a massive crackdown on the PKK since last year has left dozens of civilians dead and caused large-scale destruction in residential areas.

Urper, however, is losing hope that their efforts will succeed even with international pressure, given the sheer scale of rights violations committed during the security crackdown. “There have been so serious human rights violations during this process that, honesty, I don’t believe we’ll get a result,” the lawyer said.

Commenting on what could have happened to Kulter, she said, “We want to believe he is in custody and that the authorities refrain from acknowledging that because of the current circumstances.” Yet while acknowledging that all possibilities remain open, she stressed the authorities’ failure to provide an answer for such a long time deepened their pessimism. “The prevailing thought is that he was ‘disappeared’ after being tortured in custody,” she added.

Dozens of people killed in the security operations have been buried in potter’s fields because they could not be identified. The possibility that Kulter could be one of them has been eliminated through DNA tests.

The young politician may return safe and sound one day, or he may be found dead. The worst possibility, however, is the continuation of uncertainty. Just as in the case of Deniz and Tanis, who have remained missing for 15 years despite the accounts of witnesses who saw them entering a military garrison and other clues pointing to the involvement of the security forces.