Israeli politicians condemning the agreement with Iran have monopolized the conversation in Israel. 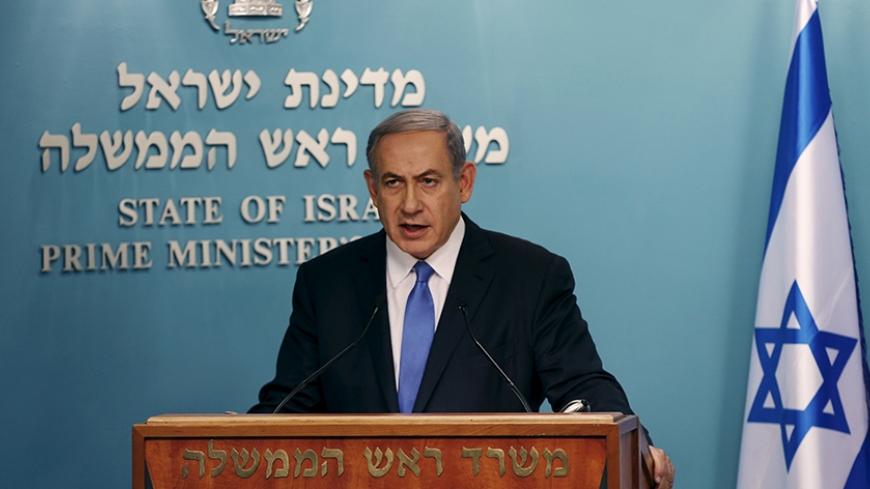 Israel's Prime Minister Benjamin Netanyahu speaks during a news conference in Jerusalem, July 14, 2015. Netanyahu said Israel would not be bound by the nuclear deal between world powers and Iran and would defend itself. - REUTERS/Ammar Awad

The widespread Israeli media coverage of the nuclear agreement between six world powers and Iran was accompanied by bitter cries of politicians from right and left alike who described the deal as a national disaster. This overpowered the important voices of those who argued that the agreement would actually improve Israel’s position, and not the reverse.

Two of the dissenting opinions are expressed by Isaac Ben-Israel — a reserve general, professor, chairman of the Israeli Space Agency and recipient of the Israel Defense Prize — and professor Ariel Levite, former deputy director general of the Israeli Atomic Energy Commission. These two experts wrote articles in which they presented the positive aspects of the agreement from Israel’s perspective. But their chances of garnering appropriate public attention were nil given the apocalyptic rage prophecies of the politicians.

From the moment the agreement was signed July 14, the Israeli public only heard one-sided commentary on the deal’s implications. The key personage who set the tone was, of course, Prime Minister Benjamin Netanyahu, who declared that the agreement paves Iran’s way to the atom bomb. But even the heads of the opposition parties, Zionist Camp leader Isaac Herzog and Yesh Atid leader Yair Lapid, also took part in the effort. They lambasted the agreement as threatening to Israel, and targeted Netanyahu as being responsible for the debacle. Lapid even demanded a national commission of inquiry to investigate the failures in foreign policy that led to the bad agreement (in his words). “We thought it would be a bad agreement, but it is even worse than we expected,” Lapid said.

There are not enough words to list the headlines created by ministers and Knesset members, high- and low-level ones alike, including those with very limited knowledge of nuclear matters. All of them acted in concert to explain to the Israeli public that the agreement signed in Vienna paralleled the notorious Munich agreement of 1938. Politicians from right and left all regarded condemnation of the agreement as a litmus test of their patriotism. They fear that any positive statement regarding the deal will turn them into an enemy of the people. That is exactly as shallow as it sounds. Even mainstream media that does not want to be viewed, God forbid, as left wing or Jew haters, contributed its part in setting the tone of this narrative. And when the public discourse is filled with hysterical tirades and shallow patriotism, it is no wonder that those on the other side are unable to make their voices heard.

Thus, Levite’s important and reasoned article in the Israeli daily Haaretz on July 17 was sidelined and had no influence on the public discourse, despite his credentials in nuclear matters. Levite, who is held in very high esteem as a nuclear researcher and who has closely followed the Iranian issue in recent years, wrote an article titled “The good, the bad and the ugly nuclear agreement.” In it, Levite clearly and concisely explained that while certain sections of the agreement cause justifiable worry in Israel (such as a hasty removal of the sanctions, a slow and convoluted supervisory apparatus and the almost immediate ability of Iran to upgrade its centrifuges), there are also sections that improve Israel’s position.

Levite argued that the positive change relates to the limitations Iran committed itself to in the agreement. “For a period of no less than 15 years Iran has undertaken not to enrich uranium beyond a low level, to eliminate or convert its significant stockpile of higher enriched uranium and to refrain from setting up any new enrichment facility, nor produce new centrifuges. Iran will also go down to a sole active uranium enrichment facility.” Levite also notes the sweeping prohibition on Iran to conduct research and development that could serve nuclear bomb projects and missile warheads.

Another person who tried to break out of the unified media chorus line was Ben-Israel. Ben-Israel is one of the greatest experts on the Iranian research program and its significance for Israel. In an article written for the Israeli daily Yedioth Ahronoth (and in an interview for the Walla website), Ben-Israel argued that the deal has several positive aspects. He said the agreement is not as dangerous as it is perceived by the Israeli public and decision-makers. “What we have here is a non-dialogue between people who don't want to listen. The agreement is not bad at all, it’s even good for Israel. … The United States' president said that the deal distances Iran from a nuclear bomb for a decade or two, and he is correct. It distances the threat for a long time, it averts an atom bomb for 15 years, and that’s not bad at all.”

Even former Mossad head Efraim Halevy, who has long maintained that Iran does not constitute an existential threat to the State of Israel, presented on Israeli state radio a more balanced view regarding the deal. At the margins of the public discourse can also be heard the statements of Amos Yadlin, the former chief of defense intelligence, and former Prime Minister Ehud Barak. All of these voices seemed to try to dampen the national panic.

Ben-Israel told Al-Monitor that he was disappointed over the way the important discussion of the nuclear deal has taken place in the media, and the lack of impact his words and Levite’s article had on the public. “This shows the great problem affecting the Israeli media. Our media is not a dictatorship media, yet no dissenting voice is heard. On the other hand, every junior Knesset member suddenly becomes a nuclear expert and explains why the deal is terrible.”

Ben-Israel uses no small measure of sarcasm when talking about politicians. “‘Dr.’ Yair Lapid and ‘nuclear expert’ Buji [Isaac] Herzog are fueled by political calculations. As far as the media is concerned, we evidently are unable to compete with the superior wisdom of deputy ministers who explain how terrible the deal is. It is no coincidence that the other side of the coin is expressed by professionals in the security system. Levite, Halevy and I were all very familiar with the [Iranian nuclear] issue.”