The case of the Bedouin Palestinian village of Khan al-Ahmar shows that sometimes, international pressure is the only way to confront Israeli injustices in the West Bank. 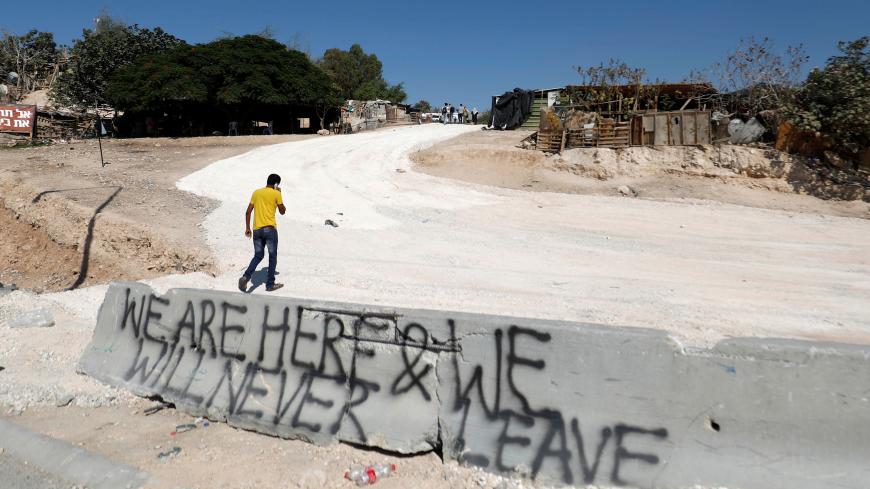 A Palestinian man walks in the Bedouin village of Khan al-Ahmar in the occupied West Bank, July 6, 2018. - REUTERS/Mohamad Torokman

On the backdrop of the protest by five European states, Israel’s Supreme Court ordered a stay in the razing of the Bedouin West Bank village of Khan al-Ahmar and the eviction of the 32 families living there. Justice Anat Baron’s temporary injunction on July 5 gave the state until July 11 to respond to the residents’ petition against the destruction of their homes and their relocation to an area near the village of Abu Dis east of Jerusalem.

The international interest in their small village and media coverage of the campaign by Germany, France, Spain, Italy and the UK more than likely provided residents of Khan al-Ahmar with the stamina to persevere in their decadelong struggle and to petition the high court once again after being turned away repeatedly.

Since 2009, the residents of Khan al-Ahmar have appealed to the court numerous times in a bid to force the state into an accommodation and prevent the destruction of their village. As recently as May 24, Israel’s top court — the same court that stayed the demolition order this week — rejected yet another petition and gave military authorities the go-ahead to raze the village within a month. Justices Noam Sohlberg, Yael Willner and Anat Baron (the same judge who now suspended the demolition) ruled that there was no legal basis for intervening in the 2017 decision by Defense Minister Avigdor Liberman to demolish the villages of Khan al-Ahmar and Susya in the Israeli-controlled part of the West Bank designated Area C.

The 170 residents of Khan al-Ahmar are members of the Jahalin tribe. In 1952, they were evicted from their lands in sovereign Israel near the southern archaeological site of Tel Arad, which the state turned into an area for live-fire military drills. They roamed about until reaching the Jerusalem hills, then under Jordanian control, where they settled. After Israel captured the area in the 1967 Yom Kippur War and established the settlement of Kfar Adumim and the industrial zone of Mishor Adumim on the land where they were living, they found themselves boxed in between the settlement and the industrial zone. They are currently living near the Dead Sea, their village divided in two by the busy Jerusalem-Jericho road.

For years, the Israeli Civil Administration refused to authorize the construction of permanent buildings in Khan al-Ahmar, not even of a school, and given no choice, residents built homes without permits. This infraction became the legal basis for the eviction notice they were served. According to the human rights organization B’Tselem, between 2006 and 2018 Israel demolished 26 homes, leaving homeless 132 people, among them 77 children and teens. With funding from Italy, Belgium and the European Union, the Italian nongovernmental organization Vento Di Terra built a school for the village children using mud and rubber tires.

Following the Supreme Court’s May ruling, the Civil Administration accelerated preparations for the demolition. All that was left for human rights organizations was to try to generate public protest within Israel against the injustice. B’Tselem argued that razing the village homes violates international law and constitutes a war crime. However, its protracted campaign and the many legal petitions were to no avail. On July 4, workers of the Civil Administration accompanied by police and heavy machinery dismantled part of the railings separating the village homes from the busy road and began paving an access road into the village to enable Israeli forces to carry out the eviction and demolition.

When it appeared that all the protest activity had failed and that the demolition was inevitable, opponents reverted to what has become both an option of last resort and the Achilles' heel of Israeli human rights organizations: mobilizing international pressure on Israel.

Israel’s main beef with the human rights organizations operating in the country is that they mobilize the support of foreign countries, mostly of European states considered supportive of the Palestinians, to exert pressure on the government and impose sanctions on Israel. Such activity generates strong resentment in Israel, not only on the part of the political right that regards the organizations as “Israel bashers” tarnishing the state’s image abroad.

Alon Liel, a former Israeli ambassador to South Africa and ex-director of the Israeli Foreign Ministry, reportedly once told representatives of the anti-occupation Breaking the Silence organization, “The sanctions on South Africa were imposed the minute public opinion understood that in South Africa, the black is the white and the white is the black. You are the vanguard telling the world that the occupation is insufferable for us and insufferable for them.”

His comments set off a storm of controversy and illustrated the dilemma faced by human rights organizations in Israel that believe the Israeli public has become indifferent to the human rights violations in the occupied territories and that change cannot be brought about the way things stand now, under the rule of a strong right-wing government.

Knesset members on the political right have been advancing a series of bills in recent years designed to restrain the activity of human rights groups and limit their funding by foreign governments and organizations. The legislation includes a law on NGO funding and the so-called transparency law instigated by Justice Minister Ayelet Shaked of right-wing HaBayit HaYehudi.

The case of Khan al-Ahmar proves that the human rights organizations are correct. Outside help is probably the only recourse left to those seeking to affect change. Since 2009, residents of the village have conducted public and legal campaigns, but the threat of demolition and expulsion remained. On the day five European countries threatened Israel with international condemnation and sanctions, everything ground to a halt. Even the Supreme Court overturned its own decision.