Israel’s Supreme Court has authorized virtually every violation of the Palestinians' rights brought before it. 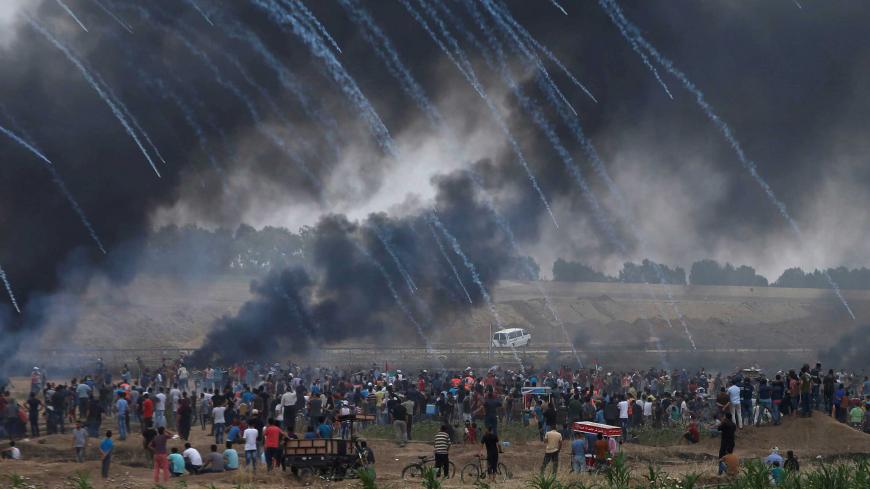 Tear gas canisters are fired by Israeli forces at Palestinian demonstrators during a protest demanding the right to return to their homeland, at the Israel-Gaza border, east of Gaza City, May 4, 2018. - REUTERS/Mohammed Salem

The latest confrontation along the Gaza border appears to bolster the prevailing argument in Israel that the conflict with the Palestinians is not rooted in any way to Israel’s occupation of Palestinian territory. Every Israeli is familiar with the following “facts”: Israel withdrew its settlements and forces from Gaza in 2005 and handed control to the Palestinian Authority, which was then ousted by Hamas in 2007. As thanks for evacuating thousands of Jews from their homes in Gaza’s Katif settlement bloc, Israelis have since been subjected to rocket barrages and attacks through tunnels. The 11-year Israeli siege that has turned Gaza into the world’s largest prison was only imposed to ensure Israeli security.

Only rarely, if at all, does anyone mention that Hamas rose to power in 2006 in democratic elections held under US pressure and with Israeli consent. Few ask how the export of vegetables from Gaza to Ramallah on the West Bank and the travel of Palestinian students from Gaza to their university in Bethlehem endangers the lives of Israelis. Israeli politicians have managed to inculcate Israelis with the notion that Gaza is an independent political entity and that Israel is not responsible for the fate of its 2 million residents.

Palestinians in Gaza are no longer counted in calculating the “demographic balance” of Jews and Arabs between the Mediterranean and the Jordan River and do not even merit lip service in discussions of the moribund Israeli-Palestinian “peace process.” Who even remembers that the 1993 Oslo Accords clearly stipulate that the West Bank and Gaza are one territorial entity, the integrity and status of which was to be maintained during the interim period leading to a final resolution of the Israeli-Palestinian conflict?

To understand the root of the conflict in the south of Israel, one has to go back to a 2012 debate about Gaza among Israeli politicians and defense officials. Maj. Gen. Eitan Dangot, head of Coordination of Government Activities in the Territories (COGAT), confirmed that the reason for the discrimination against the residents of Gaza lies in a “policy of separation” of Gaza and the West Bank. A COGAT spokesperson had said a year earlier in a newspaper interview that decisions regarding exports from Gaza were political in nature, and therefore only the Prime Minister’s Office could make them.

If further proof were needed to show that the Israeli siege is not defensive in nature but rather a means of separating the Palestinians of Gaza from their kin in the West Bank, the Israeli navy was dispatched May 30 to intercept a small boat that set sail from Gaza toward Cyprus. The vessel carried 15 human rights activists, students and sick Palestinians who had been denied permission to leave Gaza for medical treatment. They were armed to the teeth with Palestinian flags and protest signs against the Israeli occupation.

The barrage of Israeli commentary and slew of learned analyses generated by the violence that recently flared with Gaza did not mention the word “occupation.” The only remnant of the 1995 Oslo II Accord is the division of the West Bank into three areas of control (A, B and C), with Israel in total charge of 60% of Area C. Jewish settlers in area C enjoy virtually unfettered construction rights. The separation policy toward Gaza is a central component of the occupation policy in the West Bank. Israel’s Supreme Court, the institution that the conservative right seeks to portray as a branch of left-wing Meretz, has for years validated this separation and the occupation.

For years, the country’s top court has authorized the systematic theft of private Palestinian land for the construction of Jewish settlements, the demolition of Palestinian homes and public facilities, the building of a separation fence along and inside the West Bank and the paving of roads for Israelis only. There is an element of symbolism in the fact that on May 24, the court dismissed a petition by human rights organizations against Israel’s use of live fire across the border into Gaza to disperse Palestinian demonstrators, but allowed the government to raze homes in the West Bank Bedouin village of Khan al-Ahmar and expel its residents.

The decades-old Bedouin community living at the site numbers 173 people, including 92 minors. There is also a mosque and a school serving 150 children aged 6-15, about half from neighboring communities. They settled in the area after Israel expelled them from the region of Tel Arad, in the Negev Desert, and subsequently from the area where the settlement of Kfar Adumin now stands.

Justice Noam Sohlberg, a resident of the West Bank settlement of Alon Shvut, wrote in the court's opinion that the “construction in the al-Ahmar compound both of the school and the residents’ homes was illegal” and that was “an irrefutable” fact. Therefore, the justices ruled, the state was authorized to issue them with demolition orders.

Indeed, the structures went up without a license after years of failed attempts to obtain permits from the Israeli authorities entrusted with the sole responsibility of the well-being of the residents of Area C. To “encourage” the Bedouins to leave their homes, the state avoided connecting them to power, water and sewage facilities, and paving roads for them. The military’s civil administration repeatedly prevented the building of homes and community facilities at the site and restricted grazing areas for their flocks. On the other hand, illegal Jewish outposts, including settlements constructed on private Palestinian land, benefit within days, or weeks at most, from their establishment from all sorts of services provided by the Israeli administration. They are guarded. They are connected to the water system, and they receive health and education services.

The ruling by the court paves the way for the government to expand Jewish settlement in the area on the way to its de facto annexation, emptying of Palestinians and fragmenting the West Bank. As noted by the human rights organization B’Tselem, which has been witnessing for the Palestinian residents for years, the justices did not conceive of this policy or initiate it. The expulsion of the Khan al-Ahmar community is part of a long-term Israeli policy practiced in the territories it has occupied for 51 years. As in dozens of previous cases over the years, however, the Supreme Court has authorized virtually every violation of the Palestinians' rights put before it. B’Tselem asserts, “Personal liability for the commission of this crime will be not only that of policy-makers but also of those who paved the juridical route enabling it.”

Another human rights organization, Adalah, has compiled a list of 10 judicial rulings from 2015 greenlighting discrimination, racism and rights violations against the Palestinian citizens of Israel and those in the occupied territories. Meanwhile, the left-wing and centrist political parties have been portraying the legal system as an endangered species that must be protected against right-wing attempts to uproot it from its democratic habitat. The right-wing settlement establishment can thus enjoy the best of both worlds: perpetuating the occupation of the West Bank and the separation of Gaza while at the same to covering itself in a veneer of righteous democracy. In other words, it can excoriate Israel's legal institutions and at the same time enjoy their protection.