The Netanyahu government accelerates the demolition of Palestinian homes in East Jerusalem and the West Bank, while increasing construction in settlements. 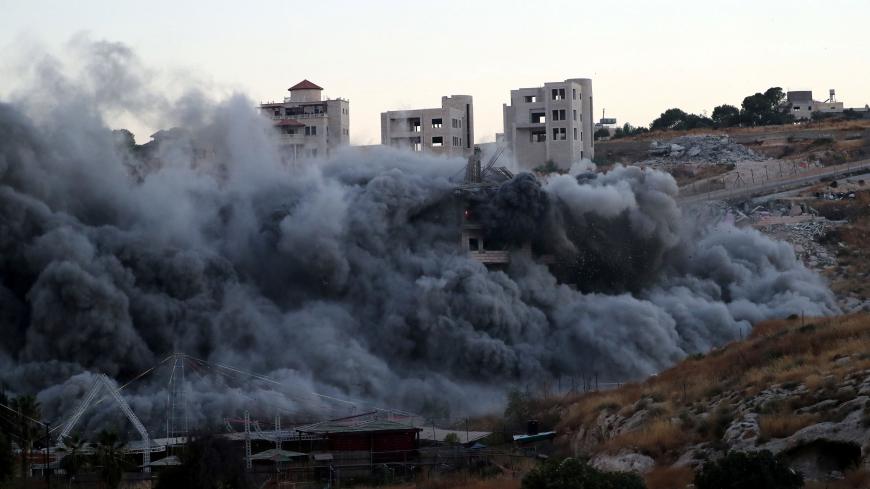 A Palestinian building is blown up by Israeli forces in the village of Sur Baher, which sits on either side of the Israeli barrier in East Jerusalem and the Israeli-occupied West Bank, July 22, 2019. - REUTERS/ Ammar Awad

On the evening of July 21, former Education Minister Naftali Bennett handed over control of the New Right party to his former co-chair and fastest rising star of Israeli politics, Ayelet Shaked. The two wasted no time and went off the next morning to tour their prospective constituencies. The decision to launch their election campaign in the Etzion settlement bloc in the West Bank, with activists of the radical right Regavim movement at their side, does not augur well for the campaign. Shaked complained to reporters accompanying her that the state was not allocating the right resources to stop “a massive takeover of Area C” of the West Bank, which is under Israeli control, by the Palestinian Authority (PA). She added that the next defense minister and prime minister should address this issue as “a national priority.”

Regavim, undeterred by the fact that one of its founders and driving forces Bezalel Smotrich was recently appointed as transportation minister, is going after the government at full blast. On July 19, it took out full-page newspaper ads headlined, “A Terrorist State - Just Around the Corner.” The text accused the government of “napping on the job” and allowing the PA to build 28,651 structures since 2012 in Area C of the West Bank, which is under full Israeli control as designated by the 1993 Oslo Accord, which the political right dubs “a criminal act." Regavim, whose representatives form part of Prime Minister Benjamin Netanyahu’s current transition government, are calling on ministers and Knesset members to “take immediate action to prevent a terrorist state in our backyard.”

The parties competing against the ruling Likud for right-wing voters are holding up the red rag of “Khan al-Ahmar,” the small West Bank Bedouin village slated for eviction under a court-sanctioned government order. In May, after the Supreme Court approved the government’s sixth postponement — under heavy international pressure — of the eviction, Regavim stated, “This is a test of the government’s willingness to counter the PA’s plan to take over uninhabited lands in Judea and Samaria” (using the biblical names of the West Bank). In January, the chair of Yisrael Beitenu party, Avigdor Liberman, said Khan al-Ahmar “symbolizes the takeover of state lands by the PA.” Two months later, Bennett demanded that Netanyahu reject international pressure and allow the planned eviction. “This is a state of law, do what you promised and raze Khan al-Ahmar,” the then-chair of the New Right party pontificated.

Human rights activists involved in the struggle against the village demolition told Al-Monitor this week they were readying for the evacuation to take place prior to the Sept. 17 elections. The activists, along with international organizations, were helpless in the face of the massive police forces that took control of the Palestinian Jerusalem neighborhood of Sur Baher on July 21, to make way for the bulldozers sent to tear down 13 buildings.

According to B’Tselem, one of the human rights organizations monitoring the affair, the demolition left 17 residents homeless, among them 11 minors. The demolished buildings in the part of the neighborhood known as Wadi al-Hummus, contained at least 44 apartments, most of them under various stages of construction. Some of them were built in Area A of the West Bank under total PA control, which even issued building permits for the project. Israel’s Supreme Court, however, accepted the government’s argument that the buildings’ proximity to the separation wall between Jerusalem and the West Bank constituted a security threat. B’Tselem now fears that the ruling gives Israel legal grounds to tear down many Palestinian-owned homes in East Jerusalem near the wall. It is safe to assume that the political right will not ignore the precedent-setting Sur Baher verdict by the country’s top court.

Just this month, on July 10, Netanyahu declared, “We will not let any community or town in the Land of Israel be evicted — neither Jewish nor Arab.” At an event in the West Bank settlement of Revava, the prime minister said, “We don’t forcibly evict people. We’re done with this nonsense. Israel under my leadership will not repeat the mistakes of the past.” At a September 2017 event in the Etzion settlement bloc, Netanyahu insisted, “The way to make peace is not through uprooting — not of Jews and not of Arabs.”

Until the hoped-for peace is reached, the prime minister is making sure to keep only half his promise. He does not uproot Jews. In recent years, the authorities have stopped evicting residents of illegal settlement outposts. What's more, even as the Civil Administration makes it virtually impossible for Palestinians to obtain building permits in Area C and bulldozes homes erected without permits, the authorities cooperate with the erection of new Jewish outposts in those same areas by closing their eyes to legal violations and in some cases even funding them. The anti-settlement Peace Now organization reports that 32 such illegal outposts have gone up since 2012, among them 21 farms that have taken over vast lands for their herds and crop cultivation. Fifteen of the 32 were “legalized” after the fact as stand-alone settlements or as “neighborhoods” of existing ones. An additional 35 illegal outposts erected over the years are in the process of retroactive legalization.

According to the report, most of the 32 newer outposts went up after US President Donald Trump’s election, two of them just recently after the April 9 elections under Israel’s transitional government. “All of the new outposts (except one) are located deep inside the West Bank, in areas that Israel will likely have to evacuate within the framework of a permanent agreement,” the report’s authors wrote. “Around some of the new outposts, there is an increase in violence and attacks against Palestinians."

However, Netanyahu need not worry about US pressure on Israel to implement the two-state solution to the conflict with the Palestinians. The head of the US peace team Jason Greenblatt is scheduled to visit Israel next week for talks with top officials (the Palestinians don’t count). When asked in a July 17 PBS interview about the two-state solution, he said, “You can't take a conflict as complex as this and boil it down to those three words.” He also rejected the term “occupied” in referring to the West Bank, suggesting instead “disputed,” and said he preferred subbing “neighborhoods and cities” for the word “settlements,” which he claimed was “pejorative.” According to the US president’s envoy, Israelis are actually the victims of the situation in the Middle East.

By ignoring Israel’s demolitions of Palestinian homes and its building of new settlement outposts, and by publicly airing Greenblatt’s convictions, the United States is burying what little is left of the so-called Israeli-Palestinian “peace process.” The validity of Trump’s proposed “deal of the century” — the panacea that protected Netanyahu against the vitriol of those for whom a fistful of earth is more sacred than human life — has long vanished into thin air.