In the southern West Bank Old City of Hebron, Palestinians built an iron fence in a number of alleys and squares to protect themselves from the stones and trash constantly thrown by settlers to drive them to leave for other Palestinian towns. 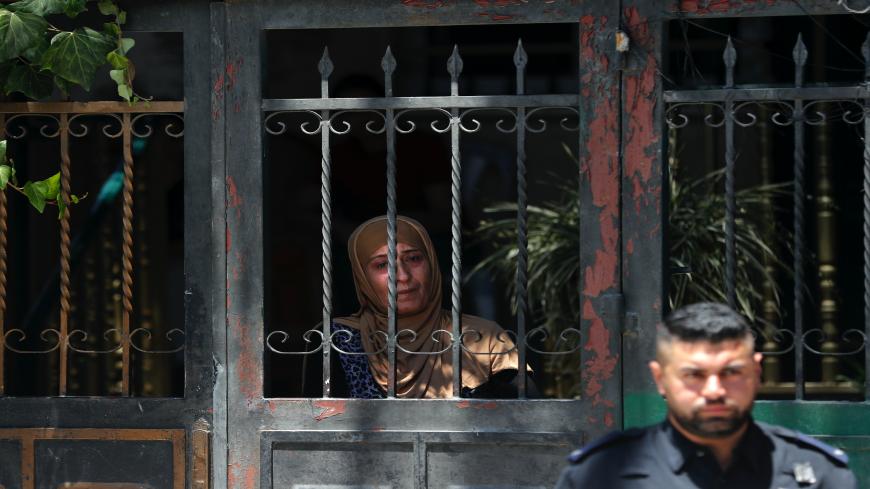 An Israeli policeman stands outside the former house of the Palestinian Siyam family as a member looks from a gate, during their eviction in the Palestinian neighborhood of Silwan in east Jerusalem near the Old City on July 10, 2019. - AHMAD GHARABLI/AFP via Getty Images

In the Old City of Hebron in the southern West Bank, Palestinians built an iron fence in a number of alleys and squares to protect themselves from the stones and trash constantly thrown by settlers in a bid to drive Palestinians to other Palestinian towns.

Imad Abu Shamsiyeh, coordinator of the Human Rights Defenders Association in Hebron, told Al-Monitor, “The Palestinians in the Old City of Hebron are placing metal nets in alleyways and yards located close to settlements to protect themselves from settler attacks, trash, stones and Molotov cocktails.”

“The Old City stretches over 5 kilometers and is home to about 7,000 Palestinians. There are also several Israeli settlements in the town, such as Beit Hadassah, Avraham Avinu, Beit Romano, Tel Rumeida and a religious school, and they include 800 Israeli settlers protected by 2,500 Israeli soldiers,” Abu Shamsiyeh continued.

He also indicated that between 2014 and 2021, settlers seized several Palestinian houses belonging to Al-Zaatari, Al-Rajabi and Abu Rajab families, among others.

He said that “the [Israeli] occupation divided the Old City into several areas that are home to Israeli settlers alone without Arabs. Also, it installed several electronic gates and Israeli checkpoints across the Old City on roads leading toward the Ibrahimi Mosque, and it allowed settlers to shop from the Arab Old City markets, thus subjecting Palestinians to direct attacks.”

He pointed out that “the Israeli authorities have confiscated several Arab houses in the Old City of Hebron and set up more than 20 checkpoints with electronic gates and surveillance cameras, mainly near the area surrounding the Ibrahimi Mosque, in a bid to monitor the movement of Palestinians and facilitate the movement of settlers within the town.”

Abu Shamsiyeh said, “The Israeli occupation is substantially impeding the movement of Palestinians in the town, as it placed the Sahla neighborhood under full Israeli control. It also set up electronic gates and military checkpoints in the Salaymeh and Ghaith neighborhoods, which are located close to the Ibrahimi Mosque. The Israeli army only allows Palestinians in [the mosque] from 6 a.m. until 8 p.m.”

On Jan. 15, 1997, the Palestine Liberation Organization and Israel signed the Hebron Protocol, which provides for the division of the city into two parts: Area H1 covering 80% of the total area of ​​the city and subject to Palestinian security and administrative control, and Area H2 covering 20% of the city’s area, which mainly includes the Old City in the center of Hebron and is subject to Israeli security control. According to the protocol, the Hebron municipality is responsible for the services provided to residents of this area.

Abd al-Hadi Hantash, member of the Land Defense Committee in the West Bank and a researcher in settlement affairs in Hebron, told Al-Monitor, “The repeated Israeli attacks on the residents of the Old City of Hebron have prompted some Palestinians to install iron nets inside their yards to protect themselves.”

“The number of Palestinians living in the Old City has decreased from 30,000 to 10,000 [in past years] as a result of the Israeli harassment and settler attacks,” he lamented.

He explained, “The fact that Israel gave the Kiryat Arba settlement the status of a municipality has enabled it to annex all the settlement outposts located in the heart of Hebron thereto.”

“Israel took advantage of the Hebron agreement in 1997 to push ahead with more settlements and continuously Judaize the Old City,” Hantash said.

Hantash also said that the Old City of Hebron is witnessing a remarkable increase in settlement operations and seizure of Palestinian homes.

Such activities, he continued, peaked when Israel declared in 2010 the Ibrahimi Mosque as part of the Jewish heritage. Israel, he said, alleges that Abraham is a Jew and Muslims have seized the sanctuary. This has led to the Israeli seizure of more than 60% of the mosque to turn it into a synagogue, Hantash said, adding that it turned into the only site in the world with both a synagogue and a mosque.

Hantash added “The Temporary International Presence in Hebron failed to curb the settlers’ attacks. The observers only documented the Israeli attacks and conveyed them to their officials. Settlers also formed Zionist gangs like the Hilltop Youth and launched several attacks against Palestinians.”

Issa Amro, founder of the Youth Against Settlements group in Hebron, told Al-Monitor, “The Israeli measures and the continuous settlers’ attacks in the Old City of Hebron have caused the closure of more than 1,800 shops, as well as the displacement of 43% of the residents of the town, which has turned into a ghost city.”

“The Israeli occupation changed the names of a number of streets in the Old City of Hebron to Hebrew names. Al-Shuhada Street was named King David Street while Jaber Street was named the Jewish Quarter Street, with the aim of concealing their Arab identities,” he added.

He continued, “Judaization is still ongoing in both the Old City and the Ibrahimi Mosque, where 300 square meters have been confiscated to build an elevator for settlers.”

Amr stressed that “in light of the coronavirus pandemic, Israel applied the civil law in the Ibrahimi Mosque," which prevents Palestinian worshippers from entering the site based on the timing of [prayers] at the Jewish synagogues. This shows that the Ibrahimi Mosque is subject to full Israeli sovereignty as part of the Israeli annexation plan.