Israel has approved a project near the Ibrahimi Mosque in Hebron in another step toward annexation. 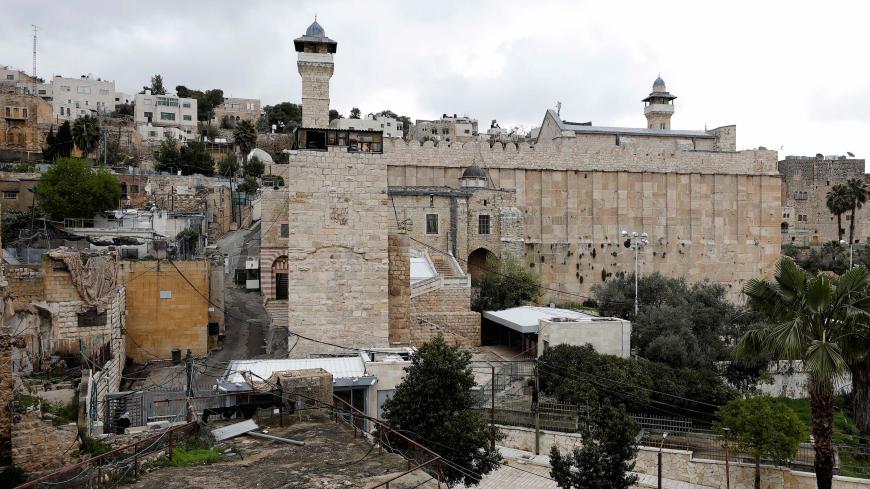 The Ibrahimi Mosque, adjoining the Jewish Tomb of the Patriarchs, is seen closed during Friday prayer over concerns of the spread of the novel coronavirus, in Hebron in the Israeli-occupied West Bank, March 20, 2020. - REUTERS/Mussa Qawasma

RAMALLAH, West Bank — Israeli Defense Minister Naftali Bennett issued an expropriation order May 12 for a portion of the Ibrahimi Mosque in Hebron, in the southern West Bank, part of a project to build an elevator to facilitate access to the mosque.

In response, head of the General Authority of Civil Affairs of the Palestinian Authority Hussein al-Sheikh tweeted that Bennett’s decision “to confiscate and annex parts of the Ibrahimi Mosque in Hebron abolishes the Hebron protocol and puts an end to the agreement signed between the PLO and Israel, as well as constitutes a continuation of the annexation project in the West Bank and Jerusalem.”

Israel’s Defense Minister Naftali Bennett approved a settlement project in the southern West Bank city of Hebron May 3. The project involves the seizure of Palestinian lands to building a corridor and an elevator to facilitate access to Ibrahimi Mosque.

According to Maariv, Bennett instructed Israeli military liaison to the Palestinian territories Maj. Gen. Kamil Abu Rokon to take all necessary measures to implement the project without delay. Israel’s judicial authorities and Prime Minister Benjamin Netanyahu had endorsed the project.

Israel will expropriate land of a size yet to be determined in the vicinity of Ibrahimi Mosque, owned by the Islamic Waqf or religious endowment in Jerusalem. The measure is another step in Israel's quest to take over the mosque, located in Area H2 in Hebron, which falls under Israel’s full control.

The Israeli ambitions for the Ibrahimi Mosque started to clearly emerge in 1994, after settler Barokh Goldestein massacred 29 Palestinian worshippers. Israel then seized the back part of the mosque that includes the shrines and tombs of prophets and historical figures.

Three years after the massacre, in 1997, the Palestinian Authority and Israel signed the Hebron Protocol, giving the PA parts of the city of Hebron, known as Area H1, some 80% of the city’s total area. Israel took control of the remaining area, where the Old City and the mosque are located.

With its external courtyards, the mosque extends over 4,750 square meters. Israel controls 63%, while the remainder is entrusted to the Waqf, according to Hafthi Abu Sneineh, director of religious endowments in Hebron.

Abu Sneineh told Al-Monitor that Palestinian visitors and worshipers must pass through several Israeli military gates and barriers inside the Old City to access the mosque.

The Israeli project’s approval comes in the midst of Israel’s annexation scheme for parts of the West Bank, including the Jordan Valley and settlements, and parts of the city of Hebron in the coming weeks, in implementation of the US peace plan for the Middle East. On May 6, US Ambassador David Friedman to Israel said his country was “ready to recognize” the annexation.

Abu Sneineh described the new project as an attack on the sanctity of the 2,000-year-old mosque. “The Israeli authorities did not notify the Islamic Waqf in charge of managing the mosque of the details of the project. The settlement project will facilitate the Judaization of Ibrahimi Mosque. It will change its features so as to satisfy the settlers and consecrate occupation.”

He noted that Israel is taking advantage of the world's preoccupation with the coronavirus pandemic to implement its settlement projects in the city.

The new plan is one of several projects targeting the Ibrahimi Mosque and Hebron’s Old City. It is the practical implementation of Israeli plans to annex the area and impose sovereignty over it. Netanyahu had made similar promises when he visited the mosque Sept. 4, 2019. He vowed to keep settlers in Hebron. On Sept. 16, 2019, he declared for the first time his intention to annex Kiryat Arba settlement and Jewish areas in Hebron, in case he remained prime minister.

The recent Israeli approval of the project in Hebron sparked Palestinian condemnation. The Palestinian Ministry of Endowments and Religious Affairs said in a statement May 4, “The Israeli policy regarding the Ibrahimi Mosque is provocative and filled with greed and hypocritical intentions. Israel is trying to take over the mosque gradually, yet completely, after having seized most of it.”

PA President Mahmoud Abbas has repeated on several occasions, most recently during his meeting with Fatah’s Central Commission May 5, that the PA will end all its agreements with Israel if the latter attempts to annex any Palestinian territories.

Meanwhile, the Palestinian Ministry of Endowments and Religious Affairs said in a May 7 report that Israeli authorities banned calls to prayer at the Ibrahimi Mosque 56 times during the month of April.

Several settlement projects have been looming over Hebron. On Dec. 1, 2019, Bennett approved a plan to build a new settlement neighborhood near Hebron's fruit and vegetable market. The neighborhood project requires destroying existing buildings in the area to build shops and 70 new residential units for settlers, according to Haaretz.

Khalilia noted, “The settlement projects in Hebron’s Old City coincide with real measures to segregate citizens from their towns to forcibly displace them.” He asserted that hundreds of Palestinian families have left the Old City and closed their stores in recent years, and Israel has found a golden opportunity for its main quest to annex the area.

It was not surprising that Israel approved a new settlement project around the mosque, as it has been treading in this direction since US President Donald Trump announced his peace plan and with the Knesset’s approval of a national unity government between Netanyahu and Blue and White leader Benny Gantz.